No patrols, but Japan helping in South China Sea in other ways 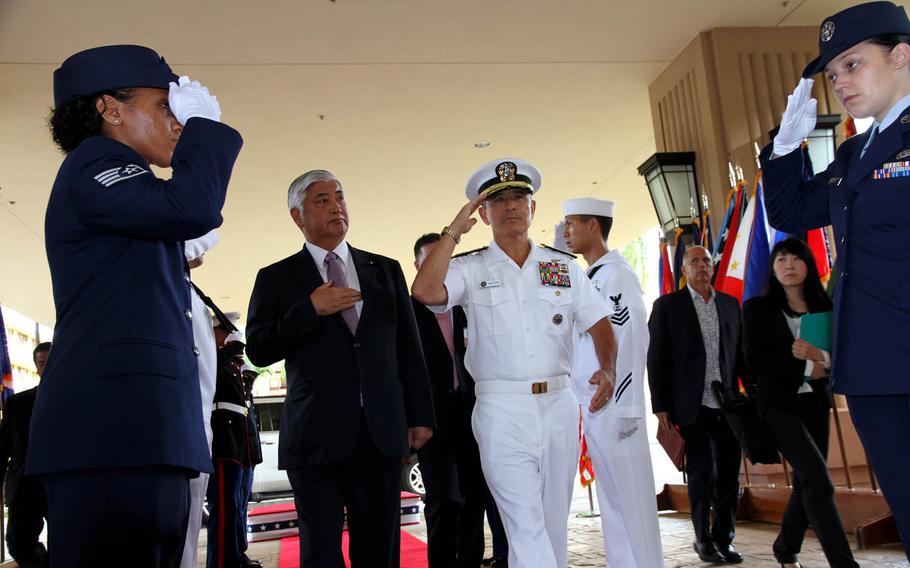 CAMP H.M. SMITH, Hawaii — Japan has no plans to conduct freedom-of-navigation patrols near islands claimed by China and other nations in the South China Sea but is contributing to stability in the area in other ways, the country’s defense minister said Tuesday.

“I believe it is important for the international community to protect the open, peaceful and free ocean, because this is an important concern on the part of Japan as to the security of sea lanes and freedom of navigation,” Gen Nakatani, head of the Japan Defense MInistry, said through an interpreter while taking questions from reporters at U.S. Pacific Command headquarters. “As of now, we don’t have any specific plan for constant surveillance activity.”

“We have not been given any specific orders to do something in the South China Sea,” he said.

Nakatani, who arrived Sunday on his first visit to Hawaii as defense minister, flew in from Australia, where he met with his counterpart there. On Monday, Nakatani met with Brig. Gen. Christopher Mahoney, deputy commander of Marine Forces Pacific, and Gen. Vincent Brooks, commander of U.S. Army Pacific. Nakatani visited several military installations, and in the afternoon laid a wreath during a ceremony at the USS Arizona Memorial.

Nakatani met for about an hour with PACOM commander Adm. Harry Harris Jr., on Tuesday.

“The importance of the alliance between Japan and the United States cannot be overstated,” Harris told reporters before the meeting. “The strong alliance between our two countries has formed a bedrock upon which security and prosperity in the East Asia region has flourished for the last 70 years.”

Neither Harris nor Nakatani mentioned China by name, but that country’s claim over most of the South China Sea was the undercurrent of their mutual declarations of defense cooperation. China has been busily expanding mostly submerged reefs in the sea by dredging sand to create small islands, on which it has built runways and other facilities.

The sea, with rich fishing grounds and potential petroleum and mineral deposits, is a major shipping lane between Asia and the West where $1.2 trillion in trade transits each year. The U.S. has been adamant that the sea remain open to shipping, claiming that China has been “militarizing” the artificial islands.

“Both countries share a commitment to ensuring peace and security in the region,” Harris said of the U.S. and Japan. Beefing up the trilateral military relationship among Japan, America and Australia is a priority, he said.

Harris also mentioned the need for Japan to build stronger ties with South Korea. The countries’ relationship remains icy over unresolved issues going back to Japan’s occupation of Korea, which ended in 1945.

In April, the U.S. and Japan revised their defense cooperation agreement to give Japan more leeway in participating in humanitarian relief and peacekeeping missions outside its immediate region. The updated agreement will “enhance the deterrence and response capability of the alliance,” Nakatani said.

Japan has contributed to stability in the South China Sea by helping Southeast Asia countries build their naval capacity, he said.

Japan agreed in October to give Vietnam about $1.66 billion in aid for maritime safety and promised to gift additional used patrol boats — some had already been delivered — down the line for civilian maritime law enforcement. Earlier this year, Japan sent two destroyers to the Philippines for bilateral naval exercises.