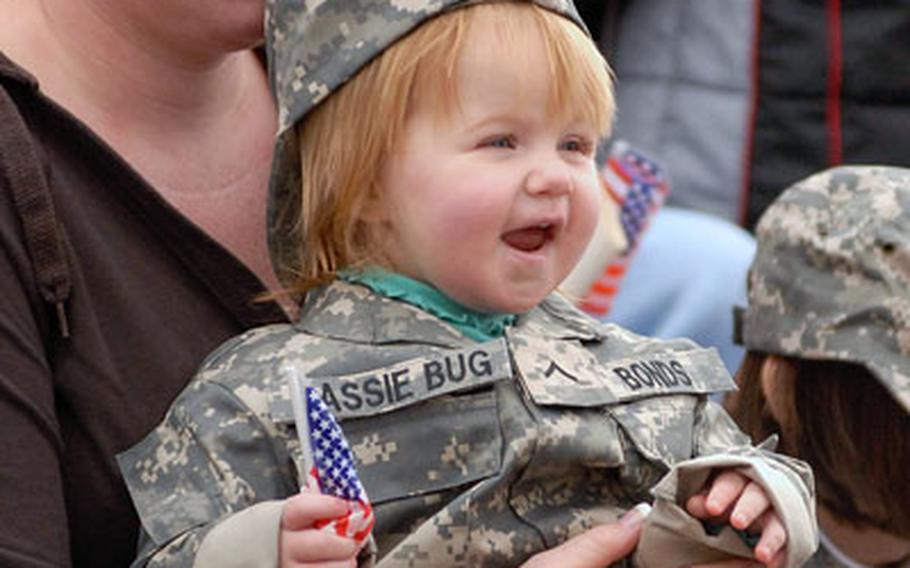 Jessica Bonds, along with her daughters Kassie and Katie (partially hidden at right), watch the 2nd Brigade Combat Team in formation during a welcome home ceremony in Baumholder, Germany, on Wednesday. While official homecoming ceremonies such as this will continue, the fun-filled celebrations are being scaled back because of budget constraints, Army officials say. (Ben Bloker / S&S)

In response to continuing financial strains, U.S. Army Europe has canceled all welcome home celebrations for units returning from deployment through this fiscal year, halting the tradition of free food, rides and other community festivities for returning soldiers and their families.

In a memo dated Dec. 19, Installation Management Command-Europe director Russell Hall said that USAREUR leadership had discontinued the events until the end of the fiscal year on Sept. 30.

The action was deemed necessary as a result of challenges posed by &#8220;minimal funding to support core program operations&#8221; within IMCOM-Europe&#8217;s Morale, Welfare and Recreation Single Fund, Hall states in the memo.

USAREUR will continue to host the formal welcome-home ceremonies for returning units, where the soldiers march in formation and the colors are unfurled, according to Lt. Col. Liz Hibner, a USAREUR spokeswoman.

But the celebrations &#8212; full of free food, beer and, typically, some form of big-name entertainment &#8212; will be no more. As of press time Thursday, USAREUR was unable to say how much the command would save by canceling the events, or what a celebration typically costs.

One of the largest units to be affected by the decision will be the 1st Armored Division&#8217;s 1st Brigade, based in Friedberg, Germany. Deployed since January of 2006, brigade soldiers found out in September that their deployment would be extended by about six weeks, bringing them home in March instead of January this year.

A formal welcome-home ceremony and unfurling of the &#8220;Ready First&#8221; colors is scheduled for March 6, said Maj. Wayne Marotto, a 1st AD spokesman.

The Darmstadt, Germany, based 2nd Military Intelligence Battalion is another unit returning soon that will not have a celebration, as will Company A of the 1st Battalion, 6th Infantry Regiment, the last unit of the 1st Armored Division&#8217;s 2nd Brigade to return from a deployment to Iraq.

Both units are slated to come back to Germany this month.

In Baumholder, Germany, where the 2nd Brigade is based, local leadership is considering some sort of potluck supper for the returning company in place of a command-sponsored event, said Ignacio Rubalcava, a spokesman for the Baumholder garrison.

&#8220;There is no money for welcome homes,&#8221; Rubalcava said Thursday, adding that even a potluck at the Rhinelander Club on Smith Barracks might have monetary issues attached. &#8220;[Garrison leaders] want to do something for the unit.&#8221;

But any kind of potluck for the company and its family members would have to be funded and supported by people in the community, he said.