No more TOWs at Korea's Rodriguez range after stray round 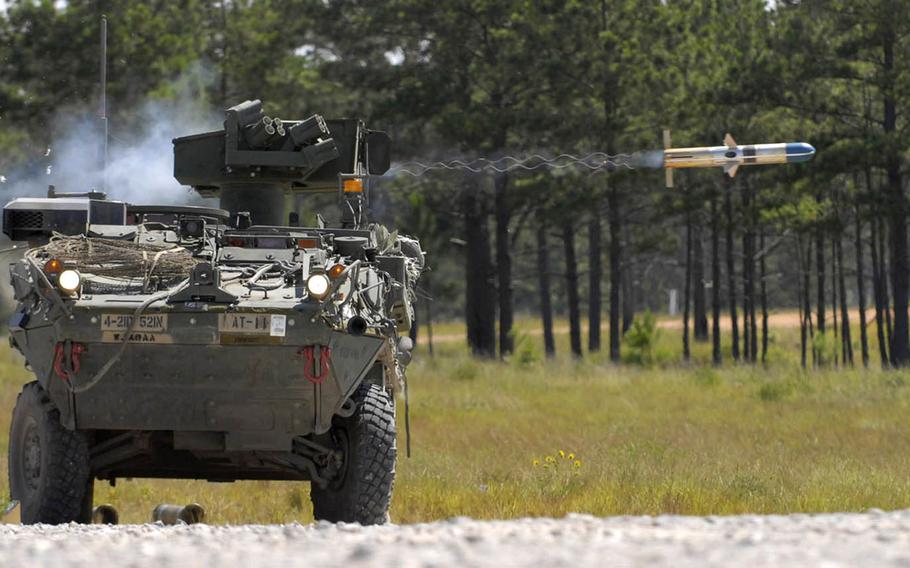 A Stryker vehicle fires a tube-launched, optically-tracked, wire-guided missile at Fort Polk, La., in 2009. The U.S. military will no longer launch TOW missiles at Rodriguez Live Fire Range, South Korea, after an investigation into a stray round at the training complex. (Victor Ayala/U.S. Army photo)

The U.S. military will no longer fire tube-launched, optically tracked, wire-guided missiles at Rodriguez Live Fire Range after an investigation into a stray round at the training complex in South Korea.

Training was suspended and an investigation launched after a TOW anti-tank missile struck an abandoned building 200 meters outside the range boundary within Pocheon’s city limits on Dec. 30. There were no injuries.

“The investigation … has determined that the missile malfunctioned due to a faulty guide wire, resulting in an inability to communicate with the fire control system,” Eighth Army spokesman Col. David Patterson said Wednesday.

The probe, ordered by Maj. Gen. Richard Simcock II, 3rd Marine Division commander, also determined the Marines involved observed all necessary preparations and safety precautions, and that the incident was not the result of mishandling or poor gunner tracking, Patterson said.

“As a result of this incident, Eighth Army Commanding General Lt. Gen. Thomas Vandal has directed that units will no longer fire TOW missiles at (Rodriguez range) out of concern for potential mishaps and the safety of the population in surrounding areas,” he said.

Rodriguez Live Fire Range is a 3,390-acre complex used year-round by both U.S. and South Korean forces. While most of the surrounding area is rural, residents have long voiced complaints about noise, fires and other incidents.

Last March, a non-explosive 105mm training round fired by a Stryker armored vehicle damaged the roof of a nearby home. Locals angered by the incident protested the following month, calling for an end to gunnery at the range after 10 p.m.