No more pre-deployment clowning around for USAREUR 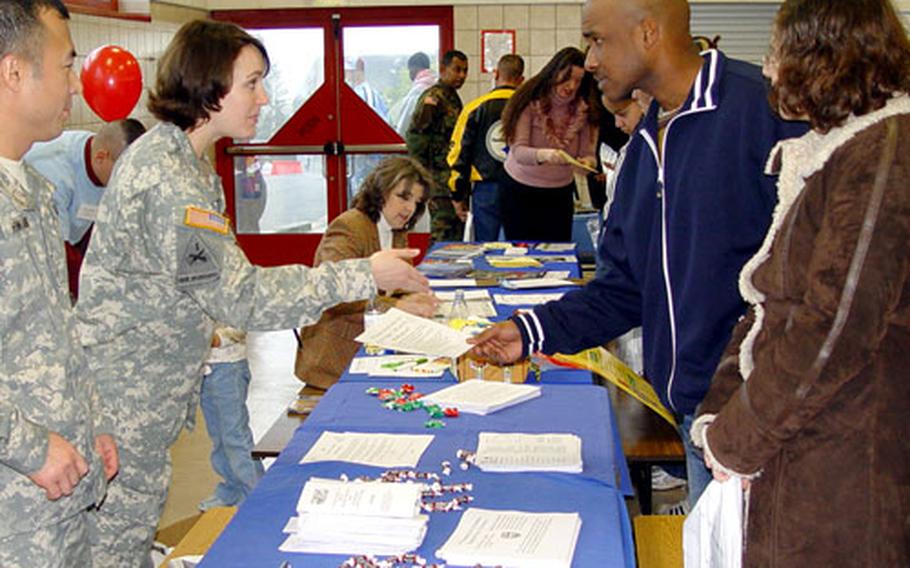 GIESSEN, Germany &#8212; In the spring of 2003, just before troops from Giessen and Friedberg deployed to Iraq, military and community leaders held a &#8220;fair&#8221; for families and soldiers that featured experts on various subjects relating to deployment.

Giessen and Friedberg weren&#8217;t alone. Pre-deployment family readiness conferences were convened in many U.S. Army Europe communities. The gatherings gave families the opportunity to get information on a variety of subjects, ranging from health care to military pay to school bus routes.

Some were low-key events, others less so. In Wiesbaden, for instance, a balloon-twisting clown named Filou rode a unicycle around the venue to liven things up.

Today, with 1st Armored Division units either in or heading to Iraq for a second lengthy tour, pre-deployment readiness gatherings are back on the community calendar, only now things are more refined.

Lessons learned from past deployments coupled with some new Army programs have elevated the effort to keep families connected with soldiers and units.

At a two-day pre-deployment event last weekend in Butzbach, a bedroom community between Giessen and Friedberg, 1,500 people turned out to meet the experts. They came to tie up loose ends, such as filling out paperwork for power of attorney, and to inquire about other matters of interest.

In March 2003, when a similar gathering was held, community officials called it a &#8220;Deployment Fair,&#8221; said Kathy Monge, the ACS mobilization and deployment specialist for the U.S. Army Garrison Giessen. The word &#8220;fair,&#8221; she said, was left out this time because it implies a degree of levity that, given the situation in Iraq, obviously doesn&#8217;t fit.

At the Butzbach event there were Department of Defense Dependents Schools officials, finance folks, law experts, personnel people, representatives from the Army and Air Force Exchange Service, banking specialists and even ADAC, the German emergency auto service. Other organizations were represented, too.

Monge intentionally kept her welcome and introductory speech short. Two years ago, the briefing lasted upward of an hour, and people noticed.

Misty Adame said she and her husband, Sgt. Paul Adame, attended the 2003 fair. The opening remarks &#8220;were long and drawn out,&#8221; she recalled, and the couple left early, mainly because the place was so crowded.

The adjustments made in pre-deployment family briefings are, in part, a result of the 2003 experience, Burcham said. Programs then were more &#8220;geared toward a six-month deployment,&#8221; such as to the Balkans.

Over time, the Army has learned to use pre-deployment briefings to not only get families squared away on necessary paperwork, but also to inform them of all the initiatives that have sprung up in the past few years. They include programs such as Soldier and Family Life Consultants, Army OneSource, and virtual Family Readiness Group.

The Army, Burcham said, has become &#8220;a lot more responsive and capable [on family readiness issues] than it was two years ago.&#8221;