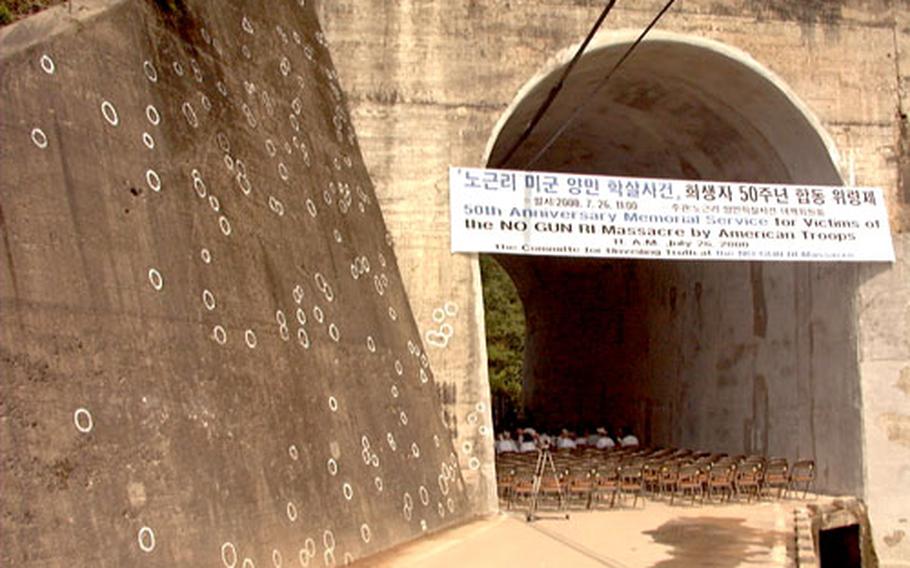 Buy Photo
At a ceremony in 2000, white circles show where bullets struck a railroad trestle at No Gun Ri, South Korea, 55 years ago. A few weeks after North Korea invaded the South in 1950, a horde of Korean refugees walked to the village of No Gun Ri, where hundreds of them reportedly were killed by the U.S. military. (Stars and Stripes)

SEOUL &#8212; Four years after an American government promise to build a memorial and scholarship program to honor the Korean War&#8217;s civilian casualties, little has happened either to remember those killed or to help educate those left behind, Korean and American leaders acknowledged in recent interviews.

The U.S. stands behind its pledge to honor civilian victims, American officials have said in prepared statements. But one Korean activist group says the effort is an attempt to mask the events of one particular tragedy &#8212; No Gun Ri.

&#8220;It is an attempt to avoid the responsibility,&#8221; said Chung Koo-do, who along with his father has spent decades trying to convince the American government that their family&#8217;s memories of No Gun Ri &#8212; the place where hundreds of civilians were killed during the Korean War &#8212; are true.

In the last few days of July 1950, only a few weeks after North Korea invaded the South, a horde of Korean refugees walked to the village of No Gun Ri. Koreans who were there say the U.S. military forced the people to migrate to the village, then opened air attacks and spent four days shooting at villagers who took shelter in a tunnel, killing hundreds.

An Associated Press report in 1999 quoted Korean survivors, soldiers who were there and military documents saying the massacre happened. The Pentagon then spent thousands of hours researching what happened on those days from July 26 to July 30 in 1950.

The U.S. military investigation results were released in early 2001. It found that while dozens, perhaps hundreds, of Koreans were killed in the area in those days, there was no evidence that showed the bombings took place or that any soldiers had explicit orders to fire upon civilians.

The Pentagon called the incident &#8220;tragic and deeply regrettable,&#8221; saying it occurred &#8220;during a retreat in a desperate situation, in which U.S. soldiers were conducting operations to stem the invasion of South Korea by the North Korean Army.&#8221;

As the report was released, President Clinton made a pledge for the memorial and a scholarship fund. The pledge, however, was meant to honor &#8220;civilians who suffered at No Gun Ri and other places during the Korean War,&#8221; the U.S. embassy spokesman in Seoul said this month.

The families from No Gun Ri have refused that offer, according to Chung and a spokesman at the Korean Ministry of Foreign Affairs and Trade. People like Chung see the Americans&#8217; proposal as a blanket apology for many tragedies in the war rather than an admission of specific wrongdoings at No Gun Ri.

Robert W. Ogburn, the embassy spokesman, acknowledged that the process to honor the victims has been slow, though the U.S. is currently working with the Korean government to establish some guidelines and eligibility requirements for the scholarship program.

In 2004, the Korean Assembly passed its own legislation to honor No Gun Ri&#8217;s victims, according to the Ministry of Government Administration and Home Affairs spokesman Choi Won-mun.

The legislation is an attempt to locate the surviving victims and their families, Choi said. The package includes plans to build a memorial and museum at the No Gun Ri site, which is 155 miles south of Seoul. Currently, the price is estimated at $10 million, though that spending still needs Assembly approval.

The Pentagon sets aside about $500,000 each year for the scholarships, though that money goes unspent because there are no applicants, a spokesman said.

The Americans, however, have spent $200,000 so far on designs for the memorial, Pentagon and State Department spokesmen said.

One Seoul architect said the U.S. paid him $6,000 to start working on a design, but he hasn&#8217;t heard from the Americans in years. Lee Un-sik said he was one of a handful of people asked to present a design in 2001. He has yet to get official word about his entry.

His father began trying to call attention to their deaths in the 1960s. Now, he is 85 and Chung has taken up the burden of telling his family&#8217;s story.

In response to written questions about the proposed No Gun Ri memorial and scholarship fund, Pentagon officials released the following statement:

&#8220;In January 2001, then-President Clinton issued a statement expressing deep regret for the incident. At that time, the U.S. also announced its intention to build a memorial and to establish a scholarship fund in honor of all of the innocent Korean civilians killed during the war. There are funds set aside by the U.S. government for this purpose.

&#8220;We consider these actions symbolic of our deep regret for the incident. As well, these actions express deep sympathy to the victims&#8217; families and for the pain they suffered in their efforts to gain acknowledgment of the tragedy.

&#8220;In 2001, the Department of Defense allocated money for the monument. A portion of the fund has been used to develop a design from a Korean firm for the monument. Although design has been completed, construction has not yet begun on the project.

&#8220;Since 2001, the Department of Defense has set aside roughly $500,000 each year to fund the scholarship program. Each year the funds have been returned because there have been no applicants for these scholarships, but they are still available.

&#8220;What befell civilians in the vicinity of No Gun Ri was a tragic and deeply regrettable incident during a retreat in a desperate situation, in which U.S. soldiers were conducting operations to stem the invasion of South Korea by the North Korean Army.

&#8220;We will not forget the sacrifices of U.S. and South Korean soldiers and of all innocent civilians who died during the war. It is our hope that we will commemorate their lives by moving forward, continuing to work to strengthen the ties between the American and Korean people and for peace and stability in the region.&#8221;