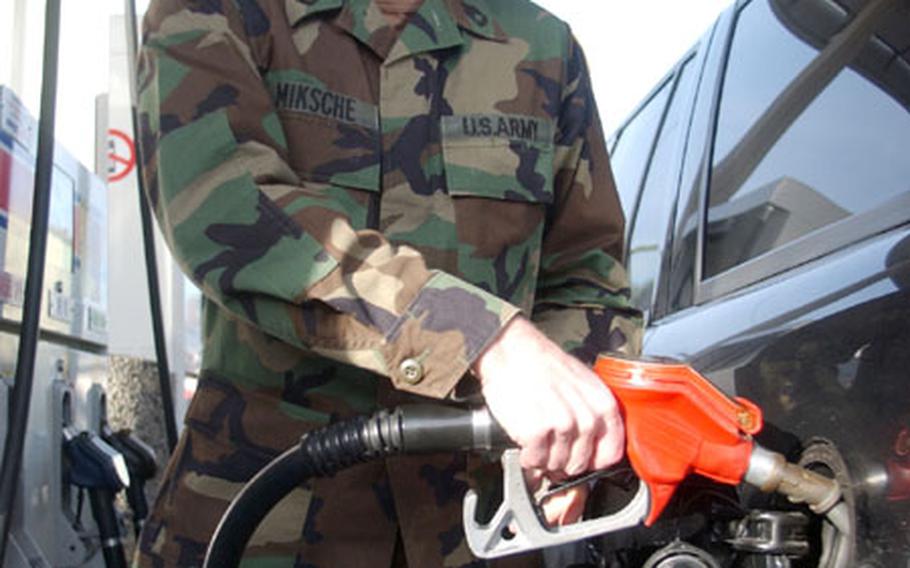 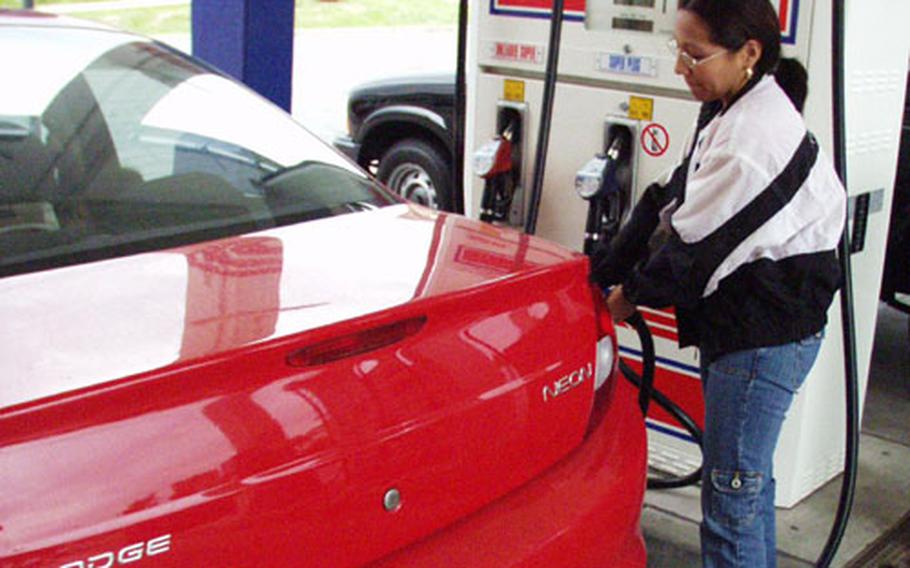 Nellie Ramirez fills up her car at an AAFES gas station in Darmstadt, Germany, on Wednesday. (Ward Sanderson / S&S)

In July, prices charged by the Army and Air Force Exchange Service in the Netherlands plunged by as much as 19 cents a gallon. At the same time, gas prices went up in Britain and Germany.

AAFES officials say gas prices in all three countries are tied to U.S. fuel prices, which went down in July.

For fuel customers, or crossword fans, it can equate to a four-letter word starting with &#8220;W&#8221; and exclaimed in confusion.

Exchange officials say they can explain it to customers such as Spahr, but it&#8217;s not simple.

Exchanges in those three countries sell gas or redeemable coupons at prices reset each month to mirror U.S. trends. But hitting that target price is more of a goal than a reality, according to AAFES, because buying fuel from several sources abroad makes hitting a uniform price impossible.

In the case of the Netherlands, a drop in wholesale costs meant a drop in AAFES retail prices &#8212; despite retail costs rising at some other posts in Europe, according to Maj. David Accetta, spokesman for AAFES Europe.

Though the exchange attempts to mirror U.S. Energy Department averages, prices still vary from it. Prices can also deviate if the AAFES commander, Maj. Gen. Kathryn Frost, manipulates them to keep them lower.

She did so in May and June but not in July, which contributed to hikes seen in Britain and Germany.

Fuel on the fire

Not everyone is affected by these monthly adjustments.

Unlike the three previously mentioned nations, prices in some countries, such as Turkey, are set annually, meaning the price remains the same for 12 months.

And although coupons are sold at AAFES or Navy Exchange stores in Italy and Spain, the prices are set by a U.S. Navy contract.

In any case, gas comes from local suppliers, meaning prices can fluctuate from country to country. And to make matters more of a migraine, they fluctuate independently of the U.S. averages.

The exchange&#8217;s July decrease in price in one country while raising prices in two others seemed to throw fuel on the fire for those who criticize AAFES pricing.

Exchange prices in Britain, Germany and the Netherlands are adjusted by looking out the rearview mirror: Prices are adjusted based on the previous four or five week&#8217;s selling price of gas in the United States.

That means prices in the States can go down, while AAFES prices go up that same month. The reverse is also true.

The system angers Jim Crook, a customer in Hanau, Germany.

&#8220;AAFES gets gas from gas vendors here in Germany and some other neighboring countries, not the States,&#8221; Crook wrote in a letter to Stars and Stripes. &#8220;So why does AAFES always want to raise its gas prices because the States raise their gas prices? If Germany or the countries from which AAFES gets its gas from raise the price, I could understand about a price hike.&#8221;

Accetta said attempts to reflect U.S. prices began in 2001 after customer complaints. The exchange before had based its prices on a model that more closely followed normal supply-and-demand economics.

Nonetheless, commuting troops ask: The exchange price may be cheaper than European retail, but why does it still have to be so much? And who gets this money and why?

Spahr decided to spar. He wanted an explanation as to how much AAFES paid for its own gas, so he filed a Freedom of Information Act request.

He found out that during the month of May, the exchange charged from 78 cents to 91 cents above the raw cost it paid for fuel in Germany. A similar request made by this newspaper in 2001 &#8212; before the exchange attempted to follow Energy Department trends &#8212; showed the exchange previously added about $1 to the base cost per gallon.

According to data supplied to Stripes late last year, on a representative month when AAFES purchased gas for $1.02 per gallon in Germany, had dispensing costs of 20 cents per gallon and sold the gas for $1.70 per gallon, the result was a profit of about 48 cents.

The exchange counters that it exists to do two things: Offer goods and services at low prices, and to make money for Morale, Welfare and Recreation programs.

Some soldiers still wonder about the purpose of the profit.

That money goes into the general MWR fund, according to Millie Waters, a spokeswoman for the Army&#8217;s Installation Management Agency in Europe. The money that goes into MWR goes toward things such as golf courses, libraries, sports and recreations facilities, do-it-yourself automotive centers, arts and crafts shops, and leisure travel services.

Exchange critics also complain that AAFES does not pay the gas taxes that help set U.S. prices; therefore, its retail price should be lower.

In a sense, the money the exchange makes on gas &#8212; and everything else &#8212; can be seen as both its profit and its tax: It pays for MWR and also subsidizes stores that aren&#8217;t as profitable to keep costs down for troops deployed to Iraq, Kosovo and other areas.

The money the exchange charges, Accetta said, includes the cost of its products and services; capital improvements like the new mini-mall that opened in Aviano, Italy, this month; and earnings for MWR.

All told, 63 percent of AAFES&#8217;s total earnings from the sale of shoes, shirts, DVDs, fuel and other items go toward MWR programs. Last fiscal year that worked out to $11.8 million for U.S. Army Europe, and $5.5 million for U.S. Air Forces in Europe, according to AAFES.

Accetta also said that earnings from profitable stores help keep prices down in places such as Iraq.

Exchange employees volunteer for six-month or one-year tours in hazardous duty areas. Accetta said all of that makes AAFES different from a corporate department store.

Despite that, whenever gas prices rise, American blood boils. Nellie Ramirez, an Army wife who recently filled up at an AAFES station in Darmstadt, Germany, may be an exception by circumstance.