No glory behind the scenes, but maintainers are crucial Staff Sgt. Edwin L. May and Airman Linnon Lathan work on an F-15 in the hangar at Bitburg Air Base, Germany, in November, 1979. (Gus Schuettler / S&S)

Staff Sgt. Edwin L. May and Airman Linnon Lathan work on an F-15 in the hangar at Bitburg Air Base, Germany, in November, 1979. (Gus Schuettler / S&S) 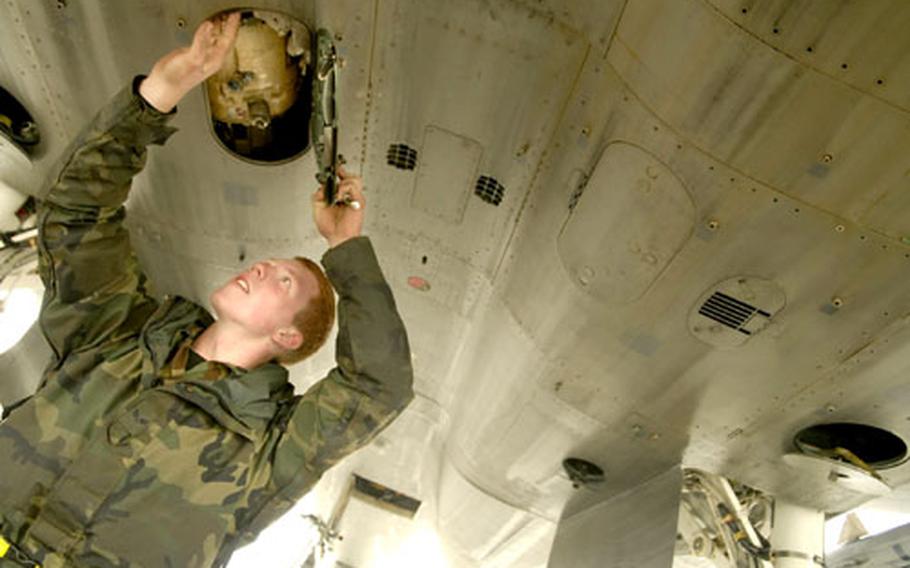 Pilots still seem to get most of the attention and glory. But as airframes get older, the work of those who turn wrenches and keep the aircraft in good repair gets more important. And receives more attention.

Not that they&#8217;ll likely end up in the spotlight.

Pilots these days are more than willing to spread some of the glory around, though.

A coupl of pilots assigned to the 510th Fighter Squadron at Aviano Air Base in Italy said they don&#8217;t fear for their safety because of the age and flying hours put on the F-16s they fly. They credit their counterparts in maintenance for that confidence.

First Lt. Jacob Conger said he drives a 2003 Nissan Acura to and from the base. But he said he can fly a jet more than a decade older at much higher speeds because of the care that it receives from base maintenance crews.

Maintainers themselves use car analogies.

&#8220;Just like a car, [an airplane] gets older and needs more maintenance to keep it up and running,&#8221; said Master Sgt. Kiwon Kim, who works on KC-135 Stratotankers at the 100th Air Refueling Wing at RAF Mildenhall, England.

When the 510th deployed to Iraq last year, pilots and maintainers faced a number of challenges.

The in-flight incidents were resolved as soon as the pilot landed, but they illustrated the potential problems that can arise from aging aircraft.

Carden said maintainers don&#8217;t get a lot of time off these days &#8212; especially with the Air Force&#8217;s decision to eliminate jobs around the service to pay for the newer aircraft it says it needs.