No free ride for abandoned cars on Okinawa bases 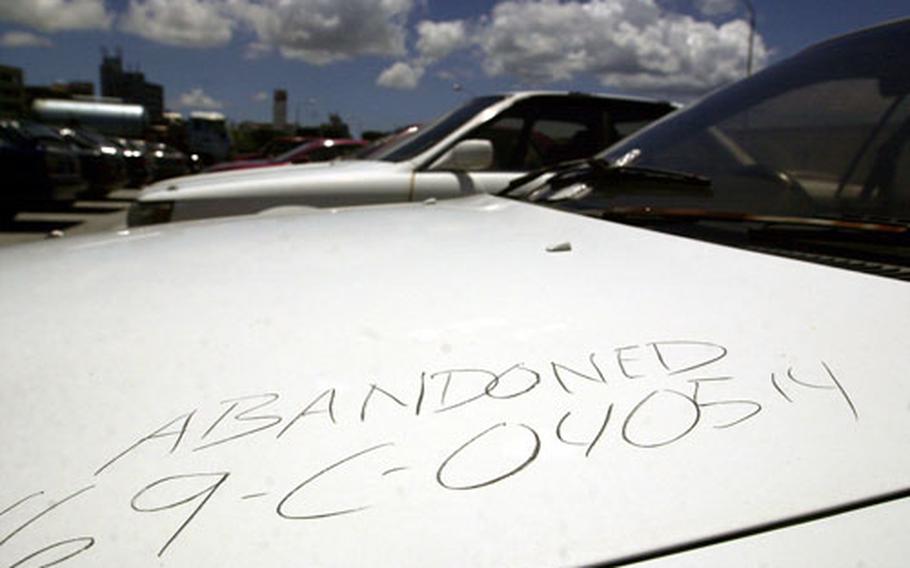 An abandoned car sits in the Joint Services Vehicle Impound Lot on Camp Kinser among other vehicles illegally dumped by their owners when they left Okinawa. Those who don&#39;t properly sell or scrap their vehicles when they leave will pay fines and fees eventually through either a pay check deduction or out of their Income Tax refund. (Fred Zimmerman / S&S)

CAMP FOSTER, Okinawa &#8212; With prime military moving season in full swing, the Provost Marshal&#8217;s Office issued a reminder that hitting the road without properly selling or scrapping a vehicle could cost servicemembers and Department of Defense civilian employees $300 to $400 in penalties.

But abandon your vehicle, warned Marine Staff Sgt. Robert T. Bergen, and &#8220;one way or another, you&#8217;re going to pay for it.&#8221; Bergen is staff noncommissioned officer in charge of Camp Kinser&#8217;s Joint Services Vehicle Impound Lot.

If the owner is found and still is on the island, he said, the vehicle can be reclaimed if the owner has up-to-date insurance, registration and road tax, along with a letter endorsed by the owner&#8217;s battalion commander and the provost marshal. But the owner still owes MCCS for the tow to the impound yard, which can range from $95 to more than $200, he said.

Some people are able to circumvent the system either because their administration sections don&#8217;t verify that they checked out with his office, or the individual forged the checkout sheet, said Hammonds. But subsequent commands may be contacted for servicemembers who&#8217;ve left the island.

In addition, Bergen said, military members can be punished under the Uniformed Code of Military Justice if their command decides to do so.

According to the U.S. Marines in Japan Web site, all government personnel who abandon a vehicle more than 45 days will receive a pay deduction of $350, not including towing charges. Those who&#8217;ve left the service, and civilians as well, may be tracked through the Internal Revenue Service.

Toward preventing the problem of abandoned vehicles, the Joint Vehicle Registration Office requires servicemembers to check out before leaving the island, Hammonds said.

He said individuals who can&#8217;t sell a vehicle before leaving may give 90-day limited powers of attorney to others to sell the vehicles for them. In addition, owners must sign letters saying they are aware that even though they&#8217;re giving someone else the ability to sell the vehicle, they remain ultimately responsible for it.

Bergen recalled the individual who said in an e-mail that the servicemember had given a friend a power of attorney when leaving the island 2&#189; years ago. &#8220;They don&#8217;t realize that they&#8217;re still responsible even though they gave the POA,&#8221; Bergen said.

Bergen and Hammonds said they&#8217;re surprised people abandon vehicles when junking a car is so inexpensive. Hammonds said junking at most it would cost $90 to $100 &#8212; quite the savings, he said, compared to the $300 to $400 individuals who abandon their vehicles face.

Bergen said he could tell when the heavy moving season began.

&#8220;As soon as it hit the middle of June it was like &#8216;Bam!&#8217; MCCS drivers started bringing in abandoned vehicles,&#8221; Bergen said. He said the most abandoned vehicle slips he has seen come in on any one day is 35 from the Camp Foster PMO. Six hundred vehicles come into the lot each year, he said, but that includes those involved in accidents.

All abandoned vehicles must be kept for 45 days, he said. If unclaimed, the vehicle is turned over to MCCS. Vehicles can&#8217;t be sold outright whatever their condition but are sold piece by piece to used-parts bargain hunters.