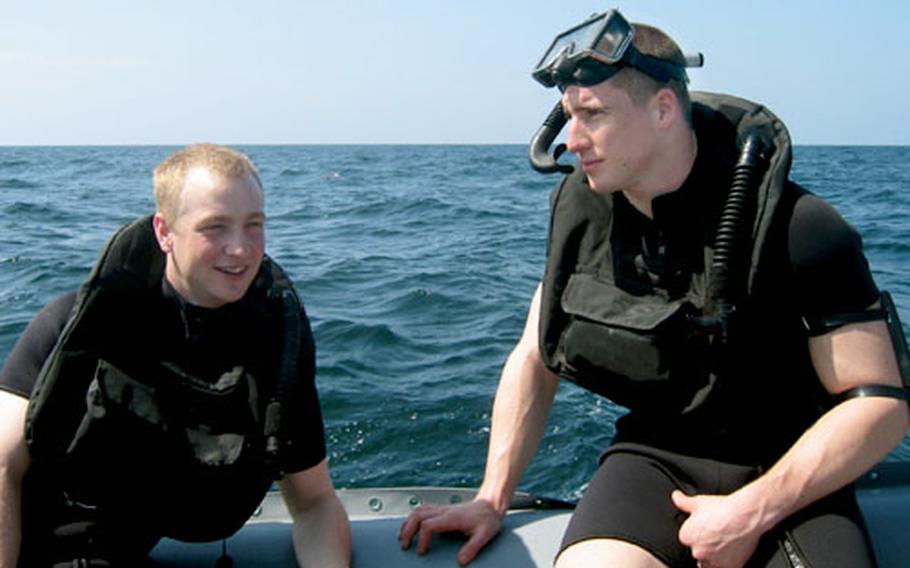 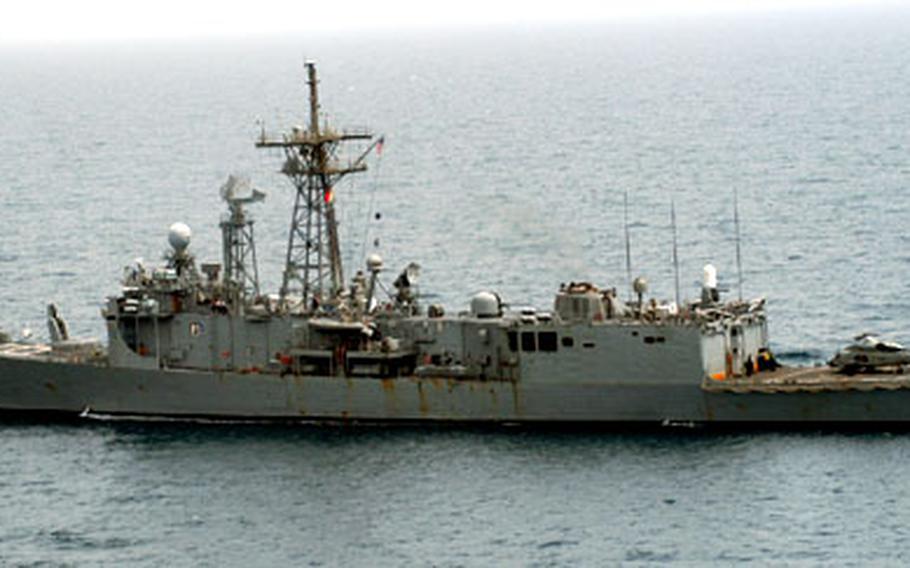 ABOARD THE USS GARY &#8212; Half-blinded by sea spray, the U.S. sailors yelled and gestured for the Iraqi fishermen to jump off their sinking ship.

Fifteen-foot waves tossed the sailors around and sucked their inflatable boat toward the listing, spinning trawler.

The Gary, a guided missile frigate based in Yokosuka, Japan, was 20 miles from the troubled, 90-foot trawler Kaptain Mohamad in the southern Persian Gulf.

Rain, driven by a 30-knot howling wind with even higher gusts, made it too dangerous for the helicopter to hover and hoist up the Iraqis. Dua decided to launch a 21-foot-long inflatable boat, also known as an RHIB.

&#8220;The realization I was telling six sailors to risk their lives,&#8221; he said. The scene reminded him of a Coast Guard commercial.

As the boat was being lowered, a wave rose up and drenched the sailors.

After one failed attempt, the engine started, and the sailors reached the trawler in 30 minutes.

The helicopter and the Gary trained spotlights on the trawler and the eight fishermen, who were clad in dark-green life vests with no reflective tape.

One fisherman climbed out on a crane over the boat&#8217;s edge, clinging to it like he was sliding down a ladder. The inflatable boat slipped 200 feet from the ship a few times.

After five minutes&#8217; hesitation, the man threw himself off the crane, twisting in midair. He landed a few feet from the life ring, grabbed it and the rescue swimmers reeled him in.

Four more made the leap within 20 minutes before a large wave capsized the Iraqis&#8217; boat, with three fishermen still on board.

The wave had actually washed the fishermen away from the trawler. After about 10 more minutes, all were in the inflatable boat and there was a brief period of jubilation. One of the Iraqis fell on Stern.

&#8220;He started kissing me. He put his whole mouth inside my mouth,&#8221; said Petty Officer 3rd Class Chris Stern, 20, a turbine mechanic and rescue swimmer from Ukiah, Calif.

Now crewmembers and fishermen had to get back to the Gary.

Blue eventually brought the boat up alongside the frigate as 15-foot waves slammed over the deck.

As the boat reached the top of a swell, a fisherman grabbed onto a rope ladder attached to the frigate. Then the boat dropped, leaving the man dangling 10 feet above it.

Seconds later, the ladder slats piled up into the boat as a wave raised it, and another man grabbed hold of the ladder. Seven of the eight fishermen climbed up the ladder. The oldest fisherman stayed in the boat.

The sailors attached an 80-pound metal hook to the boat and were raised to the Gary. Once they were all on deck, everyone started hugging and cheering. They were all safe, and no one was injured.

The Iraqis stayed on the ship for four days. They eventually boarded another vessel that was to return them to Iraq.

But Blue was shy in talking about his role. He didn&#8217;t even tell his mother what he did. He just told her to watch the news: The Gary crew had saved some fishermen.