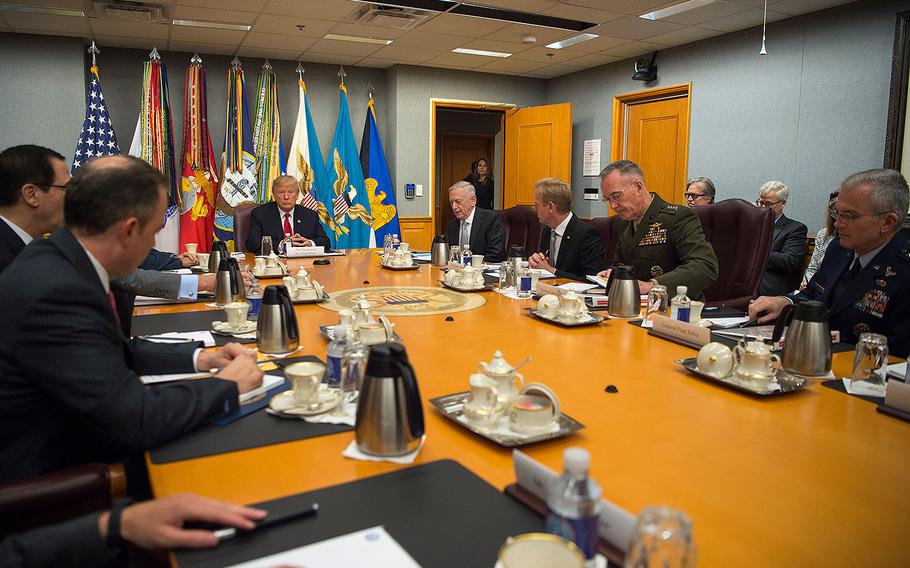 President Donald Trump with members of the National Security Council before a meeting at the Pentagon on July 20, 2017. (Amber I. Smith/U.S. Army)

President Donald Trump with members of the National Security Council before a meeting at the Pentagon on July 20, 2017. (Amber I. Smith/U.S. Army) President Donald Trump speaks to Defense Secretary Jim Mattis before a meeting with the National Security Council at the Pentagon on July 20, 2017. (Amber I. Smith/U.S. Army)

WASHINGTON — President Donald Trump indicated Thursday that White House and Pentagon officials have yet to complete their review of the military strategy to break the stalemate in the nearly 16-year-old war in Afghanistan.

“We’ll see,” Trump responded when asked whether he would deploy additional troops to the country where Americans have been fighting since a month after the Sept. 11, 2001 terrorist attacks.

For nearly six months, the Pentagon and Trump’s National Security Council have been discussing a plan to bolster the Afghan government in its fight with the resurgent Taliban. The plan is expected to include an increase of 3,000 to 5,000 American troops to the roughly 8,400 already serving there, multiple defense officials have said.

Trump visited the Pentagon on Thursday morning for a meeting with top defense and administration officials and appeared more keen on discussing the ongoing operations against Islamic State in Iraq and Syria.

White said the Afghanistan strategy and the anti-ISIS campaign were also discussed but not at length.

The meeting “was not really pointed or meaty,” she said. “They really talked about where we are, where we’re going … it was really an around-the-world conversation.”

No decisions were reached on the Afghanistan strategy or future troop deployments during the roughly two-hour meeting, White said. She added no decision was expected this week.

Trump has rarely commented publicly on Afghanistan, the longest war in U.S. history, but this week he did while meeting with servicemembers who have served there.

Trump’s visit to the Pentagon followed a full meeting Wednesday of his National Security Council at the White House to discuss the Afghanistan strategy, which officials have said will include a whole-of-government approach to stabilizing the country, not just a boost in troops. It is also expected to grant U.S. troops additional authorities to assist Afghan forces against the Taliban from the front lines, Mattis has said.

Trump has already granted Mattis the authority to send some additional troops to Afghanistan, the Pentagon announced last month. However, the defense secretary has delayed sending more troops to the war until the president has signed off on a full strategy, defense officials have said.