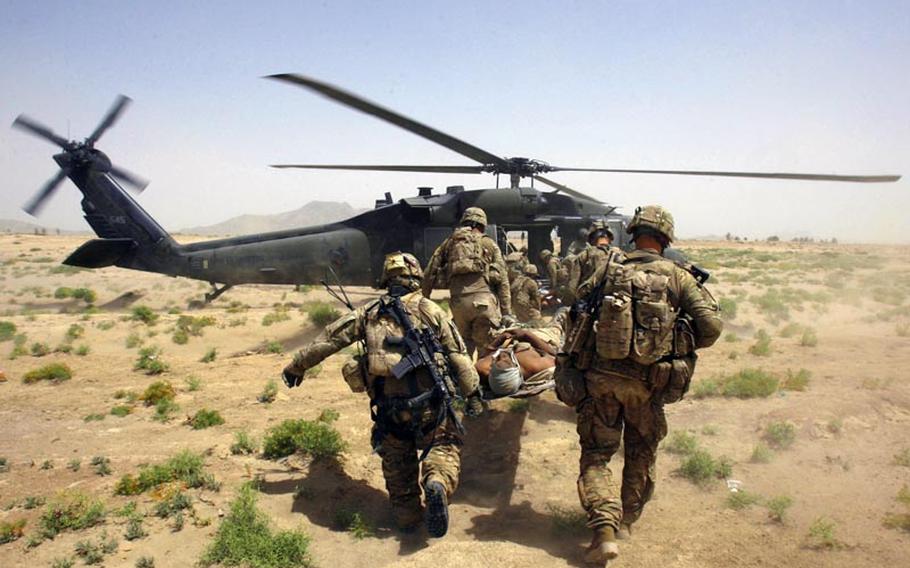 Buy Photo
U.S. troops carry a wounded soldier, injured by an improvised explosive device in Afghanistan, to a helicopter on June, 15, 2011. (Stars and Stripes)

WASHINGTON — No decision was made Thursday at a meeting of top Pentagon officials to discuss eliminating imminent danger pay in areas military leaders suspect may no longer be hazardous enough to warrant the extra money, defense officials said.

Lt. Cmdr. Nate Christensen, a Pentagon spokesman, said officials are taking more time to study a series of recommendations about cutting pay in various areas, saying he couldn’t speculate on possible changes before they are finalized.

There’s no timetable for the release of a final decision, he said.

Security reviews started in 2011 to examine the possibility of eliminating the payments of up to $225 a month for troops serving in 18 countries and 5 waterways, a change that could save the Pentagon up to $120 million yearly.

The changes could affect up to 56,000 troops who live in, sail through or fly over designated danger zones, including places such as Kuwait and Bahrain, headquarters of the Navy’s 5th Fleet.

An online post on Friday offered a reminder that even Middle Eastern countries seen as safe for Americans still hold risk.

Naval Support Activity Bahrain noted on its Facebook page that the country has experienced recent IED blasts and threats, and gave tips for spotting concealed explosives. Although no attacks have targeted Americans, base activities have been disrupted in recent months by apparent bomb hoaxes.

News of the deliberations drew a range of reactions from those serving in or connected to the military. Assignments safe enough for families to accompany troops should not merit danger pay, some said. But an Army Special Forces major told the Fayetteville Observer that the deliberations are “a slap in the face.”

There’s no consideration of eliminating danger pay in countries where troops are fighting or face hostile conditions, officials say.

Hendrick Simoes contributed to this report.