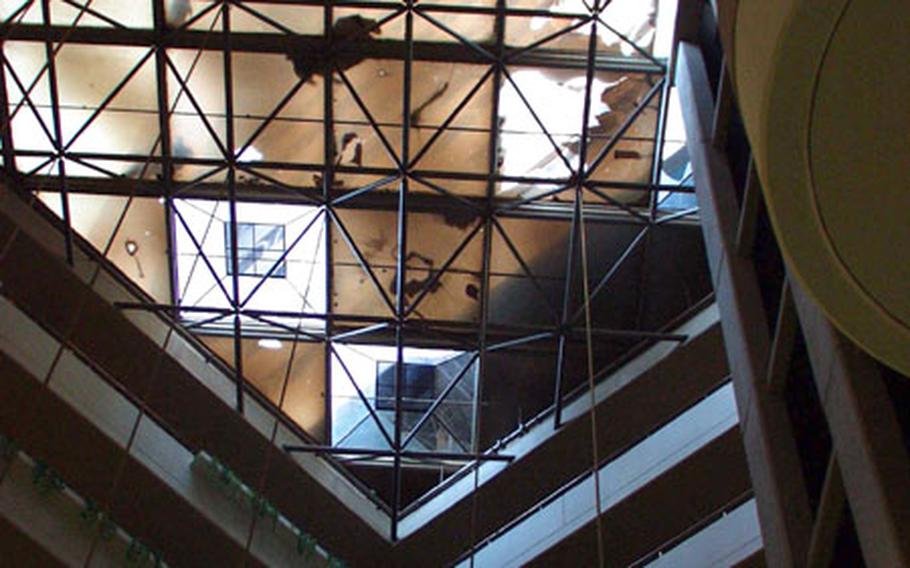 A damaged skylight inside the reception area of the Ishtar Sheraton Hotel in Baghdad. At least two missiles or other weapons slammed into the hotel on Christmas Eve and early Christmas morning. (Ward Sanderson / S&S)

A damaged skylight inside the reception area of the Ishtar Sheraton Hotel in Baghdad. At least two missiles or other weapons slammed into the hotel on Christmas Eve and early Christmas morning. (Ward Sanderson / S&S) 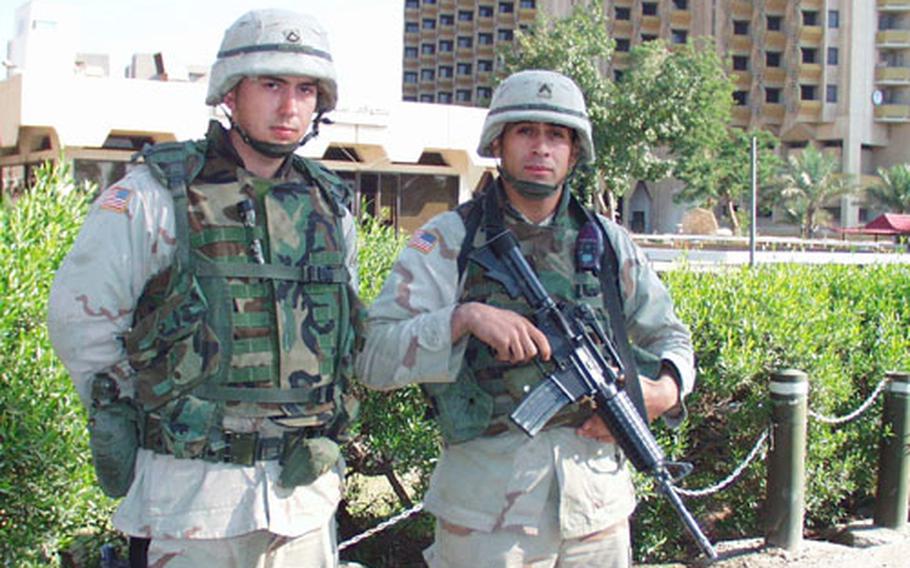 Pfc. Frederick Young, left, and Sgt. Nelson Melendez were on the scene when a missile, rocket-propelled grenade or other weapon struck the Ishtar Sheraton Hotel in Baghdad early Thursday. "What a way to wake up," Melendez said. "Merry Christmas." (Ward Sanderson / S&S) 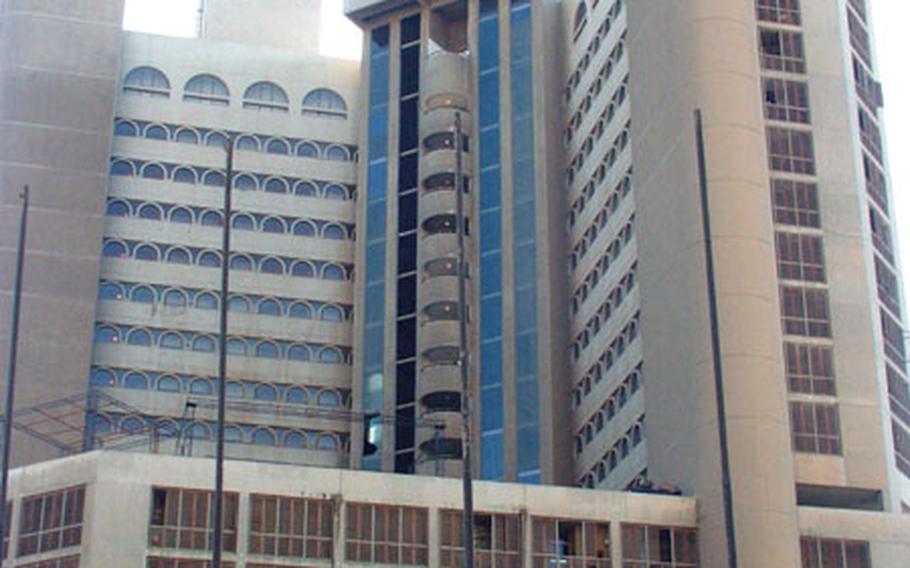 The Ishtar Sheraton Hotel in Baghdad on Thursday morning, following Christmas Eve and Christmas morning attacks during which the hotel was struck by missiles or other weapons. (Ward Sanderson / S&S)

BAGHDAD, Iraq &#8212; Loud blasts shook Baghdad after more than a dozen missiles or other weapons slammed into a hotel used by military contractors and reporters, a U.S. military base, embassies and other buildings over the Christmas holiday.

No one was killed in the attacks.

Late Thursday, several explosions were heard in central Baghdad, and sirens sounded in the Green Zone, a barricaded area that houses the headquarters of the U.S.-led coalition governing Iraq. A military spokesman said he had no immediate information.

The first of the explosives slammed into the Ishtar Sheraton Hotel between 7:30 and 8 p.m. on Wednesday evening. A series of other concussions shook the area early Christmas morning.

&#8220;I heard a squeal from a round coming in, and it sounds like a bottle rocket,&#8221; said Sgt. Nelson Melendez, a 1st Armored Division soldier on morning guard duty in front of the Sheraton and Palestine hotels. &#8220;You ever see what a volcano looks like when it erupts?&#8221;

The morning strikes sent sparks flying, Melendez said. He and his soldiers hit the ground. He said that guerillas fired at the hotel at least three times in the morning, striking it at least once.

The first blast struck an upper floor of the hotel. According to hotel staff, the morning strike slammed into the offices of military contracting company Kellogg, Brown & Root, a subsidiary of Halliburton. A security guard there would not allow reporters to enter for questions.

One part of the hotel lobby was glinting with shattered glass. A bellhop was injured by falling glass in the initial attack, according to Sami Abdullah, sales manger for the Sheraton, who was setting up a Christmas Eve party during the first attack.

Hotel staff and other witnesses heard automatic weapons fire after the attacks. However, Sgt. Melendez said his soldiers did not fire, though he could not rule out that others did not.

U.S. soldiers investigating the area found leaflets warning Iraqis to stay home. The leaflets warned U.S. forces to leave the country and Iraqi police to stop working with them.

A few explosives struck near the Republican Palace and other buildings used by U.S. forces here. The Iranian and Turkish embassies were hit, but not severely damaged.

Another weapon hit an office building behind the German Embassy, destroying an empty room. A mortar shell struck a police station in southern Baghdad, but caused no injuries,

Attackers also struck Baghdad&#8217;s Rasheed and Rafidain banks, blowing holes in the buildings, but according to police no money was stolen.

Another unexploded rocket lodged in a nearby street, according to security forces that sealed off the road with a U.S. tank. Two roadside bombs exploded on Palestine Street, a shopping area often passed by U.S. military convoys. Two Iraqi police officers were wounded.

At a Wednesday news conference, Brig. Gen. Mark Kimmitt, deputy director of operations here, announced that three American troops died when a bomb struck a military convoy north of Baghdad near Samarra. A soldier from the 1st Armored Division was also killed elsewhere in the city that same day when a bomb exploded during a raid.

Late Tuesday, early Wednesday and again Thursday, American aircraft and even artillery fire could be heard across the Baghdad area in an anti-guerilla sweep dubbed Operation Iron Grip. The military announced that Air Force fighters had joined forces of the 1st Armored Division in the fighting. Artillery fire destroyed three sites early Wednesday, the military announced during the news conference.

The coalition has also arrested dozens of suspected guerillas.

&#8220;The targets that were attacked last night were mortar firing points, and it&#8217;s my understanding that three sites were attacked,&#8221; he said. Similar sounds were heard Wednesday evening and early Thursday night.