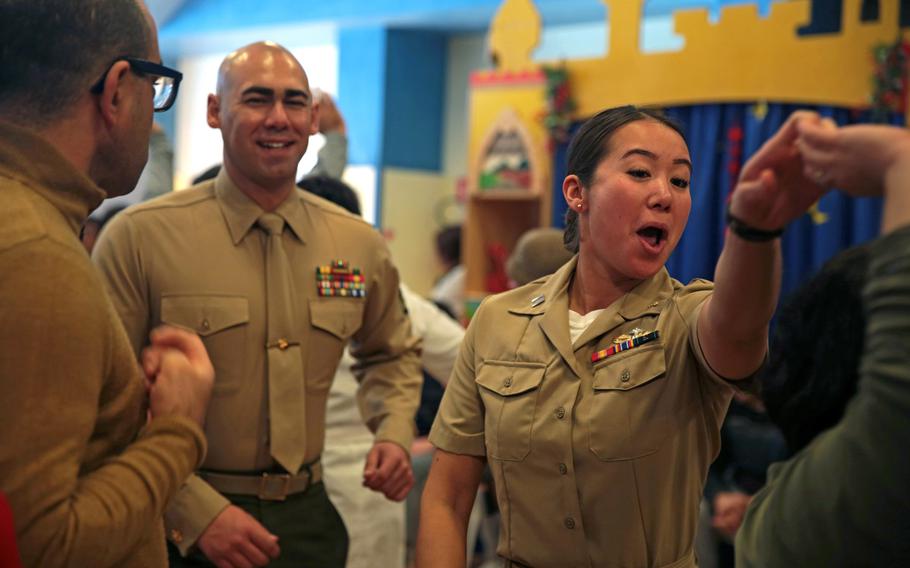 A Marine and a sailor dance with students during a Christmas party at a school in Acireale, Italy, Dec. 11, 2018. An Italian decree states that people are not allowed to dance in public through Sept. 7, 2020 due to coronavirus concerns. U.S. bases in the country are complying with the rule. (Bethanie Ryan/U.S. Marine Corps)

Hed: No dancing allowed for US service members based in Italy amid countrywide health ban

U.S. military bases in Italy ordered service members to comply with a ban on dancing in public after the country instituted the restriction following a spike in confirmed coronavirus cases.

The Italian decree also requires masks from 6 p.m. to 6 a.m. in public outdoor areas where gatherings could occur, including parks, public squares, waterfront areas and streets.

Previously issued directives said face masks were only necessary outside when it wasn&#8217;t possible to maintain proper social distancing. People are still required to wear masks indoors throughout the day at public places and while using public transport. The new rules will remain in effect through at least Sept. 7, the decree said.

On Thursday, the U.S. Navy base in Naples reiterated that the restrictions apply to its personnel, stating that dancing both indoors and outside is prohibited &#8220;in discos, ballrooms, beaches, hotels, or other public areas,&#8221; in a Facebook post signed by installation commander Capt. Jim Stewart.

Italy reported 845 new coronavirus cases in 24 hours, the Health Ministry said Thursday, the most since Italy eased strict lockdown measures in May.

The country was among the world&#8217;s worst-hit by late March, when it recorded more than 6,000 new daily cases at its peak. But by late June, daily case figures had dropped to between 125 and 200 per day, according to Health Ministry figures.