No clear winner on US base issues following Okinawa elections 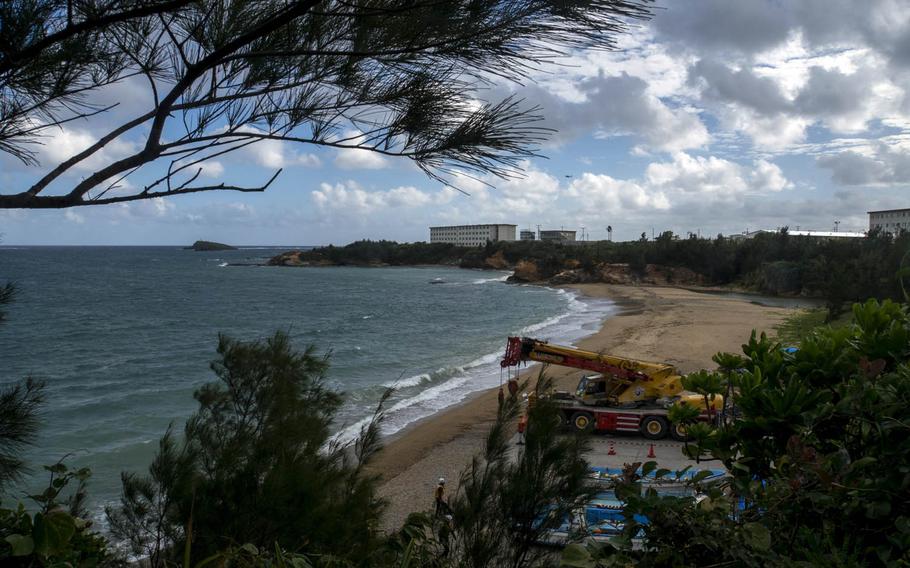 Buy Photo
The Okinawa Defense Bureau is placing 228 concrete blocks at the bottom of Oura Bay off Camp Schwab, the first major step in building a runway that will facilitate the controversial relocation of Marine forces within the island prefecture. (Jessica Bidwell/Stars and Stripes)

CAMP FOSTER, Okinawa — There was no clear winner as anti- and pro-U.S. military factions squared off in recent local elections on Okinawa.

Seats in the local assembly were up for grabs Sunday in 25 cities, towns and villages, including Nago, site of the proposed Marine Corps Air Station Futenma relocation facility. Voting there was largely seen as a referendum on the plan to build a runway into Oura Bay at Camp Schwab that would one day facilitate the closure of Futenma and the relocation of Marine air assets on the island.

Thirteen of Nago’s 26 seats were won by supporters of Mayor Taketoyo Toguchi, an independent backed by Prime Minister Shinzo Abe’s Liberal Democratic Party. The others went to opposition candidates.

“It means a lot that our administration kept the majority seats,” Toguchi told reporters Monday, according to Japan’s Yomiuri newspaper.

While it may seem like a victory for Toguchi, the wild card could be two victorious Komeito-backed candidates, according to The Japan Times. Komeito — a political party founded by the Soka Gakkai religious movement — has expressed support for Toguchi but opposes the relocation of air operations to Henoko.

While Toguchi has largely refrained from taking a position on the relocation in favor of focusing on social issues, he is widely seen as being friendly to the U.S. military.

Sakima was there to cheer and support Toguchi’s administration party candidates during the election, the Okinawa Times newspaper reported.

Protest letter The elections weren’t the only relocation-related news in the past week. More than 130 scholars, artists and activists from around the world signed an open letter addressed to Abe, President Donald Trump and Okinawa’s two acting governors — Kiichiro Jahana and Moritake Tomikawa — seeking to cancel the Futenma relocation and demilitarize the Ryukyu islands.

The letter — dated Sept. 7 and sent on behalf of the Peace Philosophy Centre in Vancouver — was signed by Oscar-winning filmmaker Oliver Stone; historian and social critic Noam Chomsky; Daniel Ellsberg, the whistle-blower behind the Pentagon Papers; and former American intelligence officials, diplomats and a Nobel laureate.

The undersigned called for rethinking Okinawa’s role in the region, transforming a “fortress” into the center of a demilitarized community built around the East China Sea.