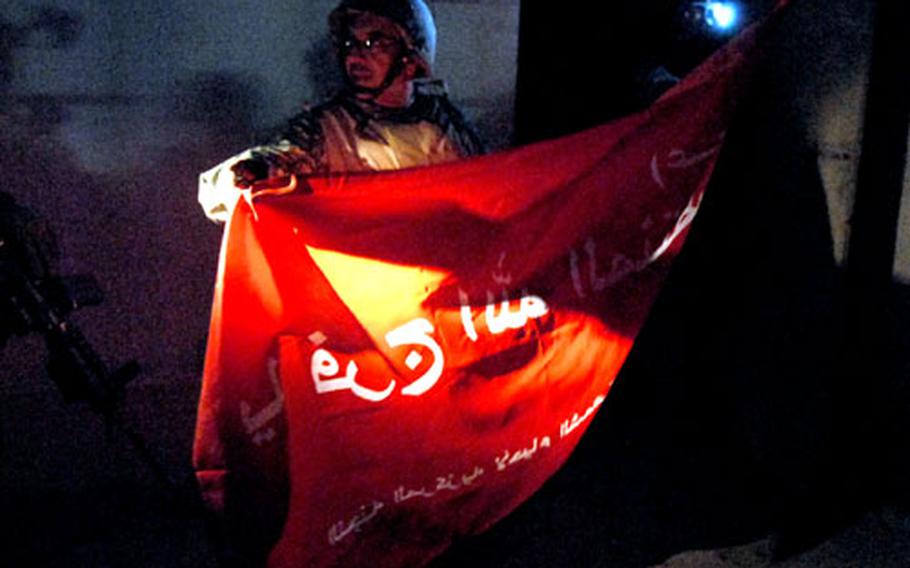 John Issa, an interpreter who’s an American citizen originally from Lebanon, translates words on a Shiite flag found Monday night in the Hurriyah area of Baghdad in a home once used as a kidnappers’ hide-out. The flag reads, “Muqtada Sadr, savior of god,” a reference to the Shiite cleric who heads the Mahdi Army. Al-Sadr has asked his followers to march from Baghdad to Najaf on Wednesday. (James Warden / S&S)

BAGHDAD &#8212; More fighting took place in Baghdad over the weekend, and American commanders will be watching the situation closely Wednesday when Shiite cleric Muqtada al-Sadr&#8217;s Mahdi Army was to take to the streets for a planned million-man march on Najaf.

But as Iraqis await these developments, it is still unclear who benefitted from the heavy fighting that exploded at the end of March, an event soldiers have dubbed &#8220;March Madness.&#8221;

American and Iraqi military commanders bill the firefights as a clear victory for coalition forces. But many analysts think the fighting showed cracks in Prime Minister Nouri al-Maliki&#8217;s government. The area&#8217;s swift return to normalcy after al-Sadr ordered his fighters to withdraw only reinforced the observation that his Mahdi Army still holds considerable sway over the country.

The uneven success from sector to sector and unit to unit doesn&#8217;t help clarify the situation.

Where the Americans engaged the insurgents directly, they usually prevailed &#8212; or at least chased the attackers away from the checkpoints and forced them into hit-and-run tactics. Helicopters pummeled attackers from the skies. Even the mere sound of Bradleys and tanks could be enough to halt an attack.

First Lt. Logan Dick, platoon leader with Troop B, 1st Squadron, 75th Cavalry Regiment, described a typical firefight. The attackers stood in Shula behind a river and engaged Dick&#8217;s soldiers in Ghazaliya. This forced a long-distance fight that benefitted the Americans.

The attackers used small children to recon the American&#8217;s positions, but the soldiers were still able to identify the attackers and pick them apart with very little risk to themselves. That didn&#8217;t change, even when the Americans had to roll through narrow urban areas. Their lone casualty during the fighting was a concussion from a roadside bomb.

Capt. Rob Gillespie, Troop B company commander, elaborated that Iraqi leaders are upset because the Ghazaliya Iraqi army battalion performed &#8220;less well&#8221; than other battalions did. Some officers were removed from their commands. Worse, some company commanders were court-martialed for agreeing not to interfere with the insurgents in exchange for a promise that they wouldn&#8217;t be attacked.

Col. Ehssan Ali Ibrahim, the Iraqi National Police battalion commander in Shurta, conceded that many of his troops gave up as well. But the rest fought hard, and despite heavy casualties, held on to their checkpoints &#8212; albeit with the Americans&#8217; help.

&#8220;Sadr ordered the people to stop fighting in the street because he saw there was a big force going to finish him and finish his followers,&#8221; Ibrahim concluded.

Sgt. Jasim Hamadi, an Iraqi army checkpoint commander in the area, said residents have since been generous coming forward with tips to help stop insurgents and Shiite gangs who are extorting the neighborhood.

Iraqis, even those in heavily Shiite areas, were more guarded when asked through an interpreter to assess the fallout. All said government forces are in a better position after the fighting. Most denied any knowledge of the Mahdi Army and wouldn&#8217;t even guess at the strength of its position.

Paradoxically, many people said both sides came out ahead when asked specifically about the Mahdi Army.

&#8220;The Iraqi Army is stronger. The Mahdi Army got hit, got beat up,&#8221; Iraqi Army Lt. Faras Kaldum Mohammad said at a checkpoint in the Ghazaliya area.

Yet the eventual outcome may rest more on strategic political decisions.

Iraqi lawmakers are working on a bill to ban parties from participating in the government if they have ties to militias.

Some fear the law could break the uneasy truce that al-Sadr declared with coalition forces last year.

Meanwhile, Al-Sadr threatened Tuesday to lift a seven- month freeze on his Mahdi Army militia if the Iraqi government does not halt attacks on his followers or set a timetable for a U.S. withdrawal.

Analysts have cited the truce as one reason for the drop in violence.

Since that time, American leaders have been careful to distinguish between the Mahdi Army and rogue elements dubbed &#8220;special groups&#8221; who they say continued to attack coalition forces.

Last month&#8217;s violence inadvertently reinforced that point when Shiite leaders justified the attacks because of the Americans&#8217; targeted attacks on suspected militants.

Yet soldiers point out that most parties have ties to militias &#8212; a frequent criticism, even if the competing parties themselves deny it.

In the end, Iraq is a country fractured not only between Sunnis and Shiites, but between a legion of militias within those groups, each trying to carve out a piece of the country for itself.