Seaman Brandon Hardeman, playing quarterback for Da&#39; Throwbacks from the USS Fort McHenry, tries to fire a pass downfield before his flag is snagged by a defender from the Hitmen of the Sasebo Naval Base Security Department during the southern Japan base&#39;s MWR Snow Bowl Saturday afternoon at Nimitz Park. (Greg Tyler / S&S)

Seaman Brandon Hardeman, playing quarterback for Da&#39; Throwbacks from the USS Fort McHenry, tries to fire a pass downfield before his flag is snagged by a defender from the Hitmen of the Sasebo Naval Base Security Department during the southern Japan base&#39;s MWR Snow Bowl Saturday afternoon at Nimitz Park. (Greg Tyler / S&S) 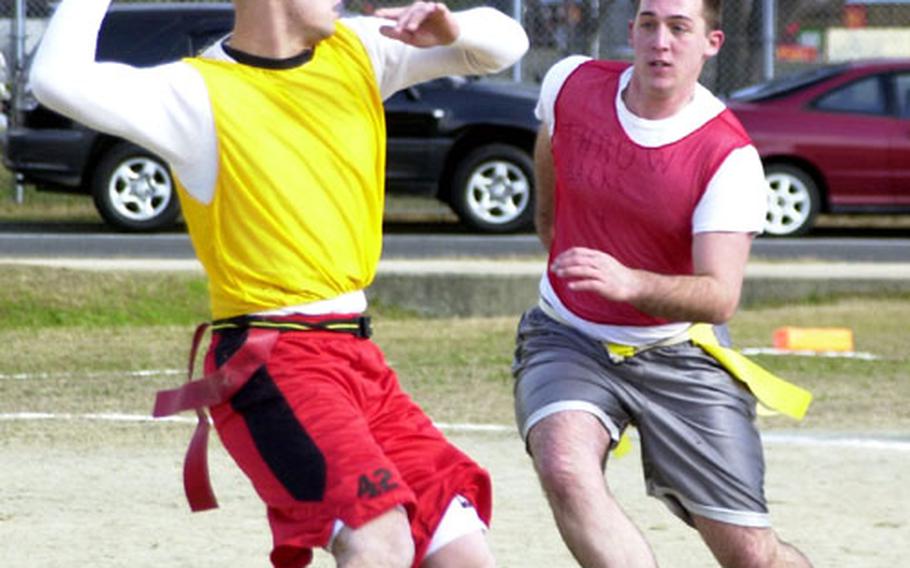 Dustin Kentzel, a quarterback for the Hitmen of Sasebo Naval Base&#39;s Security Department, tried to throw an accurate pass to his teammate downfield despite pressure coming straight at him from one of the pass rushers from Da&#39; Throwbacks, the USS Fort McHenry team, during the flag football Snow Bowl Saturday afternoon at Nimitz Park. (Greg Tyler / S&S) Once a player for the Hitmen, Petty Officer 2nd Class Phillip Azevedo, on crutches at left, can only watch as his Sasebo Naval Base Security Department teammates play hard in a winning effort against Da&#39; Throwbacks from the USS Fort McHenry. He chats with his friend Petty Officer 2nd Class Ken Utley, a receiver on another of the top teams, the Dragons, as he waited for his game to begin later Saturday afternoon at the Snow Bowl flag football championship tournament at Nimitz Park. (Greg Tyler / S&S)

SASEBO NAVAL BASE, Japan &#8212; While many love the weekend after Christmas for no other reason than settling into their recliners, propping up their feet, munching on turkey sandwiches and watching some pro and college games on TV, a group of sailors here headed outside to seek their own gridiron glory.

The Sasebo Naval Base Morale, Welfare and Recreation Department&#8217;s annual Snow Bowl, the base&#8217;s flag football league championship tournament, is a one-day, winner-take-all battle, the culmination of a three-month season.

The tournament nearly matched its moniker on Friday night, when Sasebo had periods of light snow flurries and sleet. However, by Saturday&#8217;s opening kickoff, the clouds were gone and conditions were crisp, with bright blue skies and occasional wispy clouds, temperatures in the 40s and enough wind to make it seem even colder.

&#8220;It&#8217;s the fun of the game, and we have nothing else to do because it&#8217;s the weekend after Christmas,&#8221; said master-at-arms Seaman Rubbie Johnson, wrapped up to her earlobes in a thick University of North Carolina sports jacket, while cheering on the Hitmen, a team made up of security department personnel.

When the regular season ended, the base newspaper&#8217;s &#8220;power rankings&#8221; listed Harpers Ferry as the team to beat, followed by the Crazy Rhinos, Dragons and Hitmen. But rankings mean little to the players, with each team having a shot in the Snow Bowl.

&#8220;This is great because we come out here today, and you just play your heart out,&#8221; said Seaman Darrin Russ of the Crazy Rhinos. &#8220;We have eight really well- planned, competitive teams. We&#8217;ve been playing each other for three months, so we all know each other quite well.

The Crazy Rhinos have finished second each of the past two seasons.