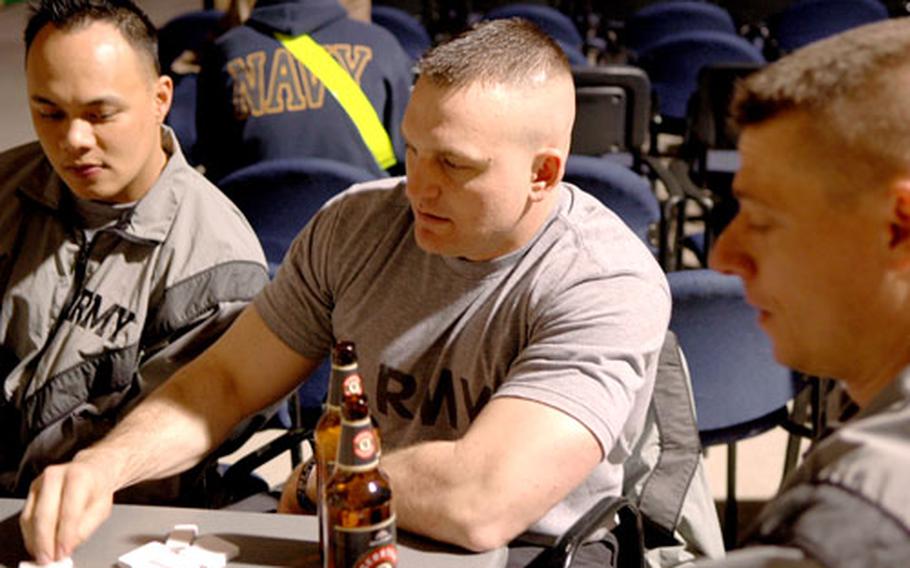 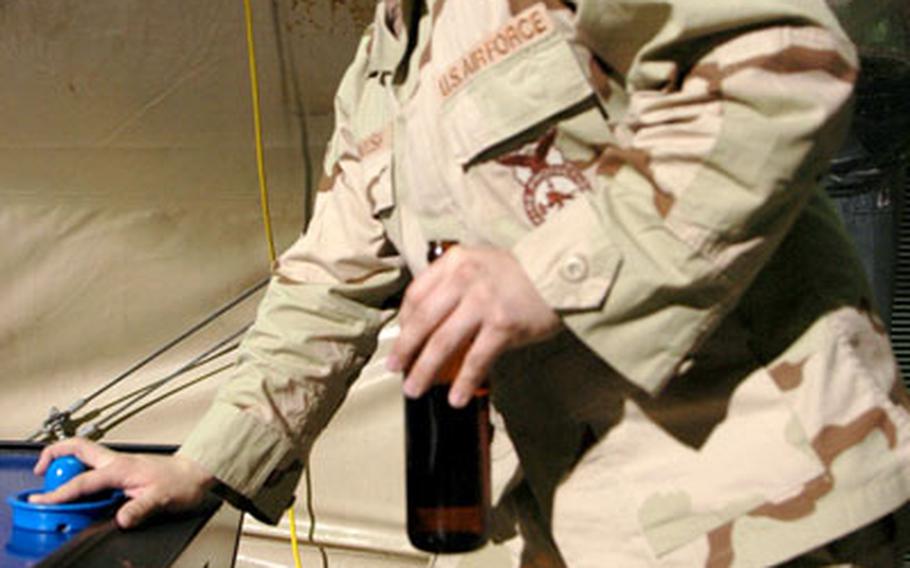 Airman 1st Class Andrew McIntosh, 21, enjoys a beer while lamenting that some of his Army brethren can&#39;t do the same. (Anita Powell / S&S)

MANAS AIR BASE, Kyrgyzstan &#8212; Call it the Bar at the End of the Universe.

Pete&#8217;s Place, the tent/bar at Manas Air Base, is the last watering hole where troops headed downrange can get beer (but only two per night, please) before hitting Afghanistan. It&#8217;s also the first place that those going home can have a drink.

Pete&#8217;s, which on most nights hosts a healthy crowd of airmen who are stationed on the base, seems like it would be a hopping venue for soldiers, sailors and Marines headed to and from war to belly up to the bar, trade war stories and soothe predeployment jitters with $2 beers.

But many soldiers passing through Manas on their way into Afghanistan are ordered to adhere to General Order 1, which prohibits, among other things, alcohol consumption.

On a recent evening, the bar was occupied mostly by airmen, as a few soldiers stood by and made small talk over the bar&#8217;s amped-up hip-hop soundtrack.

Army Sgt. 1st Class Jeffrey Bendit, 36, of Fort Eustis, Va., said he also didn&#8217;t mind staying dry throughout his anticipated 10-day stay at the base, as he waited for soldiers with his unit to join him before he returned home.

&#8220;I think most of the people here who are drinking are stationed here at Manas,&#8221; he said, looking around the bar.

The airmen in the bar mostly seemed oblivious to their teetotalling brothers.

Even some Army troops agreed that soldiers headed downrange shouldn&#8217;t be hitting the bar.

&#8220;They deserve a drink before they go do what they do. They deserve a last drink if they want it,&#8221; he said, brandishing a pool cue and a bottle of Kyrgyz beer.

But not all do. Army Spc. Kyle Saltz, 22, of Kennewick, Wash., who had just returned from a year in Afghanistan &#8212; make that &#8220;one year and five days,&#8221; he corrected &#8212; nursed a bottle of water as airmen around him toasted each other with bottles of beer. Saltz was not ordered to refrain from drinking while at Manas.

Saltz may have been an exception: Other soldiers returning from a year in Afghanistan seemed keen to indulge.