Nip and tuck ... sometimes on the military's buck 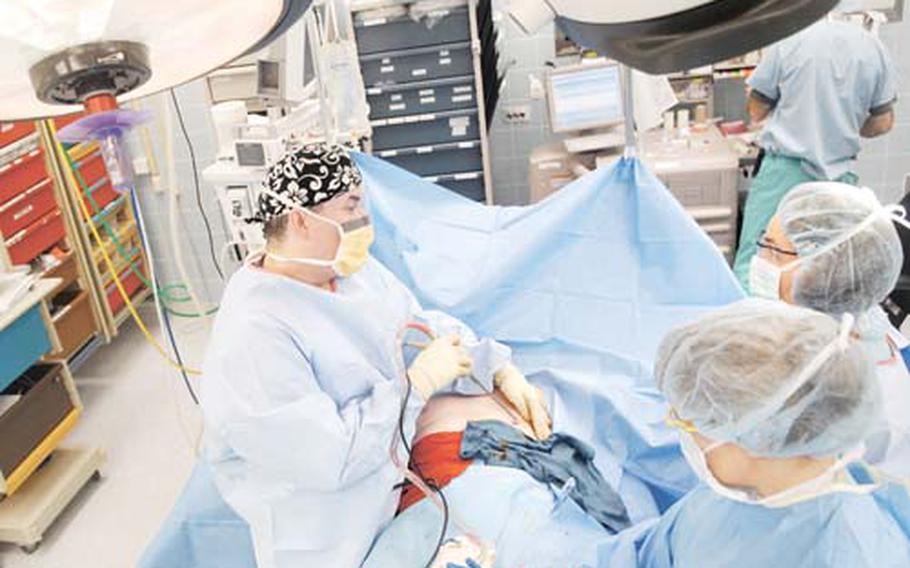 The military is adamant: It does not pay for unnecessary plastic surgery.

But an audit of patient records released by the Pentagon in February shows that&#8217;s not always the case.

"It raises a concern because it&#8217;s not allowed," said Navy Cmdr. James Ellzy, director of clinical quality for military health service at the Pentagon, who oversaw the review.

The military keeps plastic surgeons and reconstructive specialists on its payroll to treat war-mangled troops and others disfigured in accidents or by disease or birth defects.

Because a majority of military doctors don&#8217;t perform those medically necessary surgeries on a consistent basis, to keep their skills sharp they are allowed to perform cosmetic plastic surgery for paying patients.

Plastic surgery deemed cosmetic must be paid by patients out of pocket, similar to medical insurance practices in the civilian world.

However, some servicemembers, dependents and retirees are undergoing purely cosmetic surgery on the military&#8217;s dime, according to the Pentagon audit.

Investigators examined six surgeries commonly considered cosmetic &#8212; though sometimes performed for medical purposes, such as a breast augmentation for a breast cancer survivor &#8212; at 13 military hospitals during 2008 and 2009. They found that 16 percent of the surgeries should have been deemed cosmetic but were not.

They also found that the hospitals could not provide billing documentation for 73 percent of the procedures that were properly categorized as cosmetic, though patients are supposed to pay before the surgery can be scheduled.

Along with the audit, the Pentagon surveyed doctors and interviewed top military medical officials as part of its review of military plastic surgery practices. Citing privacy protections for medical "quality assurance" records, Pentagon officials released only a one-page summary of the review and would not disclose which hospitals were audited, how many doctors were surveyed or how many surgical procedures were conducted at the hospitals.

But prior to 2005, for example, a female servicemember who received a breast augmentation would pay only for the cost of the implants, not for surgical fees and other ancillary costs. The procedure would now cost her more than $7,000.

The 2005 policy was implemented in the wake of media reports in 2004 about troops receiving free cosmetic surgery. But the review also suggests plastic surgeons and other reconstructive specialists are increasingly leaving the military because of the new plastic surgery restrictions.

The Pentagon could not provide statistics for how many surgeries were examined in the audit or rates for plastic surgeries performed militarywide in recent years.

The services&#8217; surgeons general offices were briefed on the audit in January.

"We&#8217;ve taken the lid off," Ellzy said. "The services need to see what they can do to rectify the problem."

Doctors have a great deal of flexibility in determining whether plastic surgery is medically necessary or just cosmetic &#8212; a process almost exclusively controlled by medical insurance companies in the civilian world. Plastic surgery that restores or provides a normal appearance or alleviates symptoms generally qualifies as medically necessary by military standards, according to active-duty doctors interviewed by Stars and Stripes.

Take male breast reduction, for example. Most men seeking the surgery suffer from gynecomastia, a condition sometimes linked to male breast cancer but more often characterized by a hormone imbalance that causes an excessive amount of breast tissue and often comes with tenderness or chafing. The surgery is considered cosmetic in the civilian world and almost never covered by medical insurance.

Not only does Tricare usually cover the procedure, "it&#8217;s very common," said Dr. George Broughton, an Army colonel and chief of plastic surgery at Landstuhl Medical Center who sees two or three men per week seeking help for gynecomastia.

"The No. 1 complaint is that it makes wearing body armor difficult," said Broughton, who in 2008 performed more breast reductions on men &#8212; 36 &#8212; than on women &#8212; 31. He said he rarely operates on combat casualties at Landstuhl because they are often not stable enough for plastic surgery while transitioning through the hospital en route to the United States.

Broughton said he successfully defended gynecomastia surgery as medically necessary last year after hospital administrators contended it should be classified as cosmetic. The debate was resolved in Broughton&#8217;s favor after the Army Surgeon General&#8217;s Office weighed in on the matter, he said.

Tricare has clear guidelines that doctors are supposed to follow for determining and noting when procedures are medically necessary versus cosmetic. But in practice, the distinction can be more complicated.

Ultimately, the decision rests with the physician, said Martin, who typically treats only injured troops.

Reconstructive surgeons stationed elsewhere encounter few if any combat casualties, and they typically do not have enough patients requiring medically necessary surgery to keep their skills and certification current.

Nearly all of the medical officials interviewed by the Pentagon said the 2005 patient payment policy had hurt retention rates for plastic surgeons and others authorized to perform cosmetic surgery, including ear, nose and throat specialists; dermatologists; and oral surgeons.

DOD policy on cosmetic surgery notes that the "wartime mission demands specialists skilled in reconstructive plastic surgery" and is intended to keep those surgeons prepared for reconstructive cases, which often require the same surgical techniques.

A cosmetic eyelid lift, for example, requires many of the same skills needed to repair a facial fracture, said Dr. Kerry Latham, an Air Force major who is a plastic surgeon based at Keesler Air Force Base in Mississippi.

"The more surgeries you do, the better you are, and they&#8217;re all related," said Latham, director of the Athena Program for Plastic and Reconstructive Surgery, which brings plastic surgeons to overseas bases that do not have one on staff.

While doctors can rely on a patient&#8217;s description of pain or other symptoms to classify a plastic surgery as necessary, it&#8217;s not always a guarantee.