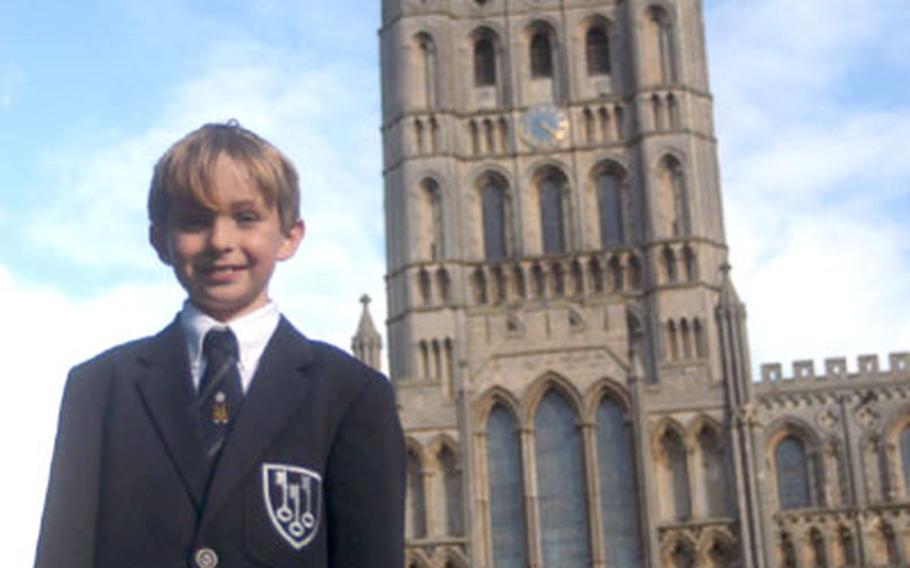 Maxwell Kunkle, 9, is preparing to join the choir at the ancient Ely Cathedral in England. (Ron Jensen / S&S)

Maxwell Kunkle, 9, is preparing to join the choir at the ancient Ely Cathedral in England. (Ron Jensen / S&S) ELY &#8212; The boys choir of Ely Cathedral has been filling the magnificent 1,000-year-old structure with music for hundreds of years.

But never has the choir included an American voice.

Maxwell Kunkle, 9, son of Laura and Taylor Kunkle, will soon add his talent to the cathedral&#8217;s evensong performance.

Maxwell passed an audition and began attending classes in September at The King&#8217;s School, a boarding school in Ely, where he rehearses with the choir and takes music lessons each day before beginning his regular class work.

Trepte, who has been in the job for 16 years, said Maxwell could be singing with the choir by year&#8217;s end.

Maxwell&#8217;s response to that is fairly typical for a 9-year-old.

Laura Kunkle, who works for 3rd Air Force at RAF Mildenhall, said she knew her son had a good singing voice, &#8220;but we never thought much of it.&#8221;

Encouraged by a friend to get him proper training, they found information about The King&#8217;s School and scheduled an audition with Trepte.

Maxwell, who had been attending a British school in Mildenhall, was given academic tests and then spent one night in the Choir House, the 14th-century home for choristers, as part of the admissions procedure.

He passed and now lives at the Choir House from Sunday night until Friday evening, rising before 7 a.m. each day for music practice.

Maxwell said he misses his parents and younger brother, George, during the week, but he has made friends and looks forward to singing with the choir, which he said sounds like angels.

The choir is made up of 22 boys from ages 8 to 13 and performs evensong at the cathedral on Sunday, Monday, Tuesday, Thursday and Friday. It is spoken on Wednesdays.

Evensong is a Christian service of reflection held in the evening.

The Kunkles, who have been in England since 1996, miss Maxwell during the week, but see it as a big step for his development both in music and in life. And, they said, so does their son.

Doors open to others from States

ELY &#8212; Paul Trepte, director of music for Ely Cathedral, encourages American boys to follow in the footsteps of Maxwell Kunkle, who is about to become the first American member in the history of the boys choir.

Maxwell, 9, son of Laura and Taylor Kunkle, who both work at RAF Mildenhall, could be performing evensong with the choir by the end of the year.

Trepte, who wants to build on that bit of history, said: &#8220;What I&#8217;m looking for are boys that are very, very bright. I look into their eyes. I like cheeky boys. Being a chorister is about showing off.

He said choristers have a high success rate in whatever field they enter as adults, having learned at a young age about self-discipline, responsibility and how to deal with pressure.

Information on how to apply for an audition is found at the cathedral Web site at: www.cathedral.ely.anglican.org.