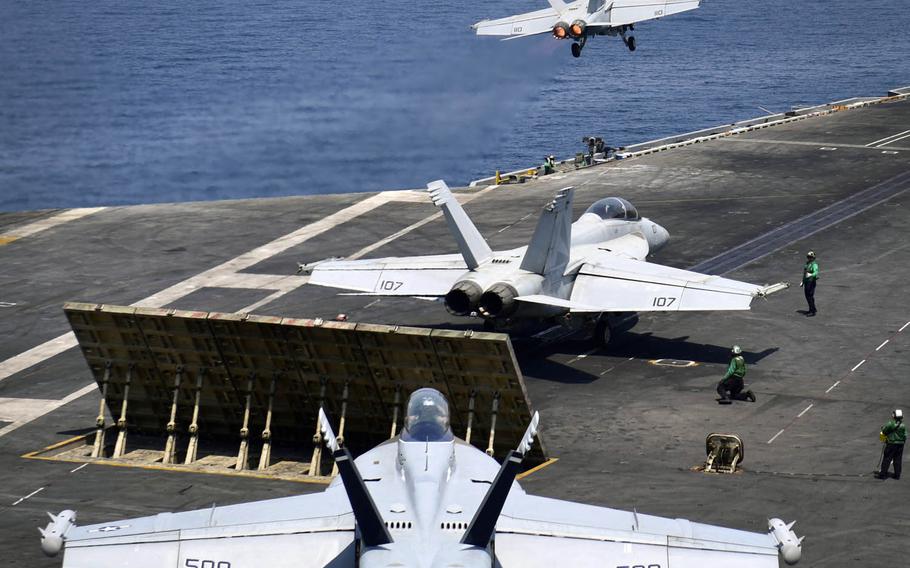 The USS Nimitz officially joined the fight against the Islamic State Monday when it launched its first round of strikes against targets from the Arabian Gulf.

The strikes were conducted by aircraft assigned to the strike group’s Carrier Air Wing 11, a Navy statement said. An F/A-18E Super Hornet assigned to Strike Fighter Squadron 147, known as the Argonauts, was the first aircraft launched for the operations.

The air wing will be at the “tip of the spear” during the anti-ISIS operations, said Rear Adm. Bill Byrne, the strike group’s commander.

“For the Nimitz Strike Group, today is game day,” he said in the statement. “When you hear the roar of the jets today it is for real; it’s game on. Our pilots and aircrew are demonstrating our continued commitment to this region and all of our partner nations.”

The USS Nimitz, one of four strike groups assigned to the Navy’s 3rd Fleet, is replacing the USS George H.W. Bush Strike Group, which conducted strikes against ISIS targets before the Nimitz’s arrival.

The Nimitz arrived in the area about a week and a half ago after participating in Malabar 2017, a joint exercise with Indian and Japanese naval forces that focused on anti-submarine warfare.

Operation Inherent Resolve and Malabar 2017 are among a number of prominent exercises and operations the 3rd Fleet has participated in since the 3rd Fleet Forward initiative began last year. Spearheaded by Pacific Fleet Commander Adm. Scott Swift, the initiative gives the fleet more autonomy when operating outside its operations area.

In addition to anti-ISIS missions, the Nimitz carrier group will conduct “maritime security operations to preserve freedom of navigation,” the Navy statement said.

The group arrives in the region at a time of heighted tensions with Iran, whose Revolutionary Guard said the Nimitz fired a warning shot Friday in an “unprofessional” confrontation with Iranian vessels, the official IRNA news agency reported. The Navy said flares were fired after Iranian vessels were spotted approaching the Nimitz and an accompanying ship at a high rate of speed.

Days earlier, the USS Thunderbolt fired warning shots at an Iranian military vessel that approached the U.S. patrol ship at a high rate of speed, a Navy statement said.

The Nimitz, homeported at Bremerton, Washington, has been deployed since early June.