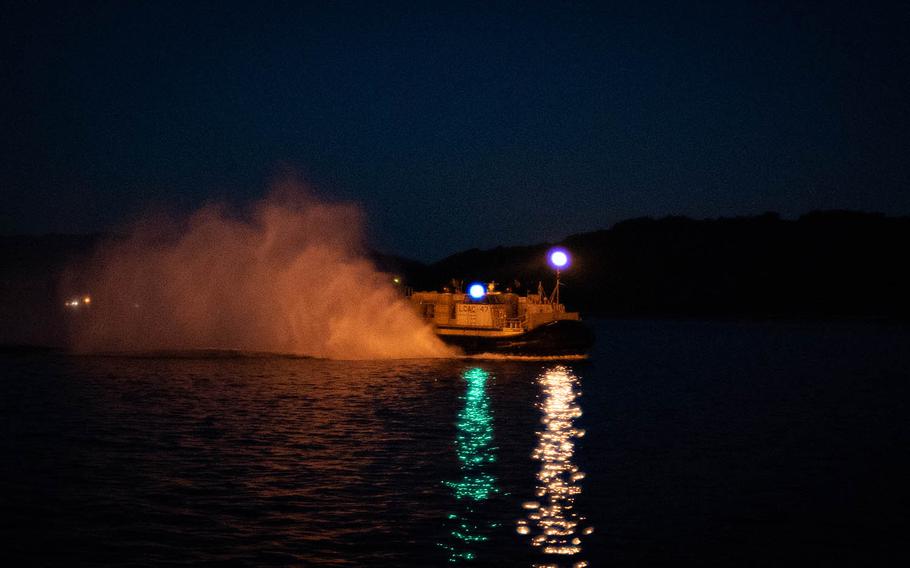 A landing craft air cushion, or LCAC, from Naval Beach Unit 7 returns from a night mission near Sasebo Naval Base, Japan, May 10, 2018. (James Bolinger/Stars and Stripes)

A landing craft air cushion, or LCAC, from Naval Beach Unit 7 returns from a night mission near Sasebo Naval Base, Japan, May 10, 2018. (James Bolinger/Stars and Stripes) 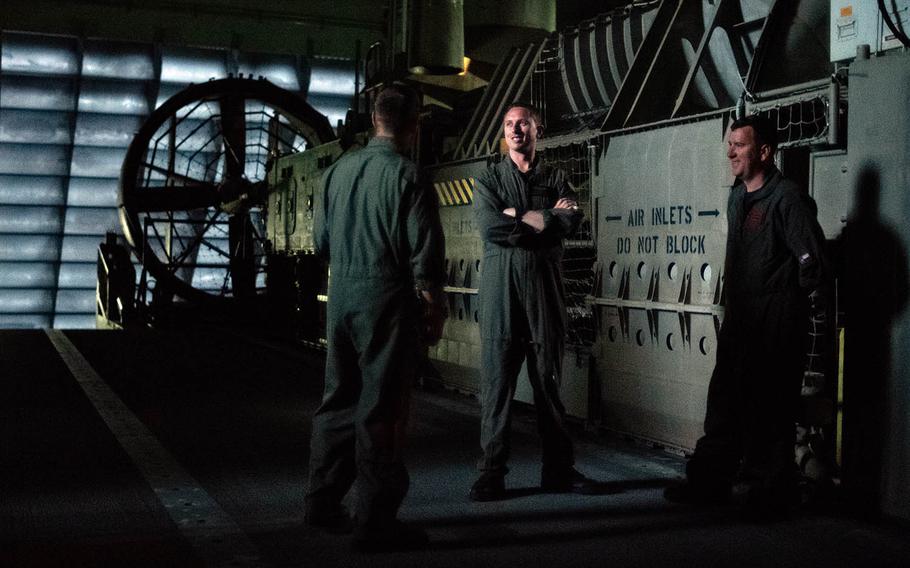 Sailors assigned to Naval Beach Unit 7 talk aboard a hovercraft inside a hangar near Sasebo Naval Base, Japan, May 10, 2018. (James Bolinger/Stars and Stripes) A small facility that houses the hovercraft for Naval Beach Unit 7 is seen near Sasebo Naval Base, Japan, May 10, 2018. (James Bolinger/Stars and Stripes)

The drills, which were done during deployments in the past, are happening in Japanese waters so that crews can get enough “flight hours” to stay proficient, said Cmdr. Bob Jones, the unit’s leader.

However, locals have complained about noise and safety, citing an agreement made with Japan’s Defense Ministry when Saikai agreed to host the hovercraft in 2013. The agreement asks the Navy not to train after dark.

“Night training affects residents’ lives, and it also affects the safety of ships,” a Saikai City official said on May 11.

Saikai residents wrote a letter to the Defense Ministry after the first night-training mission, urging the Navy not to continue the operations, the official said.

But Jones said a daytime mission doesn’t provide the practice that crews need to operate safely in darkness.

“There is a distinct difference between what you see visually when operating during the day and operating at night,” he said.

The Navy sends out notices to let fishermen and residents know when the night operations will happen, he added.

Hovercraft crews give other vessels a wide berth and leave for the missions during daylight, Jones said. After the sun goes down, sailors are equipped with night-vision goggles.

Extra sets of eyes, including the commander’s, watch from behind the driver, engineer and navigator, and the hovercraft travel in pairs so that immediate help is available in an emergency, he said.

Night training happens in the early evening. A May 10 mission returned to port at around 8 p.m.

Recent tests of the noise created by the hovercraft show they are comparable to passing trains, Jones said.

The vessels conduct about 10 nighttime training missions each year, but all take place in the open sea. Landing practice happens in Miyazaki prefecture and can go as late as 8 p.m., but Japanese officials said they weren’t aware of any complaints about those missions.