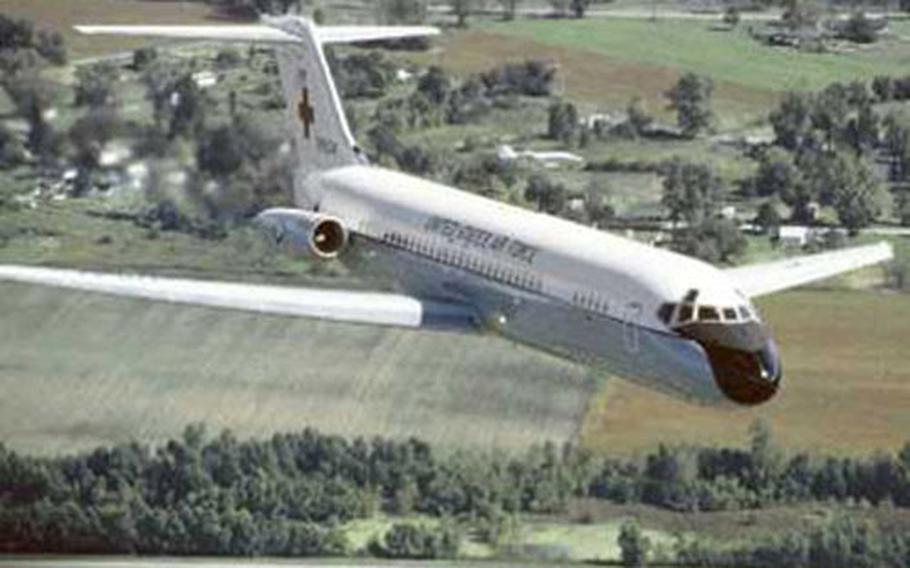 About 272 military personnel and their families are expected to leave Yokota Air Base by the end of October as part of the Air Force&#39;s plan to retire the C-9A Nightingale, according to 5th Air Force spokesman Maj. Eric Hilliard. (Courtesy of USAF)

YOKOTA AIR BASE, Japan &#8212; About 272 military personnel and their families are expected to leave here by the end of October as part of the Air Force&#8217;s plan to retire the C-9A Nightingale, according to Maj. Eric Hilliard, a 5th Air Force spokesman.

Of that number, about 119 military personnel and their families will transfer to Kadena Air Base. Others will rotate back to the United States.

The 1968 airplanes, named after famed war nurse Florence Nightingale, have been the cornerstone of the Air Force&#8217;s medical-evacuation mission for more than 30 years, transporting patients and combat casualties in peacetime and war.

The service announced in July it would retire its fleet of 20 modified Boeing DC-9s, including four assigned to Yokota, in fiscal 2004. Air Force officials have said the vintage birds cost too much to maintain, have a limited range and fewer patients need transport.

The 30th AS at Yokota operates the planes, while the 374th Aeromedical Evacuation Squadron directs patient care.

C-9 pilots will ferry two planes back to the United States on Tuesday, and the other two will head across the Pacific Ocean following a C-9 retirement ceremony Sept. 12 at 10 a.m. in Hangar 15.

Three of the aircraft will be taken to the &#8220;bone yard&#8221; at Davis-Monthan Air Force Base near Tucson, Ariz. The fourth&#8217;s fate has yet to be determined, Mintzlaff said.

The squadron is still flying &#8220;alert&#8221; missions when there&#8217;s a medical emergency and continues to conduct pilot training, Mintzlaff said.

Since Aug. 1, Yokota&#8217;s 36th Airlift Squadron, operating C-130s, and the 909th Air Refueling Squadron and its KC-135s, have flown the routine medical flights. The alert missions will be transferred to Kadena on Monday.

The 30th AS, activated at Yokota in 1992 after four C-9s moved here from Clark Air Base in the Philippines, will be deactivated. The squadron&#8217;s 37 members &#8212; including 26 pilots and 11 enlisted personnel &#8212; will either be reassigned at Yokota or to another base, Mintzlaff said.

Four pilots, for instance, will fly C-21s at Yokota, and two are switching to the C-130 cockpit. The remaining aviators are going to Air Mobility Command units in the United States; Mintzlaff will stay at Yokota as the deputy operations group commander, he said.

Enlisted squadron members will be absorbed by Yokota&#8217;s 374th Airlift Wing and reassigned to other aircraft.

Of the almost 300 people expected to leave Yokota, about 119 military personnel and family members will transfer this fall to Okinawa&#8217;s Kadena Air Base, where Yokota&#8217;s 374th AES will be reactivated to continue the Pacific&#8217;s medical-evacuation mission, Hilliard said. Some personnel have already moved. Patients will be airlifted primarily on KC-135 tankers based at Kadena, configured for medical evacuation.

With the C-9 retirement, the Air Force will no longer have aircraft dedicated to aeromedical evacuation. &#8220;The theory is instead of having something dedicated to that mission, tap into planes that are multirole and base it on priority,&#8221; Mintzlaff said.

The C-9s used to carry anyone who needed to go to a medical treatment facility away from their home base. Now, only patients that need care while in transit &#8212; or specialized attention from flight nurses &#8212; will fly medical evacuation, Mintzlaff said. All others will fly commercial.

The Theater Patient Movement Requirement Center, which fields requests for patient transport, already has been transferred from Yokota to Hickam Air Force Base, Hawaii.