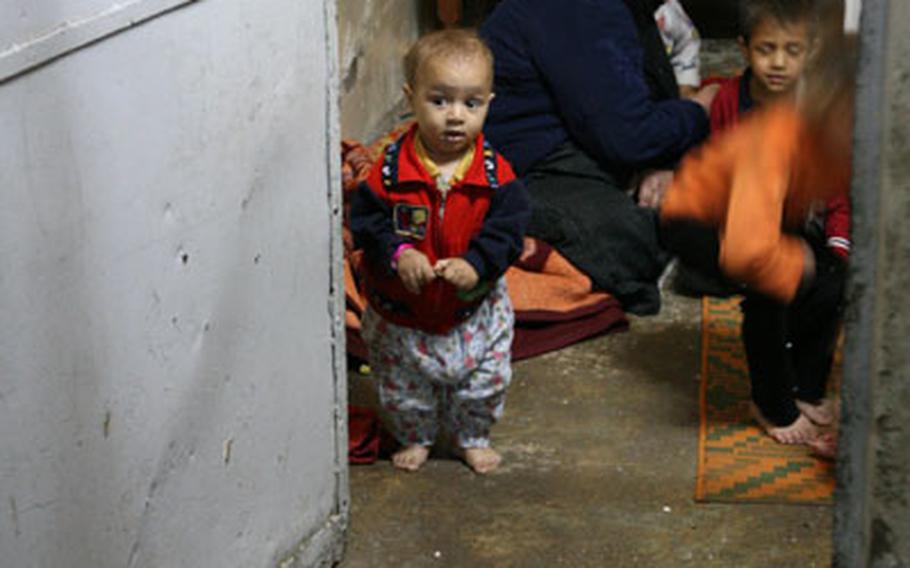 An Iraqi boy looks out of a room at U.S. troops during a raid. The raid, by Company A, 2nd Battalion, 7th Cavalry Regiment targeted suspects in a bombing that killed two U.S. soldiers the previous morning on Halloween. (Drew Brown / S&S)

An Iraqi boy looks out of a room at U.S. troops during a raid. The raid, by Company A, 2nd Battalion, 7th Cavalry Regiment targeted suspects in a bombing that killed two U.S. soldiers the previous morning on Halloween. (Drew Brown / S&S) 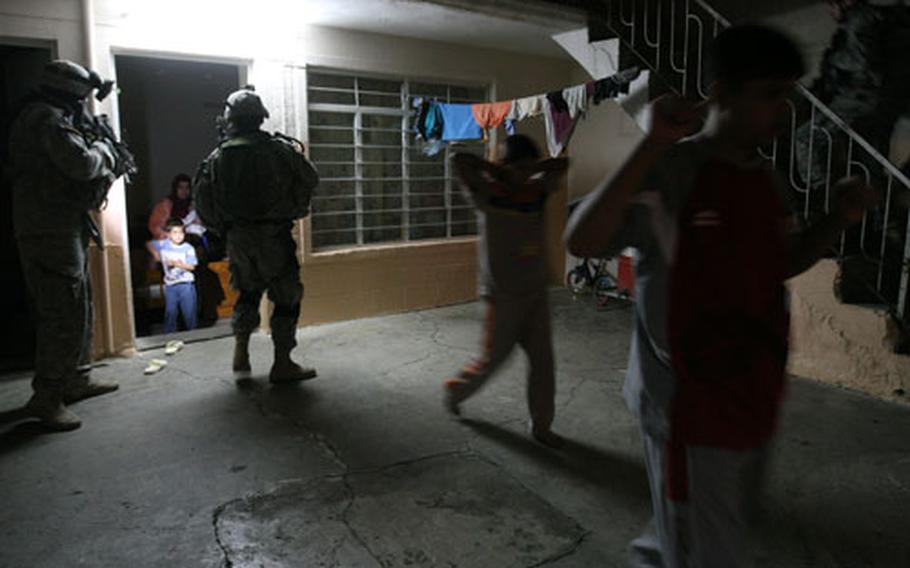 U.S. troops order Iraqi civilians out of a room during a raid. The suspected trigger man was not found, but another suspect was. Two others have since been detained. (Drew Brown / S&S) 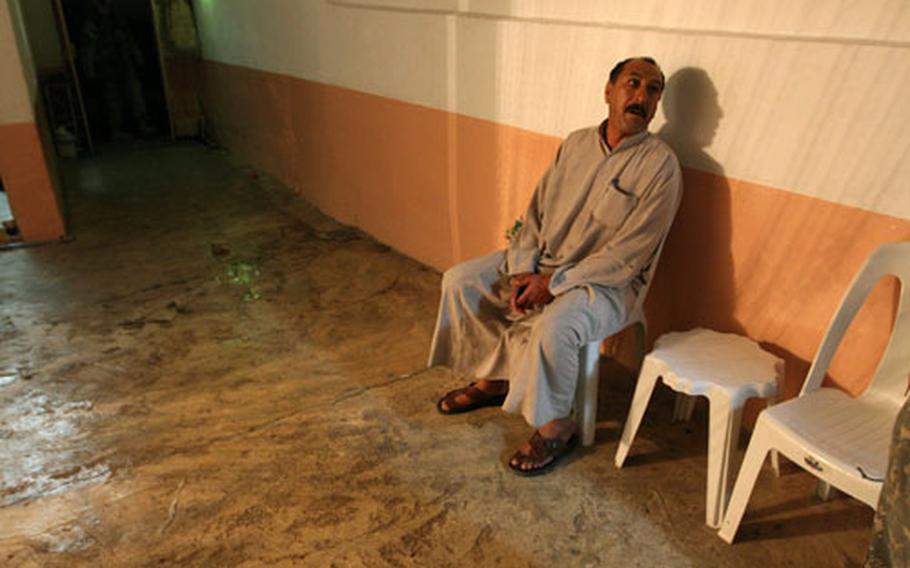 An Iraqi man waits to be taken into custody while U.S. troops from Company A, 2nd Battalion, 7th Cavalry Regiment continue to search his home during a raid in Mosul. The man was identified only as a "high-value target." (Drew Brown / S&S)

MOSUL, Iraq &#8212; Less than 12 hours after insurgents set off a bomb that killed two of their soldiers, three members of the 2nd Battalion, 7th Cavalry Regiment paid a visit to Col. Muhammad, the commander of a local Iraqi army battalion.

It was Halloween night, but Maj. Mark Reeves, Capt. Steve Teege and 1st Sgt. Eric Volk were in no mood for pranks. They wanted information, and if there was anyone in Mosul who could provide it, it was Col. Muhammad, whom U.S. forces here consider the best Iraqi commander they&#8217;ve ever worked with.

As soon as the three walked into the room, Muhammad rose and greeted them warmly, shaking hands and kissing each man on both cheeks, in accordance with Iraqi custom. Muhammad, whose right arm was in a sling as a result of a gunshot wound received during a recent battle with insurgents, motioned for his guests to sit down.

He then announced that he&#8217;d received a tip from a source that could lead the Americans to the insurgent who placed the bomb that killed the two soldiers earlier that day. Capt. Timothy I. McGovern, 28, and Spc. Brandon W. Smitherman, 21, died after their Bradley fighting vehicle ran over an explosive device during a route-clearance mission.

Twenty-four hours later, about 40 soldiers from Company A&#8217;s 1st Platoon received a final briefing on the raid. Lt. Col. Eric Welsh, the 2-7 Cavalry battalion commander, reminded the men to keep their emotions in check during the operation. Many of the young soldiers in the room had been to the scene of the explosion the day before and had helped recover the remains of the two combat engineers.

Before the soldiers could get some payback, they had to first hit another location and scoop up two other wanted men. Volk said he could only identify the men as &#8220;high-value targets, above our brigade.&#8221;

It took a while longer than expected to find the first target house, but once it was located, the raid went smoothly, and the two targets were detained without a shot.

About an hour later, a dozen Humvees full of Company A soldiers rolled into another Mosul neighborhood, along with several Iraqi army trucks. The suspected bombers were in one of four houses along the block. The Iraqis would hit two houses, and U.S. troops the other two.

At the first house, U.S. troops banged on a metal gate. There was no answer, so a soldier blasted off the lock with a shotgun. The house was empty. The next house was also empty. In the third house, a squad from Sgt. 1st Class Miguel Medina&#8217;s platoon came across a frightened family.

The woman gathered up her children and herded them into the room, where they sat barefoot on rugs and pillows. A much older woman followed them. She sat on the floor and fingered her prayer beads with a nervous fury. Two other women and more children were sequestered in a second room upstairs.

There were four men in the house, all brothers, and one teenage boy. The soldiers tested their hands for gunpowder and explosives residue, but all of them came up clean.

After that, the Americans began to relax. Staff Sgt. Dwayne Simmons, 29, of Hollywood, S.C., handed out candy to the children.

A call soon came over the radio that one of the suspected bombers and two other men had been captured in another house.

Speaking through an interpeter, Sgt. David Carte, 29, of Hollister, Calif., told the family that he appreciated their cooperation.

&#8220;Tell them we&#8217;re sorry if we broke anything,&#8221; Carte said. He then asked if the men would be willing to provide information on insurgents in the neighborhood and if he could give them a cell phone number to call.

The men were reluctant to accept the number. They complained that they had frequently called Iraqi police with information but that the Iraqi forces had never done anything about it.

The soldiers left. Back at Forward Operating Base Marez, Teege said that the raid had missed the bomb&#8217;s trigger man.

During a memorial ceremony Saturday for McGovern and Smitherman, Welsh, the 2-7 Cavalry battalion commander, said that subsequent raids had netted two other men reportedly involved with the fatal bombing. He vowed that everyone associated with the attack would be caught.