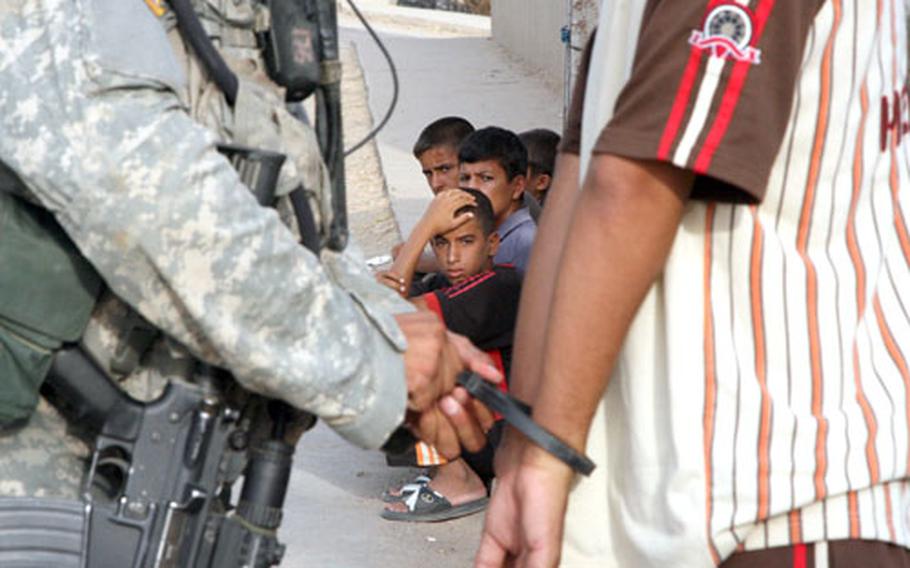 Iraqi boys looks on as a soldier from Company A, 1-30th Infantry, detains a man in Abuwaitha, a village on the Tigris River about 10 miles southeast of Baghdad, after he was observed acting suspiciously. The Iraqi was later confirmed to be someone suspected of firing mortars at nearby Forward Operating Base Murray. (Drew Brown / S&S)

Iraqi boys looks on as a soldier from Company A, 1-30th Infantry, detains a man in Abuwaitha, a village on the Tigris River about 10 miles southeast of Baghdad, after he was observed acting suspiciously. The Iraqi was later confirmed to be someone suspected of firing mortars at nearby Forward Operating Base Murray. (Drew Brown / S&S) 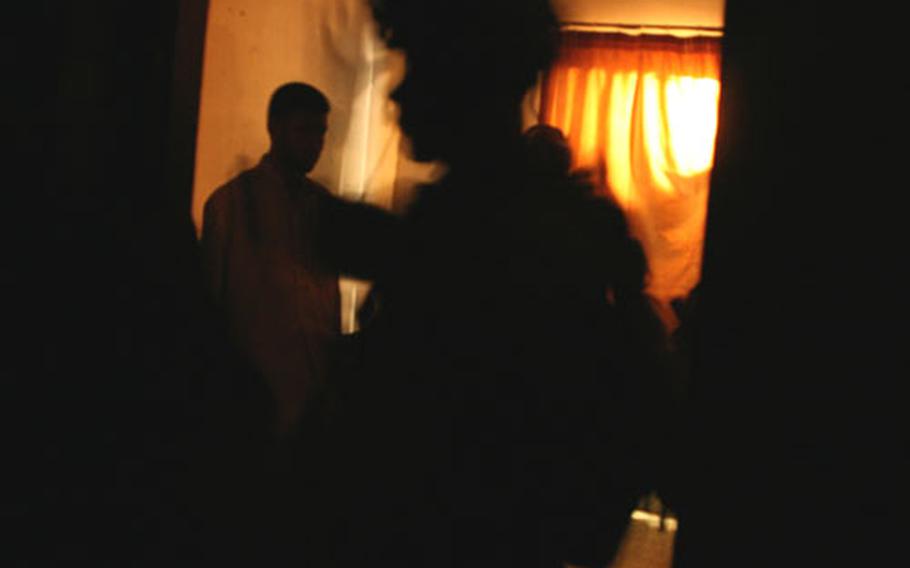 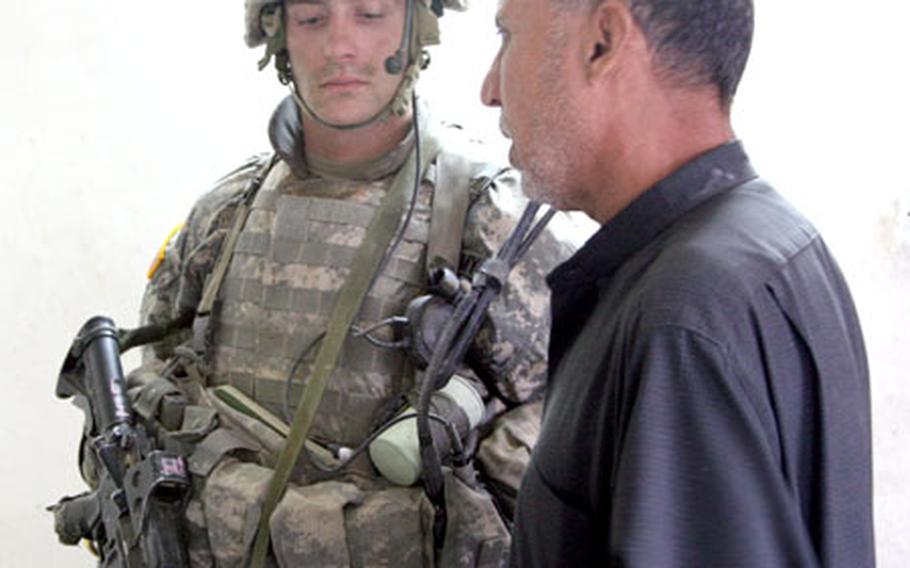 First Lt. Sean Dixon, 29, of San Diego, Calif., questions the father of a suspected al Qaida insurgent during a raid early Sunday in Abuwaitha. At first the man claimed the son didn’t exist. After neighbors confirmed the son’s existence, the man claimed that he’d simply forgotten he had the son. A few minutes later, the son called the father on his cell phone. “I’m very, very sorry,” the man told Dixon. (Drew Brown / S&S) 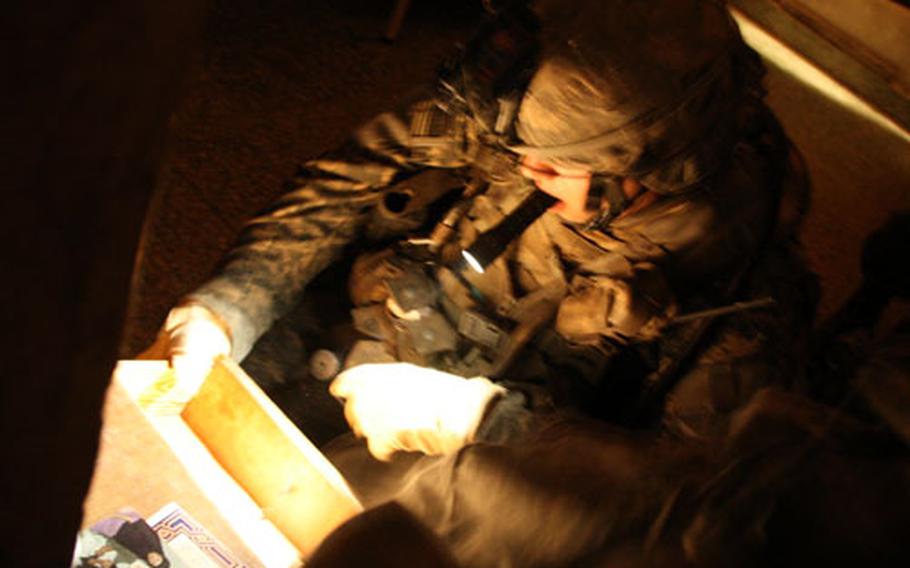 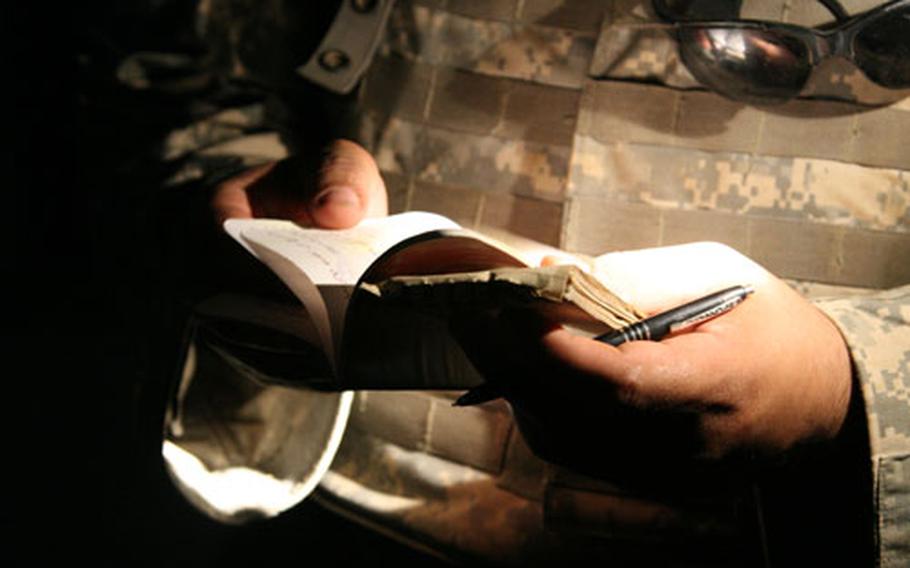 An Iraqi interpreter flips through a notebook looking for any information of intelligence value during a raid early Sunday in Abuwaitha. (Drew Brown / S&S)

ABUWAITHA, Iraq &#8212; U.S. soldiers with the 3rd Infantry Division continued on the offensive against al-Qaida insurgents over the weekend, moving for the first time into this village on the Tigris River, about 10 miles southeast of Baghdad.

In a predawn raid Sunday, troops with 1st Battalion, 30th Infantry Regiment detained six men suspected of links to al-Qaida insurgents. Another three men asked to be detained because they feared being killed by al-Qaida if U.S. forces questioned them and did not detain them, according to U.S. officers.

Lt. Col. Ken Adgie, 1-30th Infantry commander, said the operation was also the first time his forces had made significant use of a locally-recruited militia. The 170-strong &#8220;concerned citizens&#8221; group is aiding his soldiers in identifying local al-Qaida insurgents, Adgie said.

Adgie said the group, which was recruited just last week under the leadership of a local sheik who retired as a general from the old Iraqi army, already have helped U.S. forces identify and apprehend about 10 suspected insurgents.

The raid early Sunday began after U.S. vehicles blocked off all roads leading into Abuwaitha and troops from Company A hiked two kilometers through fields and date palm groves to maintain the element of surprise.

The soldiers began moving around 1 a.m. under a sky lit only by stars and the occasional parachute flare. Somewhere on the eastern side of the Tigris, a distant firefight raged, the night punctuated by the sounds of heavy machine gun fire, sporadic mortar explosions and the crash and rumble of artillery.

By 3 a.m., the soldiers had reached Abuwaitha. Soldiers from 1st Platoon moved quickly towards the first target house. Inside, a woman and two children were asleep in one room. They were brought into the living room and placed under guard. A man, who appeared to be in his late 50s, a younger man and a teenage boy were asleep on the roof. They were escorted downstairs and put into another room.

In a bedroom, Sgt. Chad Price, 26, of Fort Dodge, Iowa, searched through drawers, looking for weapons, incriminating documents and other suspicious items.

Price found a certificate of some kind that bore a likeness of former Iraqi president Saddam Hussein wearing a beret, army uniform and wielding two rifles.

Price threw a stack of Saddam-era money and some coins on top of the certificate. He picked up a pair of pants and dug through the pockets.

In a brightly lit backroom, 1st Lt. Sean Dixon questioned the old man about the whereabouts of his son, Uday. The man denied that he has a son by that name. He had only two sons, he told Dixon.

The soldiers searched the house for about two hours. At 5 a.m., a voice rose in a singing prayer from a nearby mosque.

The soldiers moved on to the house next door, where they repeated the same routine, separating the men from the women. An old man shuffled out of the bathroom, wearing a white T-shirt and boxer shorts. Faint blue tribal tattoos decorated his shoulders and sagging chest.

The old man complained that the soldiers have arrived when it was time for him to go and pray.

Dixon questioned them about the man who lived next door. What was their relation to him? Was it true that he had a son named Uday? Was Uday a member of al-Qaida in Iraq? Where was Uday?

The old man told Dixon that the man next door was his son, but that they were no longer on speaking terms.

Finally, the old man&#8217;s two sons confirmed that Uday did exist and that he was, indeed, a member of al-Qaida in Iraq.

Dixon sent a squad back to the first house and soon followed. He questioned the owner of the house again, asking why he lied about Uday.

The old man told Dixon, sheepishly, that he&#8217;d simply forgotten about Uday. He doesn&#8217;t know where he is, he said. Dixon asked if he had a picture of Uday. The old man shuffled through a stack of photos before finally producing a small snapshot, about the size of a passport photo.

Suddenly, a cell phone rang, the old man thrust a hand in his pocket to answer it, but a soldier snatched the phone quickly from his hand.

An Iraqi translator examined the phone&#8217;s call register and smiled.