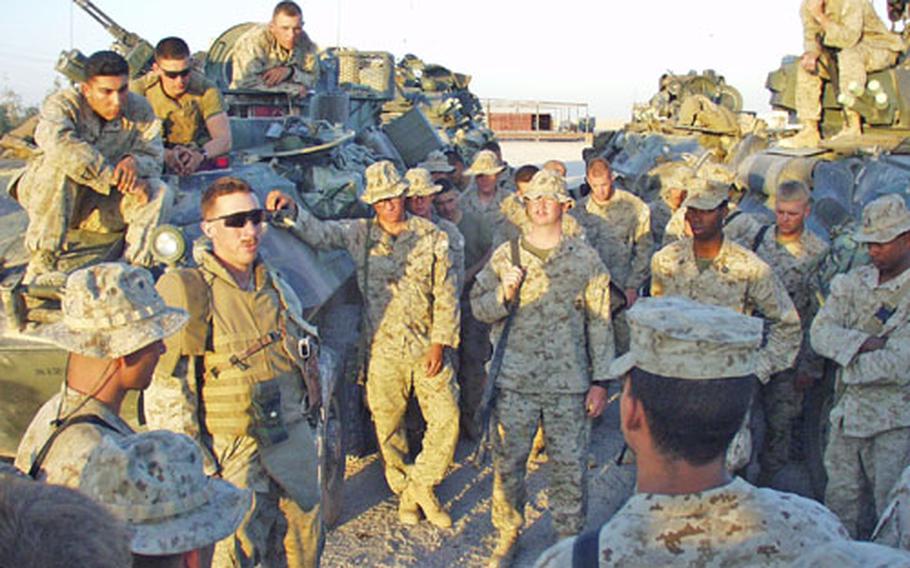 FALLUJAH, Iraq &#8212; The platoon rolled out of Camp Baharia and onto the highway.

In a place where troops face situations that require them to kill or be killed, the mood changes when the sun goes down. So do the tactics.

The five Light Armored Vehicles rolled north on Route 1 into a red sunset. Children in an adjacent neighborhood played soccer while adults stood nearby in small groups. Because it&#8217;s 110 degrees or more in the afternoon, Iraqis often wait until dusk to come outside. That goes for the enemy as well.

The patrol moved ahead with lights out, even on darkened roads. Drivers used night-vision gear to make their way.

In a way, the Marines can see more at night because the tracers of gunfire and blast of rockets stand out in the darkness. The rocky landscape appears dark green through night-vision goggles and appears similar to the surface of the moon.

The patrol pulled off the highway several times and parked in adjacent fields. The eight-wheeled LAVs looked like black silhouettes as they sat parked. The Marines inside watched as convoys rolled by. The truckers were not fired upon.

The troops can hear more at night, too, in the still of night when every little sound stands out.

Explosions are easily heard in the distance. A tiny, unmanned spy plane buzzed overhead, sounding like a giant mosquito.

The Marines, when asked to talk about the difference between day and night patrols, pointed to the differences as they pertain to warfare.

But they also acknowledged that the nighttime weather made for more tolerable working conditions.

Said one Marine: &#8220;[After a daytime patrol] you sleep for like 10 hours and could sleep for a couple more because the sun just drains you.&#8221;

As usual in central Iraq, where months can pass without a single cloud appearing, the night sky was clear and the stars were brilliant. Through night-vision goggles they are even more spectacular, a real life planetarium.

For all the fire, smoke and destruction that mark the Iraqi landscape during the day, working the night patrol can provide the Marines with a pleasant reprieve. When they park their vehicles in a field and watch the highway, and 18-wheelers pass by without incident, the Marines can relax under the stars.

And they talk about women and beer and barbecues.