Pfc. Joseph Sternhagen charges into a house as U.S. and Iraqi soldiers searched scores of residences in Monday’s operation in Bayji, a key crossroads for transportation and oil. (Kevin Dougherty / S&S)

Pfc. Joseph Sternhagen charges into a house as U.S. and Iraqi soldiers searched scores of residences in Monday’s operation in Bayji, a key crossroads for transportation and oil. (Kevin Dougherty / S&S) Army Pfc. Carl Williams escorts a son of the most wanted man in Bayji to a detention area. U.S. and Iraqi authorities suspect the father heads at least four terrorist cells operating in and around the city. (Kevin Dougherty / S&S) 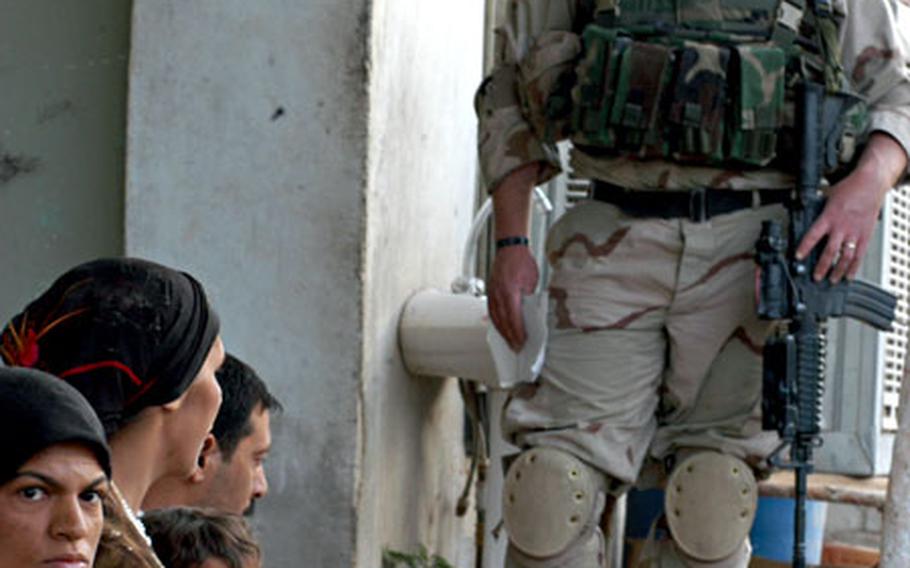 Staff Sgt. Jeffrey James stands watch over an Iraqi family in Beiji while troops search the premises for evidence of support for Iraqi insurgents. None was found. (Kevin Dougherty / S&S) Suspects in Monday’s cordon and search in Beiji had their hands bound by flex cuffs. This man was released about an hour later after being questioned. (Kevin Dougherty / S&S)

BEIJI, Iraq &#8212; The suffocating dust storm that descended shortly before midnight Sunday seemed like an inauspicious start to a mission designed to bag a few baddies from Beiji.

But after a 90-minute delay, the winds diminished enough for Task Force Dragoon to roll forward with an operation that, in the end, netted weapons, a couple of deputies and information on a resourceful facilitator of mayhem.

Instead, the operation led to the apprehension of sons of the man U.S. forces call Mullah Sabah, in addition to the two, low-ranking operatives. The four were among 16 people picked up Monday by a U.S.-Iraqi force that numbered about 600.

Two intelligence officers said afterwards that a third high-value target, as the military calls them, might also have been rounded up. In Iraq, it&#8217;s sometimes not clear right away who is who. Wanted posters often cite names or aliases and list transgressions, but offer no picture of the individual.

That had been the case with Sabah &#8212; until Monday, when Company B, 2nd Infantry Battalion, 7th Infantry Regiment out of Fort Stewart, Ga., paid his two sons an early-morning visit. Along with computers and other stuff, such as cell phones, they found Sabah&#8217;s passport, photo included.

In recent weeks, a rash of car bombs has hit soldiers in Beiji. One soldier was killed last month and several others were injured. Sabah, thought to be behind some of the suicide bombings, allegedly travels to Syria monthly to get funding for his attacks.

Monday&#8217;s early-morning operation, part of an ongoing effort to curb insurgent activity in this predominantly Sunni city, wasn&#8217;t an overwhelming success, in terms of caches, but it did lead to the seizure of 10 AK-47s, 50 magazines, bomb-making material and anti-coalition training videos.

While there are no direct ties to al-Qaida, Capt. Matthew Smith, an intelligence officer, said Sabah&#8217;s &#8220;message is extremely similar&#8221; to the well-known terror organization.

Besides the apprehension of Sabah&#8217;s sons and deputies, Monday&#8217;s effort was largely uneventful. The task force came in heavy to discourage a fight, and none materialized. The mission actually wrapped up earlier than what the Army had anticipated.

Lending muscle to the ongoing operation, dubbed Hurtgen Forest, were about 200 Iraqi soldiers from Beiji and Tikrit. At times, they could be seen entering buildings and courtyards on their own, though U.S. forces were never far away to help out if required.

Like elsewhere in Iraq, U.S. commanders seemed to be making a conscious effort to involve the Iraqi army more and more in operations.