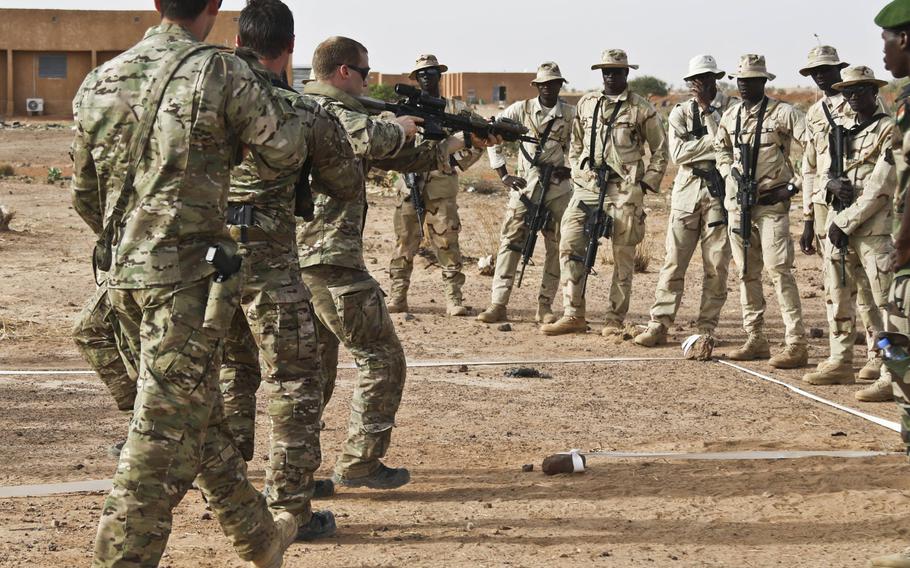 Soldiers from 3rd Special Forces Group (Airborne) train Senegal soldiers on how to clear a room in a glass house during Flintlock 2018 in Tahoua, Niger, April 13, 2018. Defense Secretary Jim Mattis said changes are in the works for how special operations forces are assigned to missions in Africa. (Heather Doppke/U.S. Army)

Soldiers from 3rd Special Forces Group (Airborne) train Senegal soldiers on how to clear a room in a glass house during Flintlock 2018 in Tahoua, Niger, April 13, 2018. Defense Secretary Jim Mattis said changes are in the works for how special operations forces are assigned to missions in Africa. (Heather Doppke/U.S. Army) 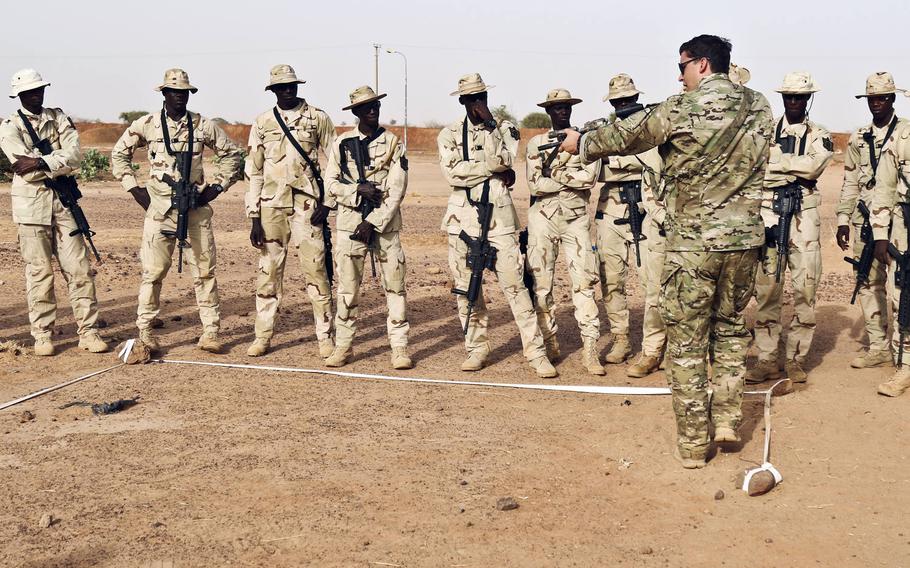 A soldier from 3rd Special Forces Group (Airborne) demonstrates how to clear a room in a glass house as part of Flintlock 2018 in Tahoua, Niger, April 13, 2018. (Heather Doppke/U.S. Army)

Defense Secretary Jim Mattis said the military will modify how special operations forces are prepared for missions in Africa because of a deadly ambush by extremists last year in Niger that revealed a lack of training for troops heading into hot spots.

“On the Niger situation, we are making changes on the personnel assignment policy,” Mattis told Pentagon reporters on Tuesday. “As you know, one of the things we uncovered was some of those troops did not train together, what we thought was for a sufficiently long — long enough time.”

Mattis, who is reviewing changes recommended by U.S. Africa Command, said some new requirements have already been put into place.

An AFRICOM investigation of the October ambush, which killed four U.S. soldiers and brought intense scrutiny to a previously obscure American counterterrorism campaign, determined that the members of the Green Beret and Nigerien team known as Team Ouallam had little experience together as a unit.

“The investigation found that there were areas where training was insufficient, including pre-deployment collective training for Team Ouallam due to high turnover and the assignment of new members,” Maj. Karl Weist, an AFRICOM spokesman, said Wednesday in a statement.

Mattis directed AFRICOM, U.S. Special Operations Command, the Army and the Pentagon’s personnel and readiness office to develop plans to fix the various shortcomings. Those recommendations were recently submitted to Mattis’ office for consideration.

AFRICOM said it will release more details once Mattis’ review is finished.

While the investigation into the ambush highlighted errors in training and planning, lower-level officers were singled out for missteps rather than senior AFRICOM and SOCOM leaders.

Mattis said there would be no pause in counterterrorism efforts.

“As far as … our continued operations there, we continue in support of the French-led trans-Sahel effort down there. And in building … our partner nations’ capacity to fight this enemy.”

On Sunday, France launched an attack in Mali against members of the Islamic State in the Greater Sahara, a group that was blamed for the attack against U.S. and Nigerien troops last year. The French military said Mohamed Ag Almouner, the leader of the group, was killed in the strike near Mali’s border with Niger.