Niger ambush probe to call for closer US mission scrutiny 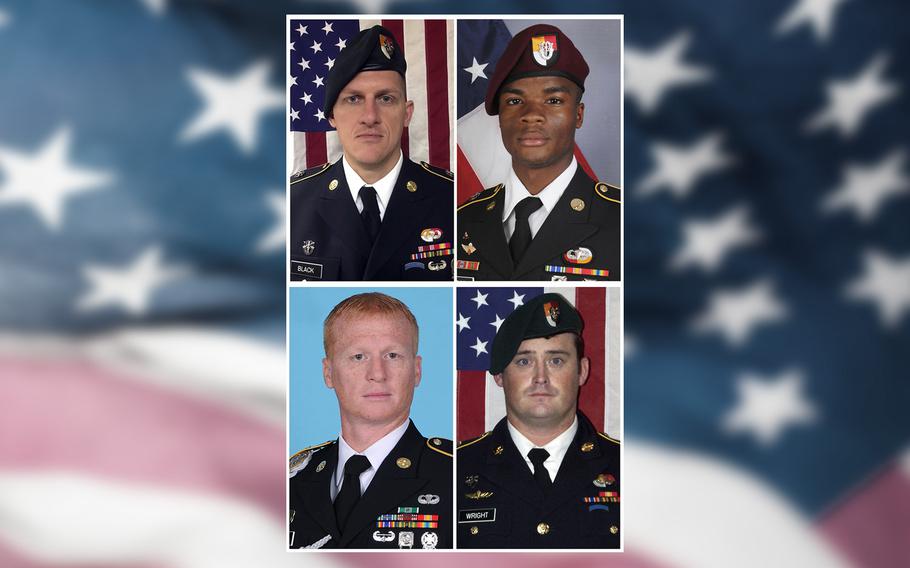 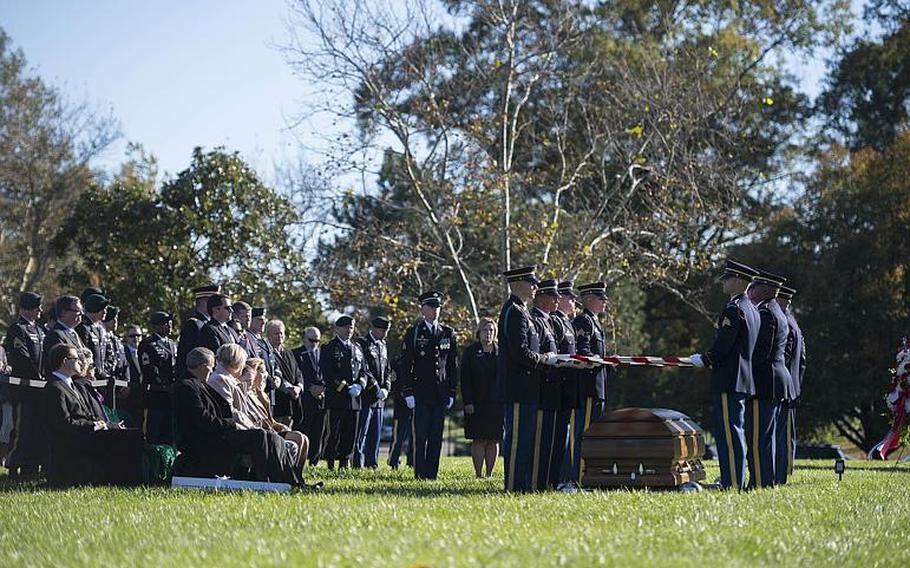 The Army Honor Guard, The 3rd Infantry Regiment Caisson Platoon and the Army band conduct the funeral of Staff Sgt. Bryan Black at Arlington National Cemetery, Virginia, on Oct. 30, 2017. Black died following an enemy ambush in Niger on Oct. 4, 2017. An investigation into the ambush will recommend tighter oversight and higher command approval for patrols in the area. (Elizabeth Fraser/Arlington National Cemetery)

STUTTGART, Germany — A military investigation into an ambush last year in Niger in which four U.S. soldiers were killed is expected to recommend tighter oversight of elite forces on the ground and higher command approval for dangerous patrols in the region.

A draft of the U.S. Africa Command report on the Oct. 4 attack by Islamic State-affiliated militants calls for reducing the number of U.S. ground missions in Niger and stripping field commanders of authority to dispatch troops on risky missions, The New York Times reported Saturday.

Operations will be subject to more scrutiny and may require approval from senior leaders at AFRICOM headquarters in Stuttgart and the Pentagon, the Times reported, citing unnamed military officials.

Commanders in Niger currently have the authority to make decisions on when to launch reconnaissance patrols.

The report, which is expected to be released publicly in the coming weeks, also found a series of missteps on the ground, such as “a breakdown in communications that may have stemmed from a failure by members of the American and Nigerien team, and their superiors, to check their equipment before heading out on the Oct. 4 mission,” the Times reported.

AFRICOM said to Stars and Stripes on Monday that the investigation remains ongoing.

“That report is making its way to me. It’s not yet been sent to me,” he said. “I would expect it as soon as the AFRICOM commander has reviewed it. It is extensive. It is thousands of pages long.”

For several years, U.S. forces have been operating outside the public eye in Niger, where troops have worked alongside indigenous forces to counter various extremist groups. Few outside military circles paid any attention to the U.S. mission there until the deaths of American troops.

Even before the Oct. 4 ambush, forces in Niger have come under occasional fire while conducting joint reconnaissance patrols with their Nigerien counterparts. However, the October ambush of a 12-person U.S. special operations team led to an outcry in Washington. Some lawmakers claimed they were largely unaware of military activities in the region, despite White House letters advising Congress of troop levels.

U.S. military operations have intensified in Africa in the past several years, with Libya and Somalia being the focus. Scores of airstrikes have been conducted in both countries, where U.S. troops also conduct occasional raids. So far, there is no indication that events in Niger — and the possible scaling back of some operations on the ground there — will prompt similar calls for curtailment in Somalia.

In West Africa, al-Qaida-aligned militants, a small local Islamic State affiliate and Boko Haram are among the groups that have been a source of concern. Still, there has been little sign that any of those groups, which have a history of shifting alliances and affiliations, have the capacity to pose a threat beyond the region.

“Many of the terrorist groups currently on the U.S. military’s watch list — for which the military is deploying additional special operations troops and building new installations — do not directly impact core U.S. interests,” wrote security expert Steven Feldstein on Friday, in an analysis of Africa terrorism trends for the Carnegie Endowment for International Peace.