Nicholson: US troops will assume more risk in Afghanistan in next fighting season 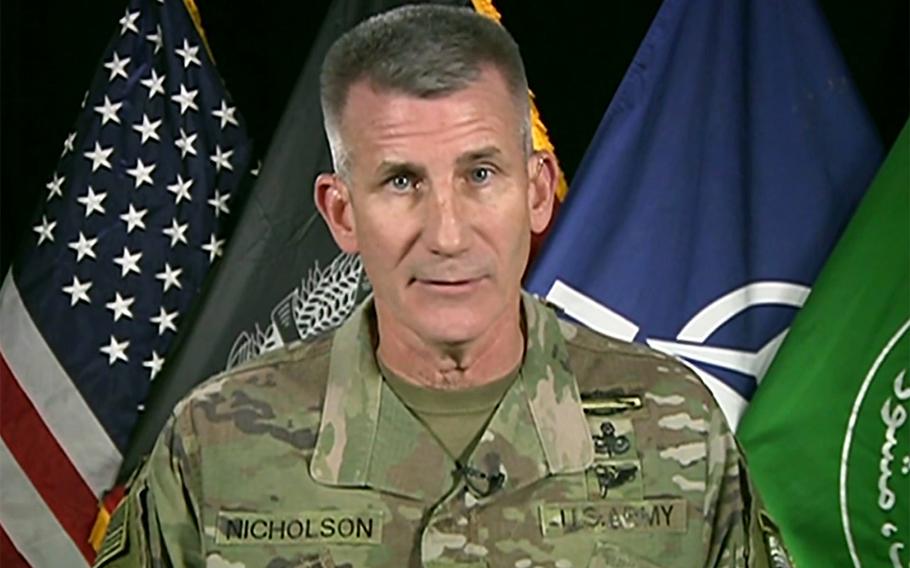 In a capture from a DOD video, Gen. John Nicholson, the commander of American and NATO forces in Afghanistan, talks to reporters at the Pentagon from Kabul, Nov. 28, 2017. (From a DOD video)

WASHINGTON – The United States will send more troops onto the battlefield alongside Afghan forces next year as part of a revamped strategy designed to “turn the corner” on the 16-year war against the Taliban, the top American commander in Afghanistan said Tuesday.

U.S. troops will accompany Afghan units at the Kandak level next year, placing them closer to the front lines than most American soldiers have operated in recent years as they have advised primarily at the brigade and corps levels from the relative safety of forward operating bases, said U.S. Army Gen. John Nicholson, the commander of American and NATO forces in Afghanistan. Advising from the Kandak – the Afghans’ equivalent of an American battalion – will put U.S. troops in a better position to provide Afghan commanders advice during the fight as well as increasing their ability to call for American support such as air power, artillery or medical evacuation, he said.

“Yes, there will be greater risk, absolutely,” Nicholson told reporters from Kabul.

He said as many as 1,000 American troops would likely be conducting patrols and missions with Afghan forces at any given time once the fighting season begins in the spring.

Nicholson said the United States would go to “great lengths” to ensure American troops near the front lines are as well protected as possible.

“Any time a U.S. soldier, sailor, Marine or airman steps foot on the battlefield, there is always a whole array of support behind them,” Nicholson said.

The move is part of President Donald Trump’s new strategy for South Asia that he unveiled during the summer. The plan is designed to defeat the Taliban and terrorist groups in Afghanistan and also lend stability to the region that includes Pakistan and India.

The United States has already added some 3,000 troops to bring its total in Afghanistan to about 14,000 and lifted several restrictions on using airpower against the Taliban. Calling the new strategy “a game changer,” Nicholson said the adjustments were already making a difference in the long-running war that he has characterized as a stalemate since last year.

“That’s why I express confidence that we are on our way to a win,” he said Tuesday.

In addition to moving American combat advisers closer to the front lines to help Afghans hunt down Taliban fighters in simultaneous offensive operations across the country, the United States has stepped up its bombing campaign.

In 2017, U.S. aircraft have dropped 3,554 munitions against Taliban, al-Qaida and Islamic State targets through October, compared to dropping 1,337 bombs in 2016, according to U.S. Air Forces Central data.

The new strategy aims to drive Taliban leadership to negotiate a cease fire within two years. To achieve that, Nicholson said Afghan forces will need to gain control of 80 percent of Afghanistan’s nearly 36 million people by 2019.

As of August, the government controlled or influenced only 56.8 percent of the country’s 407 districts, a 1 percent decline during the past six months and a more than 6 percent decline from the same period last year, according to the most recent report by the Special Inspector General for Afghanistan Reconstruction. The Taliban controlled or influenced 13 percent of the population, a 2 percent increase in its territory from the previous six months, the same report found. The rest of the nation is contested.

Nicholson on Tuesday provided a more optimistic assessment, announcing the Afghans controlled about 64 percent of the population and the Taliban control about 12 percent.