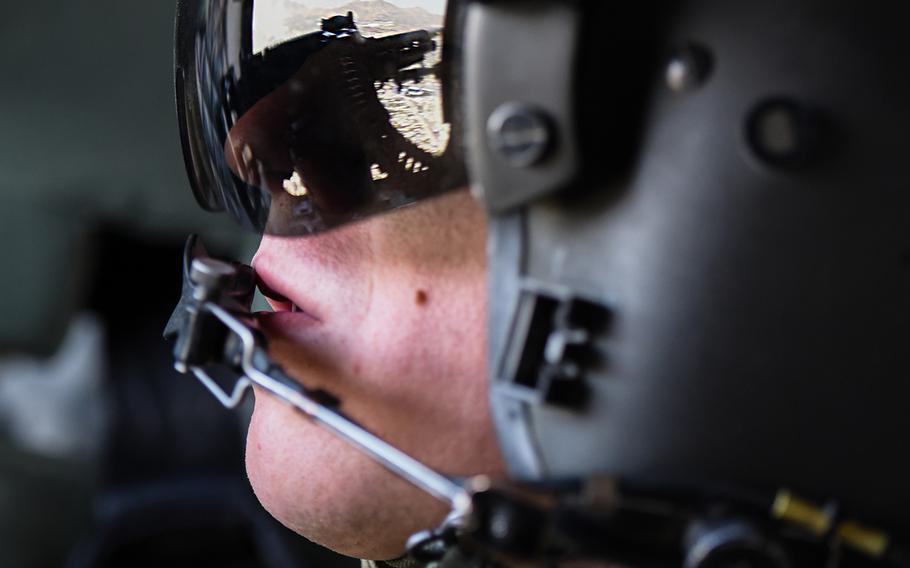 Buy Photo
Army Sgt. Michael Buchanan looks out over Kabul, Afghanistan, as he mans an M2 .50-caliber machine gun on a CH-47 Chinook during a flight from Bagram Air Field on Tuesday, July 12, 2016. (Corey Dickstein/Stars and Stripes) Buy Photo
An M2 .50-caliber machine gun sticks out of a window of an American CH-47 Chinook helictopter as it flies north of Kabul, Afghanistan, on Tuesday, July 12, 2016. (Corey Dickstein/Stars and Stripes) Army Gen. John “Mick” Nicholson said the new “use of force” measures have had an immediate effect on the Afghan security forces fighting the Taliban.

“We’re using our new authorities so that the Afghans can go on the offensive,” Nicholson said. “So far they have been very successful.” He did not say exactly how many times he’s approved their use.

Nicholson was granted the new authority in mid-June to strike the Taliban before they attack Afghan security forces.

Previously, Afghan security forces had to be under heavy duress and request American air support before U.S. aircraft could strike the Taliban. President Barack Obama approved the new measures recently at the request of Nicholson, Defense Secretary Ash Carter and other senior military leaders. Nicholson must personally approve their use in each case.

“It makes a lot more sense for our commanders working with their Afghan counterparts to look at the battlefield, look at what they know the enemy has planned and how the enemy is moving and to anticipate their movement,” Carter said. “That makes for a much more efficient use for a lot of reasons.”

The new measures — which include air power and “a whole suite of combat enablers” that Nicholson did not specify — have been effective as the Afghans have launched offensive operations in the country’s north and south, including in volatile Kunduz and Helmand provinces.

They would have made a huge difference last fall year when the Taliban briefly captured Kunduz city, said Nicholson, who took over command of U.S. and NATO forces in Afghanistan in April. In that battle, American air power was used “defensively,” to ensure the entire city did not fall into insurgent hands.

Under his new powers, the general said, he could have struck areas where the Taliban fighters were massing to begin the siege on the city.

“Now with the new authorities that we have … it’s more an offensive nature to the operation,” Nicholson said.

Ghani said the additional American support, combined with general improvements in the 352,000 Afghan military and federal police forces, has allowed his troops to accomplish in three to six months what it took the Afghans all of 2015 to achieve.

“Each new authority is equal to 20,000 armed forces, I must say,” Ghani said. “This is an example of great trust in our partnership.”

Carter’s trip to Afghanistan, which followed a visit Monday to Baghdad came after last week’s announcement that the U.S.-led NATO coalition would continue its training mission here through next year at current troop levels.

At a NATO summit in Warsaw, Poland, officials on Saturday committed at least 12,000 troops from the 39 alliance and partner nations to the Resolute Support train-and-advise mission in Afghanistan.

Coalition nations stepped up to commit to continuing the mission after Obama last week pledged to leave 8,400 American troops in Afghanistan through the end of his presidency, backtracking on his earlier plan to draw down to 5,500 servicemembers. About 6,700 of the U.S. troops will support the noncombat NATO train-and-advise mission, while the most of remainder will continue unilateral counterterrorism operations against al-Qaida and the Islamic State group. Some — roughly 3,000, Nicholson said — will support both operations.

Obama ended the United States’ major combat role, which dated to late 2001, at the end of 2014. That put the Afghan National Security Forces in the lead of the fight against the Taliban. Last year, Afghan troops suffered the largest number of casualties of any point in the war as insurgent fighters made inroads in several areas around the country, especially in volatile regions in the south and the east.

The Afghans have continued to take large numbers of casualties in 2016. They have managed to keep the Taliban from capturing any major urban centers, but the Islamist group does control several districts throughout the country.

The setbacks contributed to the U.S. decision to pull out only 1,400 troops. The Afghan forces have “made an enormous amount of progress,” Carter said, but they still lag behind in several key areas, including intelligence, command and control, aviation and logistics.

“We are committed to a safe and secure Afghanistan and thank our American partners and NATO partners for seeing that commitment,” Ghani said. He also thanked the Afghan National Security Forces, who “at the cost of their blood earned the freedom and maintained that freedom.”