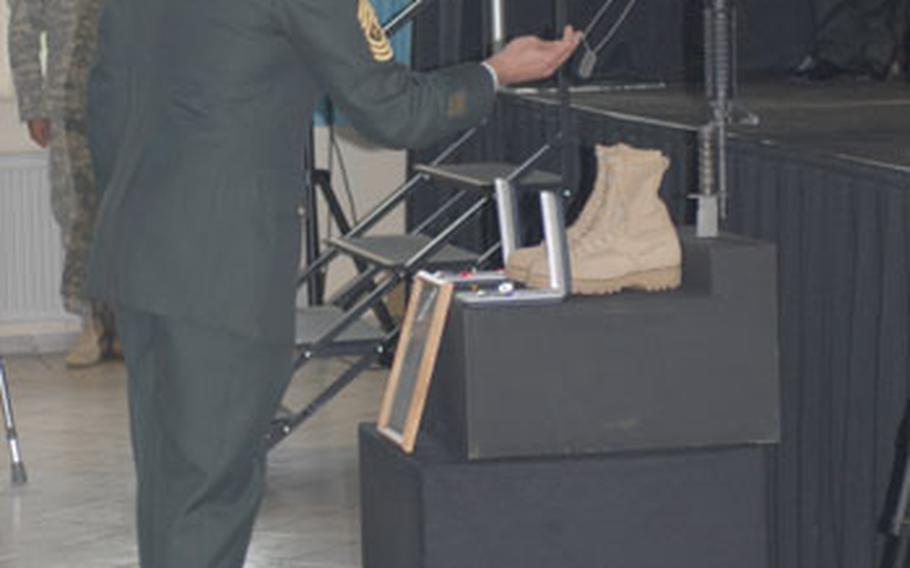 A soldier pays his last respects at Hohenfels to Pfc. Tan Ngo, who was killed in action in Afghanistan on Aug. 27. (Seth Robson/S&S)

HOHENFELS, Germany &#8212; Team Cherokee commander Capt. Terry Howell&#8217;s voice broke as he stood on stage, with the aid of crutches, at the Hohenfels Community Activity Center.

He was sharing memories of one of his soldiers, Pfc. Tan Ngo, 20, who was killed in action in Afghanistan last week. The community center was packed with members of Ngo&#8217;s unit, 1st Battalion, 4th Infantry Regiment, and their families.

In late June, when Ngo was still a teenager, he deployed to Zabul province with Team Cherokee, a company task force led by Howell.

When the company commander visited Forward Operating Base Mizan, one of three isolated outposts held by Team Cherokee soldiers, Ngo manned a machine gun in his truck.

The young soldiers carried out his duties for the commander like a consummate professional, but around other junior soldiers he had a reputation as a joker, recalled Howell, who was shot by enemy machine-gun fire during an Aug. 3 ambush near Forward Operating Base Lane. A bullet shattered Howell&#8217;s left kneecap and broke the femur in four places before traveling into his right calf.

"[Ngo&#8217;s death] brings home the dangers we soldiers face daily in Afghanistan," said Howell, whose combat wounds are more evidence of the lethal enemy Team Cherokee is fighting. "It is hard to stand here today recovering while my own soldiers make the ultimate sacrifice."

Howell is recovering and hopes to rejoin his men soon.

Statements from Ngo&#8217;s comrades downrange, read at the ceremony, spoke of a boy who grew to be a man in Afghanistan, of someone who bragged about his little brother and took care of his mates.

"He died with his head up, chest out and putting one foot in front of the other with courage and commitment to us," said one of the statements.

"He was a big Lakers fan. He was also a great player and could shoot 3-pointers," he said.

"His mother said they were proud of what he did and they wanted us to keep his memory alive. He never let his country down," Howell said.

Ngo, a Buddhist whose parents came from Vietnam, died at the hands of a well-trained enemy who was professional and conducted a well-planned operation. He was hit by an initial burst of fire from the enemy and was medically evacuated to Kandahar, where he died of his wounds on Aug. 27, he said.

Ngo is the first 1-4 soldier killed at Mizan, where U.S. forces are battling to keep a district center relevant in the face of enemy attempts to keep people away with roadside bombs so they can set up their own shadow government in another area.

Howell said a 75-student school was reopened at Mizan earlier this year and there are plans to open a girls&#8217; school there.

"Our being there has made a big difference, but it has cost us the life of one of our finest young soldiers," he said.