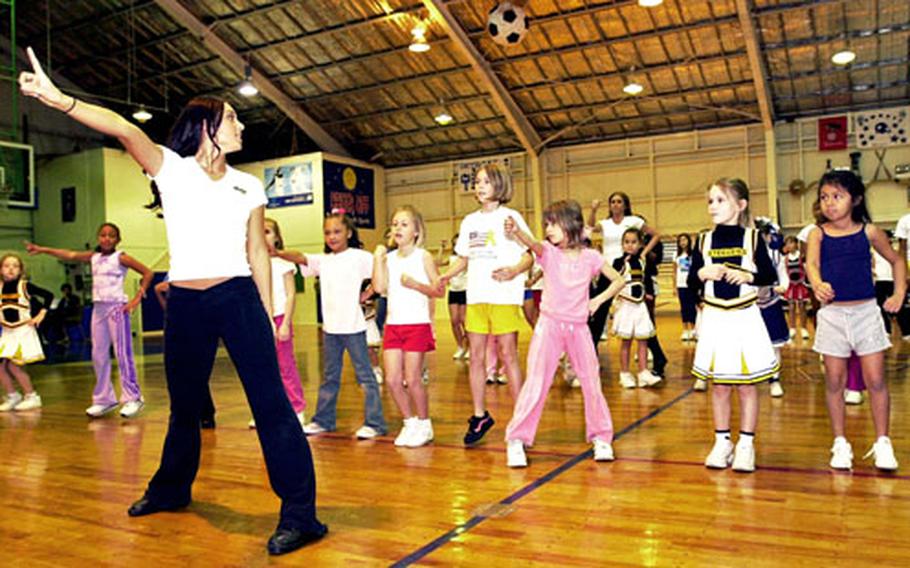 KADENA AIR BASE, Okinawa &#8212; Young cheerleaders here got a treat Sunday from professional National Football League cheerleaders at a free, three-hour clinic at the O&#8217;Connor Gym.

Three St. Louis Rams cheerleaders recently made the trek to Okinawa and taught 43 young cheerleaders, ranging from ages 5 to 18, how to perform an NFL-style dance routine.

The Rams cheerleaders were brought to the base courtesy of the 18th Services Squadron, according to Jon Boyd, director of the Schilling Community Center. He said the squadron was contacted and asked if they were interested in bringing the cheerleaders to the base, and they were more than happy to oblige.

The cheerleaders were scheduled to make appearances at Banyan Tree, Rocker NCO, and officers clubs during the Super Bowl on Monday morning, as well as the base&#8217;s Marshall Dining Facility, Boyd said.

First-year Rams cheerleader Erin Donnelly, who has been dancing for 15 years, said it was &#8220;special to be able to spend time with the girls&#8221; on Sunday. She said she was honored to make the trip, which is her first to Japan.

Donnelly said she remembers how it felt when she was little and was able to work with experienced cheerleaders, and she&#8217;s happy to give back to those who want to learn. &#8220;Just to be considered a role model feels really special,&#8221; she said.

Fellow Rams cheerleader Angeline O&#8217;Neal, a three-year squad veteran and dance instructor, said she was excited about the clinic and enjoyed the experience.

For Michelle Depue, 13, who has cheered for three years, the clinic wasn&#8217;t quite what she thought it would be, but she said it was a lot of fun. She had expected to learn more cheers and gymnastics-style moves instead of dance. &#8220;It&#8217;s a one-time opportunity to meet the St. Louis cheerleaders and learn from them,&#8221; she said.

Kailee Shumaker, 12, who has cheered for five years, said the experience was great.

While the first part of the trip was a success, Donnelly and O&#8217;Neal said they were looking forward to watching the game with the troops. Donnelly said they will be at the clubs to meet the troops and sign Rams cheerleader calendars and posters, as well as to &#8220;say hi and thanks,&#8221; and not root for the Rams. She&#8217;s cheering for the Seattle Seahawks.