Next round of Camp Humphreys construction to begin in August 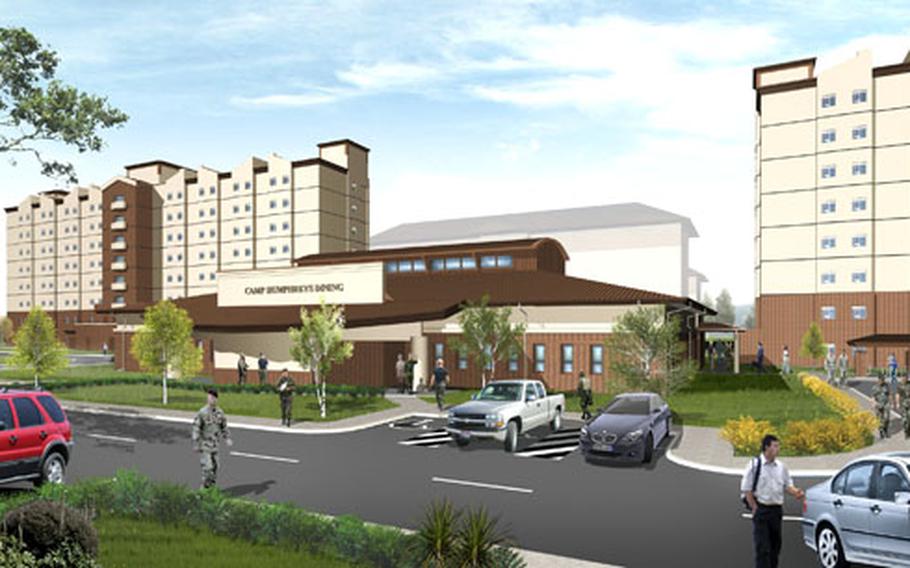 An artist’s rendering depicts a dining hall and new barracks slated for construction at Camp Humphreys in South Korea. The facilities are part of a new round of building that will see barracks and other structures go up in the post’s MP Hill and Zoeckler Station areas by 2008. The picture shows part of the MP Hill portion of what’s planned. (Artistâ™s rendering courtesy of U.S. Army Corps of Engineers)

PYEONGTAEK, South Korea &#8212; Workers at Camp Humphreys are gearing up for another major building cycle that will see construction of new barracks, a dining hall, military offices and a sports field by 2008.

The $55 million project is the latest step in the U.S. military&#8217;s push to transform Camp Humphreys into its main installation on the peninsula under a U.S.-South Korean agreement.

&#8220;It&#8217;s going to put the commanders and the soldiers in efficient buildings designed for the purposes that they&#8217;ll be used for,&#8221; said Camp Humphreys spokeswoman Susan Barkley.

Construction will be concentrated in two sections of the post.

Their first floors will have a &#8220;mud room entrance&#8221; in which soldiers can clean boots and gear, a kitchen, multi-purpose room and two large laundry rooms, Reiff said.

Their upper floors each will have a smaller laundry room and a lounge.

Both buildings will have a small parking area and covered ground-floor bicycle racks.

&#8220;This is more of the trend to house our soldiers in modern, comfortable, energy-efficient barracks,&#8221; Barkley said.

Also coming is a new dining hall that can seat 460 but can serve a total of 1,300 soldiers during a single mealtime, Reiff said.

It will be a separate structure of some 30,000 square feet, set between the two barracks.

Nearby will be a two-story company operations building housing two separate companies. Each company will have administrative offices, an arms room, equipment lockers and other storage space, Reiff said. A separate structure will house a unit mail room.

Construction is to start next month and finish in June 2008.

Zoeckler StationAnother company operations building of identical design will be built in this area, plus two six-story barracks that can house 348 occupants each.

Each building will have a ground-floor covered bicycle rack; a 19-space parking lot will serve both.

Each building will have four elevators and two first-floor laundry rooms and mud rooms. The third, fourth and sixth floors will have lounges; the second and fifth, kitchens; and every floor, a storage room.

Work on the barracks complex is to begin in August and wrap up in November 2008.

Battalion and company operations building construction is to run from June 2007 to June 2008.

The Poong Lim Industrial Company Ltd. in Seoul is to perform the work under contract with the U.S. Army Corps of Engineers.