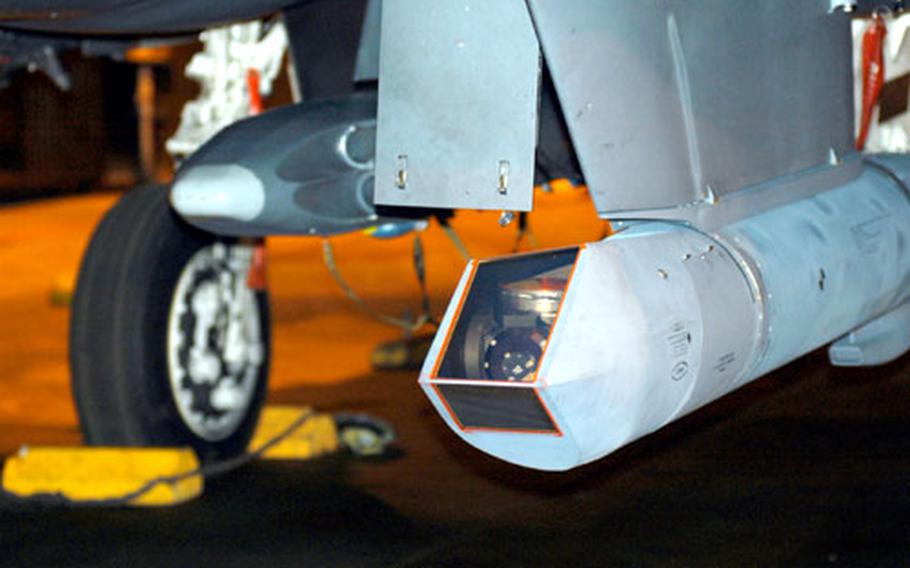 AVIANO AIR BASE, Italy &#8212; The images have aired countless times on CNN. A black-and-white video shows the top of a building in Iraq. Cross hairs pinpoint its center. A falling canister enters the picture. The building is decimated.

The viewer has just witnessed the bombing of a building exactly as the pilot in the air saw it.

That television experience is about to get even better as the Air Force and National Guard install the latest version of the camera that takes those video images.

The camera, called a targeting pod, gives pilots and war planners on the ground a picture of what&#8217;s going on beneath the plane it is mounted on. Pilots use the images to lock onto bombing targets. War planners use them to coordinate ground troops. And CNN uses it for jaw-dropping news footage.

The latest version of the device, called the Sniper Advanced Targeting Pod, quadruples the zoom power of the equipment being used on most Air Force planes, said Maj. Pat McAtee, chief of advance programs for the 52nd Fighter Wing at Spangdahlem Air Base, Germany.

So while pilots bombing Saddam&#8217;s palaces at the beginning of the war in Iraq could make out distinct buildings from 20,000 feet in the air, pilots using the sniper pod can see people, McAtee said. The targeting pod was also designed to take Global Positioning System coordinates that a pilot can plug into GPS-guided bombs, giving pilots better bombing accuracy than previous versions offered, McAtee said.

The sniper pods cost $1.3 million each, and the Air Force expects to buy about 400 of them, according to the Air Force&#39;s Aeronautical Systems Center, which manages weapons systems.

The sniper pod was first used downrange in January by the 494th Fighter Squadron out of RAF Lakenheath, England, base spokesman Master Sgt. Will Ackerman said.

The 510th Fighter Squadron at Aviano Air Base received 20 of the new targeting pods last month. The squadron will deploy downrange with them and leave them there for other squadrons to use, said Capt. Steve Gadoury, a pilot with the 510th.

Pilots who used the sniper pod downrange told Gadoury that they flew over their tents and were able to tell which airmen were in the area by the way they walked, Gadoury said.

A primary mission for Spangdahlem&#8217;s F-16 pilots is finding enemy surface-to-air weapons and destroying them.

In the past, that meant pilots had to fly low enough for their targeting pods to pick up small images, putting the pilots in danger, McAtee said.

With the sniper pod, which has not arrived at Spangdahlem yet, pilots will be able to fly above enemy fire and lock onto their targets, McAtee said.