Next film to put actor Lemmon in 'Army' as ensign 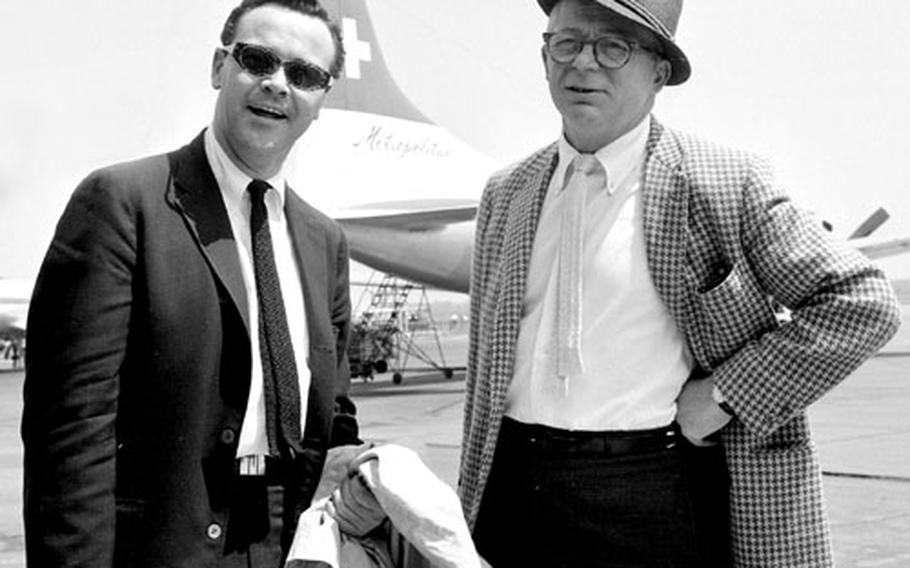 Buy Photo
Jack Lemmon and Billy Wilder arrive in Frankfurt on a promotional tour in 1959. (Stars and Stripes)

FRANKFURT (S&S) &mdash; Servicemen can expect a new film comedy with a military setting, "The Wackiest Ship in the Army," starring Jack Lemmon. That's the word from the 34-year-old star himself, who stopped over briefly at Frankfurt Airport here en route from Berlin to Zurich, Switzerland.

The pleasant-mannered actor was accompanied by director Billy Wilder and writer J.A. Diamond, authors of United Artists' current comedy "Some Like It Hot," featuring Marilyn Monroe, Tony Cutris and Lemmon. The trio is in Europe to publicize the film.

Lemmon, who was an ensign in the Navy, said, "This new film, which they'll start shooting next month, is based on an actual story. It seems the Army once did have two ships assigned to it, during World War II, and the picture is about one of them.

"It'll concern two officers who serve aboard &mdash; one, an ensign played by myself, and the other an Army lieutenant. Naturally, they're always cutting each other's throats. I think it'll be one of the funniest pictures I've ever been in."

Wilder, an Academy Award winner, will work with Lemmon and Diamond again in another new film, "The Apartment," on which shooting will begin this fall.

Wilder also said he planned to do a picture in Berlin.