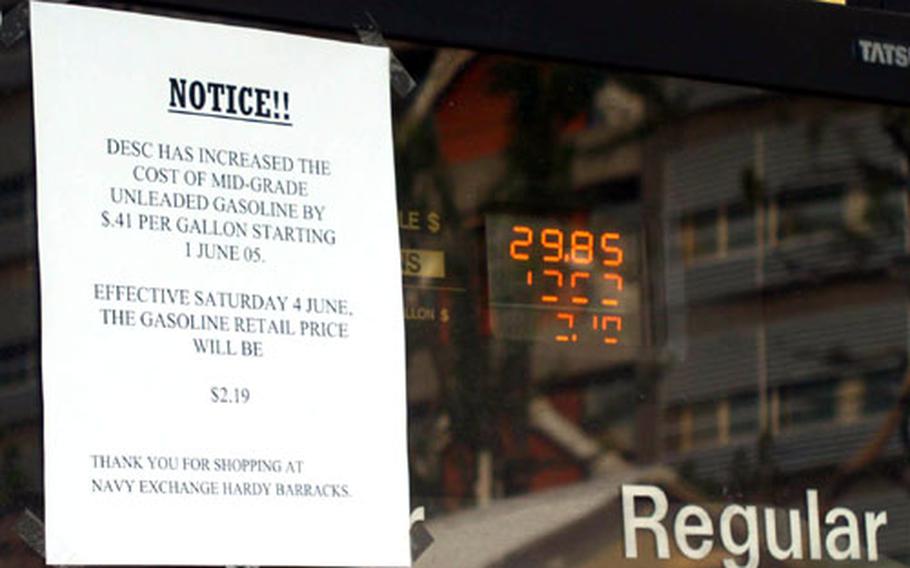 A sign at the Navy Exchange Hardy Barracks Mini-Mart in Tokyo announces that the Defense Energy Support Center has raised the wholesale cost NEX pays for gas by 41 cents. NEX gas stations in Japan and South Korea raised their retail prices at the beginning of the month to reflect the new cost. (Thomas P. Skeen / S&S)

Sturkie noted the 35-cent increase &#8220;is more in line with AAFES prices, but we did not pass the entire increase on to consumers.&#8221; The exchange does not anticipate any other dramatic price increases in the near future.

The NEX gasoline prices at Sasebo, Yokosuka Naval Base and Naval Air Facility Atsugi were $1.74 per gallon before the increase, store employees said Wednesday. The price now is $2.09 per gallon at each facility. At the Hardy Barracks NEX in Tokyo, unleaded jumped to $2.19 a gallon.

Chinhae Naval Base, South Korea, doesn&#8217;t have a Naval Exchange gas station, but people can buy gas for their privately owned vehicles through the base&#8217;s official gas pumps at Navy Exchange prices.

NEX officials in Japan referred all questions to the Navy Exchange Service Command, or NEXCOM, headquarters.

&#8220;NEX does change prices monthly at some overseas locations but that is because the (wholesale) price changes monthly,&#8221; he stated.

In February, NEX, like AAFES, was paying $1.38 a gallon for wholesale gas for fiscal 2005, according to information provided to Stars and Stripes.

A memorandum dated May 26 on the DESC Web site at www.desc.dla.mil notified government wholesale buyers that prices would increase June 1 for a variety of fuel types based on projections of continued high costs per barrel of crude oil.

The short-term outlook for fuel costs in the United States is as follows, according to the Department of Energy Web site, www.doe.gov: