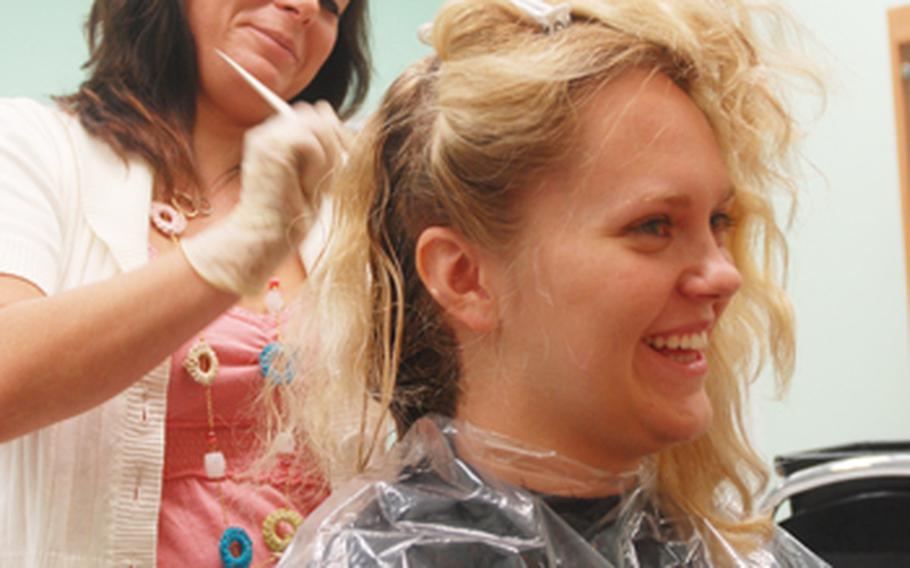 Hairdresser Laurel Still gets to work on Nicole Rebugio’s hair at Stylique on Monday. (Seth Robson/S&S)

GRAFENWÖHR, Germany — A plan to replace German staff at an on-post spa and beauty shop here with South Koreans has sparked complaints from German base workers and some of their American customers.

The workers are employed at two concession shops inside the Army and Air Force Exchange Service’s new $38 million mall at Grafenwöhr. The Spa provides massages, facials, manicures and pedicures and Stylique is a women’s hairdressing salon.

Kim Chun Ho, who owns The Spa and Stylique, said Sunday that workers from another firm operating on-post at Yongsan Garrison in Seoul, South Korea, will replace some of his German staff from next month.

Kim, who has provided hairdressing and tailor services to the U.S. military in the Middle East since 1991, said the Grafenwöhr shops have lost money since they opened last year.

American customers at Grafenwöhr are unhappy with the standard of service provided by the Germans, he said.

"We keep having complaints at the Spa. AAFES has those complaints on record," he said, without elaborating on the nature of the complaints.

Kim said the Korean workers, who will get the same wages as the Germans, are used to dealing with Americans at Yongsan and will provide a superior standard of service.

"Money comes second. The customers must be happy and satisfied with our service," he said.

A Stylique employee, who asked not to be identified, said she expected four staff from the hairdresser and six from the Spa to lose their jobs.

"A couple of us have been with this organization for six or seven years. This is our third boss and nobody complained before that they didn’t make money," she said, adding that the hairstylists receive wages laid down by German law.

"I don’t like it to look like we are lazy people who sit around and don’t work," she said.

One person using the Spa on Sunday was Sgt. Ovidio Saldivar, 25, of La Feria, Texas.

Saldivar said he gets regular massages there to loosen him up for football, softball and physical training while his wife goes to the spa for pedicures.

He said a change to Korean staff would not put him off going to the spa, although he likes the people who work there now.

However, Department of Defense Dependents School teacher Rhoda Wilner, at Stylique for a haircut on Sunday, was unhappy about the decision to fire the Germans.

"Some of these people have been working here for years. A lot of teachers come here, so we really like it and it will be sad to see them go. People are talking about it on base," she said.

AAFES does not get involved in the employment decisions of concession holders, he said, but added that there would be chances for workers from the spa and Stylique to get other jobs with AAFES.

"We have the 2nd Stryker Cavalry Regiment returning here (from Iraq) in a month or so. There will be opportunities," he said.