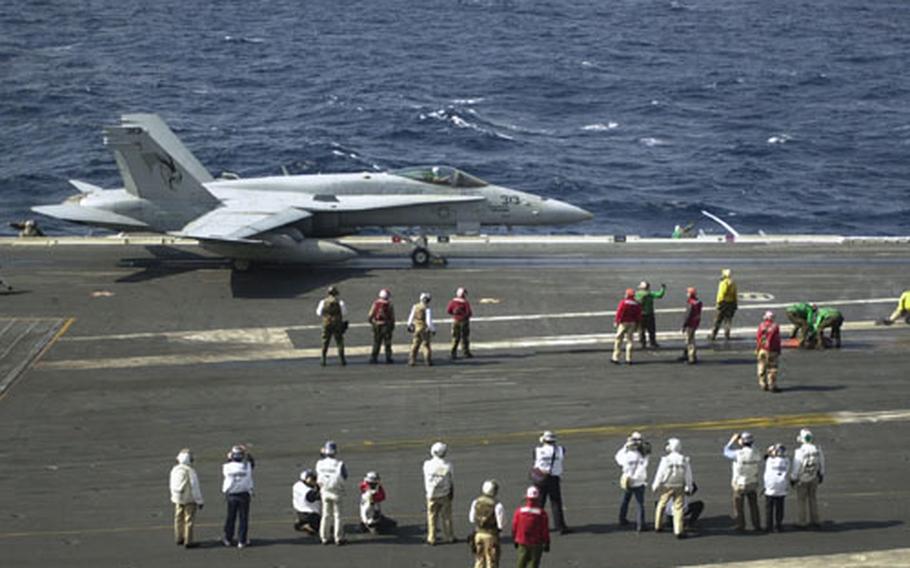 An F/A-18 is prepared to be catapulted off the deck of the USS Kitty Hawk Thursday. (Fred Zimmerman / S&S)

ABOARD THE USS KITTY HAWK &#8212; Seventeen media members were welcomed into &#8220;The Order of the Hook&#8221; as they &#8220;defied all laws of physical science and common sense&#8221; when they arrived Thursday on the USS Kitty Hawk by way of an arrested landing.

The writers, photographers and television crews were invited on board to get a taste of how the floating city operates.

It was also important to showcase everything &#8212; good parts and bad &#8212; to send a strong message that the ship&#8217;s mission is to ensure democracy, peace and stability, he said.

During the five-hour visit, media members were shown aircraft launch and recovery, a ready room with a briefing on Carrier Air Wing 5 and had a question-and-answer period with Parker.

On deck, sailors in green, yellow, red and brown jackets busily moved around as aircraft were launched and caught with tremendous impact, along with fumes and smoke. The colors indicated their roles, explained a Navy interpreter who accompanied the media tour.

The visit was an opportunity for Japanese media to gain firsthand knowledge of the aircraft carrier and its crew&#8217;s life.

&#8220;This is the first time in my life to get aboard an aircraft carrier,&#8221; said Akiko Ogawa, a television reporter from Tokyo. &#8220;I was overwhelmed with everything I saw today, the size of the carrier, things going on here and the striking power at the moment when a fighter jet takes off and lands on the deck.&#8221;

The one-day experience was also a good reminder for her of the tie between Japan and the United States as ally nations, she said.

&#8220;There are voices against the presence of U.S. military in Japan,&#8221; she said. &#8220;But at the same time, we have to face the reality that under the alliance agreement, the Japanese Self-Defense Force and U.S. military are working together to defend the country and this region.&#8221;

&#8220;This is my fourth time to visit Kitty Hawk, but each time I realize how dangerous [a] job it is to work on the carrier,&#8221; said newspaper reporter Tadashi Okano of the Asahi Shimbun. &#8220;Again, I realize the importance of training to maintain the skill of each crew member.&#8221;

While the reporters were on board, the ship participated in Annual Exercise 15, a practice session between the U.S. Navy and Japanese Maritime Self-Defense Force.

&#8220;In [these] Japanese waters, Japan is being protected by the alliance agreement,&#8221; Ogawa said. &#8220;To help people be aware of this reality, I think it is the responsibility of media to report more about the joint activities of SDF and U.S. military, such as this training.&#8221; When the day was over, media members again boarded the C-2A airplane from Fleet Logistics Support Squadron 30 and experienced the 1.5-second, zero to 150-knot thrill ride of a catapult launch.