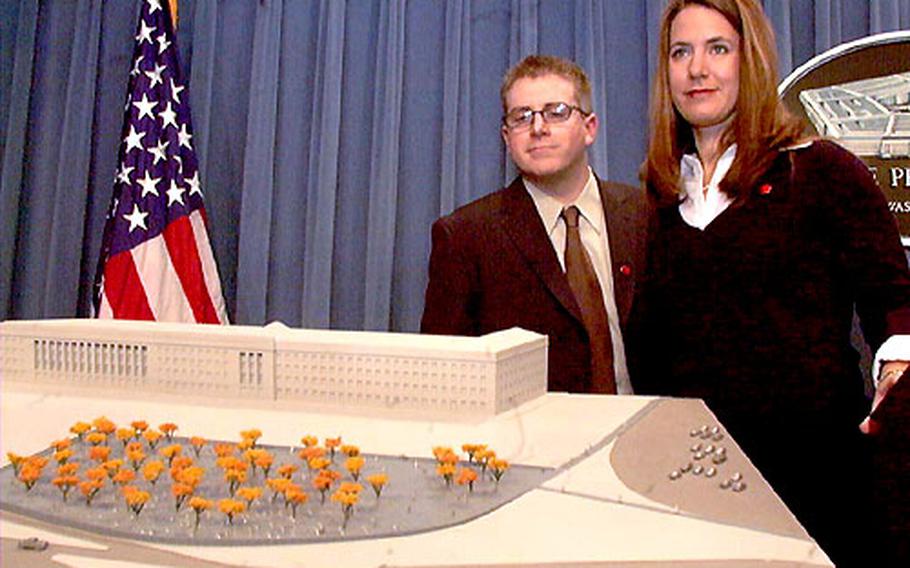 The winning design for the Pentagon Memorial is shown during the announcement Monday. The memorial will be built on a 1.93-acre plot on the Pentagon reservation near the spot where the attack occurred. (Sandra Jontz / S&S)

But one day, when the child is old enough, she&#8217;ll have a place to visit, where she can sit beneath the lacy shade of maple trees and think about the man whom she resembles strongly.

Dunn was pregnant with Allie when the attack occurred.

That place will be designed by New York architects Julie Beckman and Keith Kaseman, who met several years ago on their first day of graduate school at Columbia University.

The memorial will be made up of 184 benches, one for each of the victims either aboard American Airlines Flight 77 or working in the Pentagon when the airliner crashed into the building.

The name of each victim will be etched into the faces of the benches, which will sit atop individual pools of water lit from underneath.

The benches will be arranged according to the victims&#8217; ages, with the youngest placed at the entrance of the memorial &#8212; a change the designers incorporated after meeting with families.

&#8220;We wanted people to know that five children died,&#8221; Kaseman said. The first bench will bear the name of 3-year-old Dana Falkenberg, whose sister, Zoe, and parents also were killed on the flight.

The gravel-covered field will be hard enough to accommodate wheelchairs and strollers, &#8220;but soft enough to hear your footsteps,&#8221; Beckman said.

The designers want maple trees planted throughout because of the &#8220;lacy shade&#8221; they provide, Kaseman said.

The memorial will be built on 1.93 acres on a plot in the actual flight path Flight 77 took just before slamming into the building.

A team of architects, defense employees and families of victims made up the jury who picked the winning design from more than 1,000 entries.

&#8220;It really satisfied the needs of the families for a place of comfort and beauty, yet also satisfied needs of those around the world and the nation by explaining what occurred there,&#8221; said Wendy Chamberlain, whose father and stepmother, Robert and Zandra Ploger, were aboard the jetliner.

Pentagon construction expects said the memorial will cost between $5 million and $7.5 million and will be paid for by contributions, and possibly with money paid into a contingency fund more than a decade ago by nations that fought in the Persian Gulf war in 1991, said spokesman Dick McGraw.

Pentagon officials plan to award a contract to a builder on May 16 and break ground a month later.