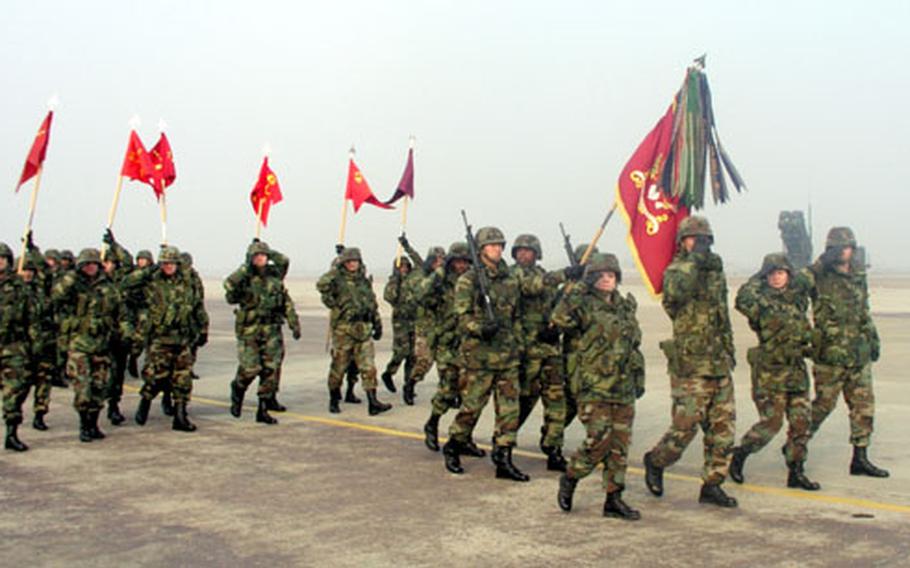 With guidons raised, troops of the Army’s 35th Air Defense Artillery Brigade pass in review at Osan Air Base, South Korea, on Friday morning during a ceremony welcoming them to the 8th U.S. Army. The brigade, newly headquartered at Osan, maintains eight Patriot missile firing batteries at four air bases around the peninsula. (Franklin Fisher / S&S)

OSAN AIR BASE, South Korea &#8212; The general who heads the U.S. Army in South Korea formally welcomed a newly deployed missile unit to the peninsula Friday, calling on its troops to maintain a sentinel&#8217;s &#8220;constant vigilance&#8221; and to pursue friendly relations with the Korean public.

Lt. Gen. Charles C. Campbell, commander of the 8th Army, made the remarks on the chilly, windswept flightline here in a ceremony for the 35th Air Defense Artillery Brigade.

The brigade recently completed deployment of its headquarters and other elements from Fort Bliss, Texas. It numbers about 1,400 troops and will operate eight firing batteries at four air bases around the peninsula.

It&#8217;s headquartered at Osan, 48 miles south of the Demilitarized Zone. It maintains missile batteries here and at Kunsan Air Base, a U.S. installation on Korea&#8217;s western seacoast, and at two South Korean installations &#8212; Suwon Air Base in central Korea and Kwangju Air Base in the southwest.

&#8220;I can promise that your service here will be a rewarding experience,&#8221; Campbell told the brigade&#8217;s soldiers, who stood in formation under a thickly overcast, slate gray sky.

&#8220;But it will also be challenging,&#8221; he said. &#8220;In order for our combined forces to remain a viable deterrent, you and the soldiers you represent must maintain constant vigilance. Like the thousands who have gone before you, you stand as sentinels on freedom&#8217;s frontier.

Campbell also underscored the need for forging good relations with the Korean public &#8212; a theme the U.S. military leadership in South Korea has emphasized nearly as much as the need for round-the- clock combat readiness.

&#8220;Korea is a land that has a unique, varied, and fascinating history and culture,&#8221; Campbell said. &#8220;Its people are kind and generous.... Know them. Both you and they will benefit. I encourage you to go out and see it, explore it, and share in the fantastic experience that Korea has to offer.

&#8220;As you do this, remember that we are guests in this land,&#8221; said Campbell. &#8220;Contributing to the local communities where our soldiers serve also is a part of the Army tradition here in Korea. Our soldiers strive to be positive members of the local community through various events and outreach programs.&#8221;

Besides bringing the brigade headquarters to South Korea, the Army also moved the 2nd Battalion, 1st Air Defense Artillery, and the 178th Maintenance Company, from Fort Bliss to Kwangju Air Base. Those units finished their move Thanksgiving Day.

Also assigned to the brigade is the 1st Battalion, 43rd Air Defense Artillery, which operates Patriot batteries at Osan and Suwon Air Base, and at Kunsan.

The battalion has been in South Korea since 1994 under the operational control of the Army&#8217;s 6th Cavalry Brigade. But it will formally become part of the brigade Wednesday.

The Army set up a full Patriot brigade in South Korea under a May 2003 agreement between South Korea and the United States to spend $11 billion to strengthen Korea&#8217;s military defenses.

The Patriot is designed to knock out incoming aircraft, cruise missiles and tactical ballistic missiles. The brigade fields the PAC-2 and newer PAC-3 Patriot variants.