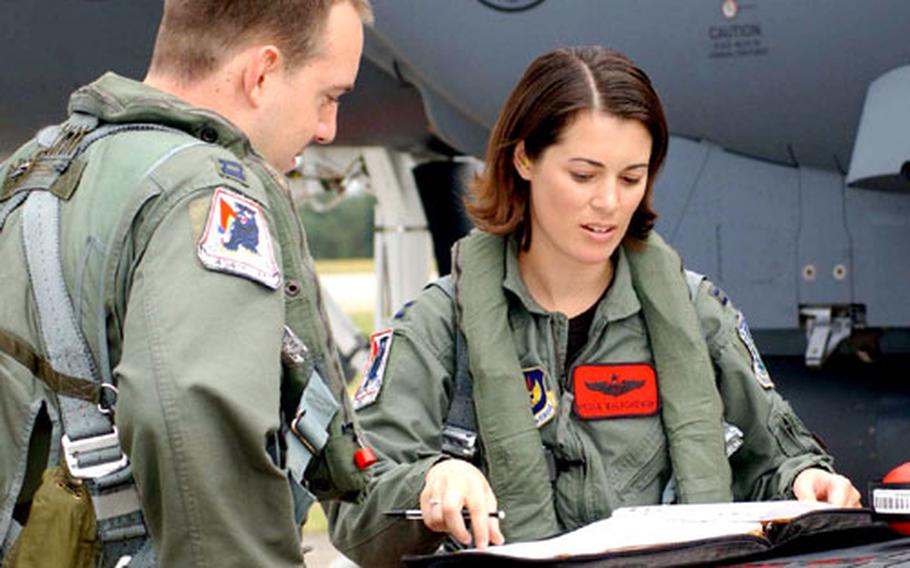 KAISERSLAUTERN, Germany &#8212; When Capt. Nicole Malachowski was a young girl, her sixth-grade class had to stand up and tell everyone what they wanted to be when they grew up.

When her turn came around, she told them she would become a fighter pilot someday.

Her teacher brushed her lofty goal aside, telling her girls can&#8217;t be fighter pilots.

At the time, he was right. The military didn&#8217;t allow women in the cockpit.

But she would prove him wrong.

The girl who dreamed about flying fighter jets made history last month by becoming the first female pilot to join the Air Force&#8217;s elite Thunderbirds jet demonstration team in the squadron&#8217;s 52-year history.

Malachowski, 30, an F-15 pilot with the RAF Lakenheath, England-based 48th Fighter Wing, was vacationing with her husband, Paul, who also is a pilot, on a cruise off the coast of Russia when she heard she made it.

The Thunderbirds perform at air shows in front of millions of people every year.

While she is the first female aviator to join a military jet demo team, few people who know her are surprised she got the call.

Her commander, Col. Dan DeBree, said the Air Force couldn&#8217;t have picked a better pilot for the No. 3 right wing position.

Joining the team will be a sort of homecoming for Malachowski, who went to high school in Las Vegas. The Thunderbirds are based at nearby Nellis Air Force Base in Nevada. Her parents still live there and she credits them for helping her fulfill her dreams of joining the Air Force and becoming a pilot.

She decided to be a pilot before she announced it to her middle school class. When she was 5, her parents took her to an air show. Since then, she was hooked on flying.

She worked on getting her private pilot&#8217;s license before she could get her driver&#8217;s license. In high school, where she also was a runner-up for homecoming queen, the Civil Air Patrol awarded her a scholarship to pay for flying lessons.

While she never let go of her dream of flying fighters, it wasn&#8217;t until after she graduated from high school that the Air Force began allowing women to fly fighter jets. She was an Air Force Academy cadet in 1993 when the ban was lifted.

She said she doesn&#8217;t know if her selection will help recruit more women to the aviation ranks, but she is enthusiastic about representing the Air Force at air shows across the globe.

&#8220;I realize that being chosen to be the first Thunderbird pilot is something that is maybe new and different and I&#8217;m humbled by the fact that anybody would use the term &#8216;pioneer.&#8217; (But) my goal is to just join the team, bring whatever skills and strengths I can and try and represent our Air Force with honor.&#8221;