Mounted in the front seat of a Humvee, an experimental video system offers several views of the area around the vehicle, including one of Sgt. 1st Class Charles Hickman Wednesday in Grafenwöhr, Germany. The system is one of a number of proposed Humvee improvements developed by V Corps operations officer Maj. David Kosinski that also include extended bumpers, fold-down floodlights and a new door design. (Ben Murray / S&S)

Mounted in the front seat of a Humvee, an experimental video system offers several views of the area around the vehicle, including one of Sgt. 1st Class Charles Hickman Wednesday in Grafenwöhr, Germany. The system is one of a number of proposed Humvee improvements developed by V Corps operations officer Maj. David Kosinski that also include extended bumpers, fold-down floodlights and a new door design. (Ben Murray / S&S) 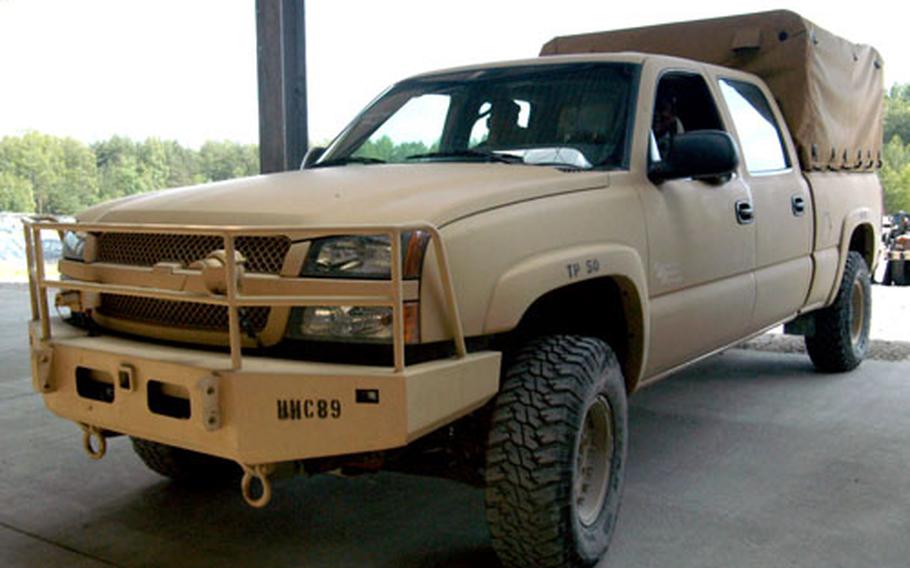 Developed in partnership with an organization called the National Automotive Center, this prototype medium-duty truck will be field-tested in Iraq this winter to see if the Army wants to pursue it as a future logistics workhorse. (Ben Murray / S&S)

GRAFENW&#214;HR, Germany &#8212; In an empty mess hall at the Grafenw&#246;hr training area on Wednesday, software trainer Gerardo Ritchey sat in front of a laptop, a small microphone in his hand.

Speaking a greeting into the microphone, Ritchey watched as a computer-generated U.S. soldier bowed slightly and touched his chest, saying the same words to a pair of Iraqi men sitting at a cafe.

The three had a short conversation, Ritchey speaking through the soldier on the screen, and then he moved on, jogging through Baghdad streets in a video-game environment unmistakably reminiscent of free-for-all shooting extravaganzas such as &#8220;Grand Theft Auto.&#8221;

But the point of this game, called the Tactical Language Training System, isn&#8217;t to show violence and mayhem, it&#8217;s for the soldier at the keyboard to interact with various civilians, teaching the trooper some survival basics of the Iraqi language.

The TLT System was one of several emerging military technologies on display at Grafenw&#246;hr last week, where developers took advantage of the concentration of high-ranking officials present for the Urgent Victory/Unified Endeavor exercises to show off their newest products.

Created by a team at the University of Southern California and picked up by the Defense Advanced Research Projects Agency, the TLT program is already being used to train Marines for Iraq deployments, Ritchey said.

Among the other new gadgets at Grafenw&#246;hr being proposed for possible military use is a compact video surveillance system for Humvees and other vehicles that allows troops to see and digitally record images both in front of and behind them.

Developed by V Corps civil military operations officer Maj. David Kosinski, the system uses front- and rear-mounted digital video cameras to monitor &#8212; and zoom in on, if needed &#8212; wide areas around the vehicle. Images from the cameras are displayed in real-time on a thin, tablet monitor mounted by the dashboard that allows troops in the vehicle to see what&#8217;s behind them and what may be coming up far ahead of them.

All images are stamped with the date, time, altitude and global positioning system-provided location coordinates to help enhance the information they can provide analysts, Kosinski said.

Costing about $12,000 per system, the cameras are backed by a small but powerful computer that&#8217;s easily transported and can hold 55 hours of video, Kosinski said.

As an added feature, troops can also get a wireless, hand-held remote camera that a soldier can take out of the vehicle and use to instantly send images back to the Humvee.

That is, if Humvees are still in use in years to come. Also on display at Grafenw&#246;hr this week is a prototype utility truck to be tested downrange for the first time on V Corps&#8217; upcoming deployment.

Though currently unarmored, if the truck proves useful, heavier versions could be tested, Nestor said.