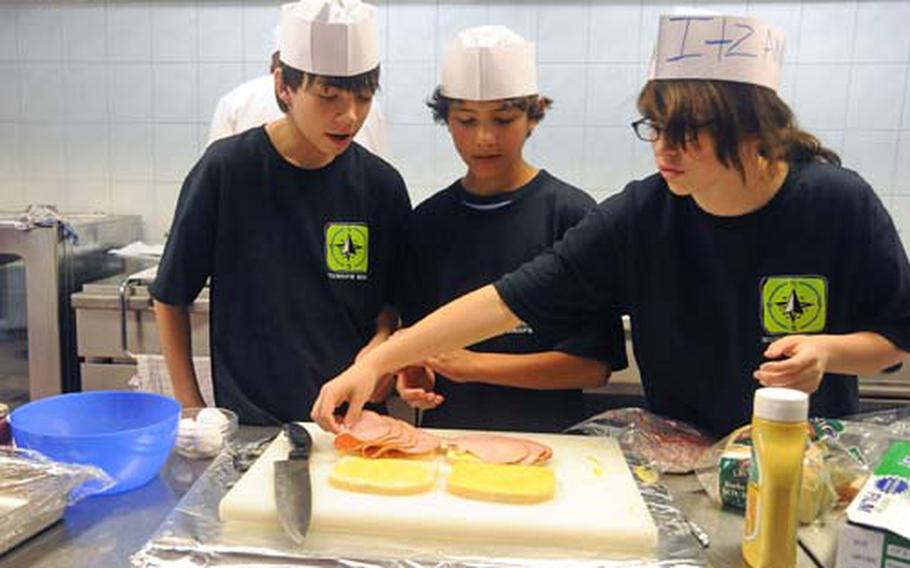 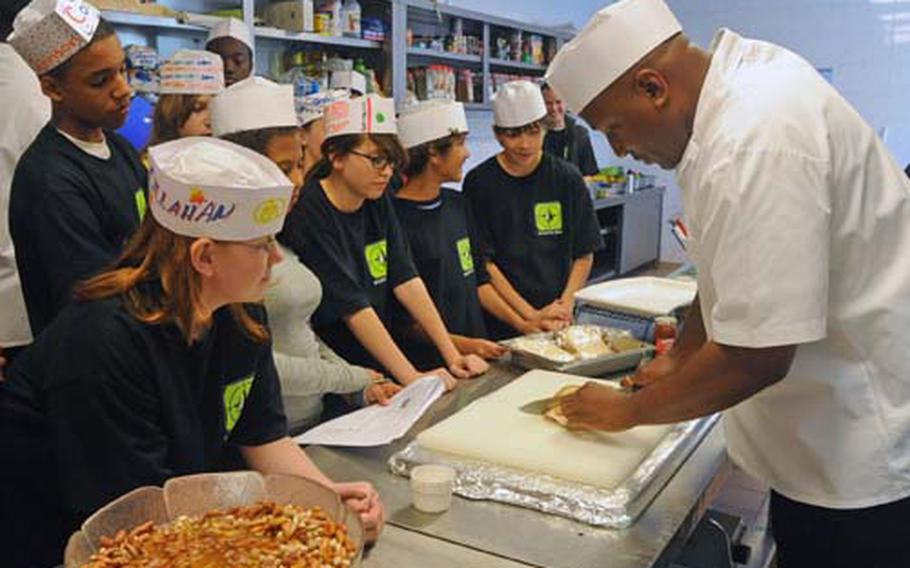 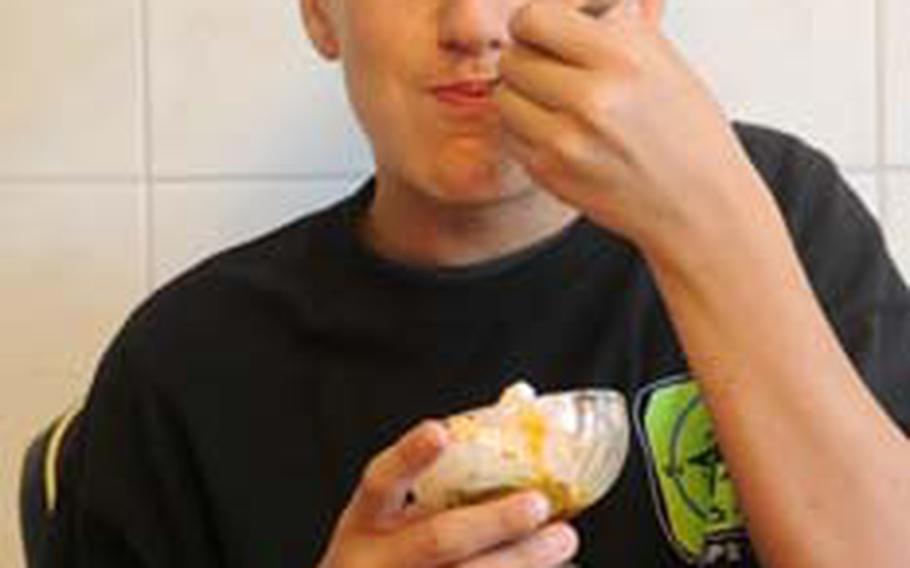 Austen Clark from Sigonella, Sicily, tries a dessert he made. When chef Sgt. 1st Class Howard Shakespear asked the kids for good cooking experiences, Austen said he makes the world&#39;s best burgers. Shakespear said he&#39;d be stopping by next time he is in Italy, to taste them. (Michael Abrams / S&S) 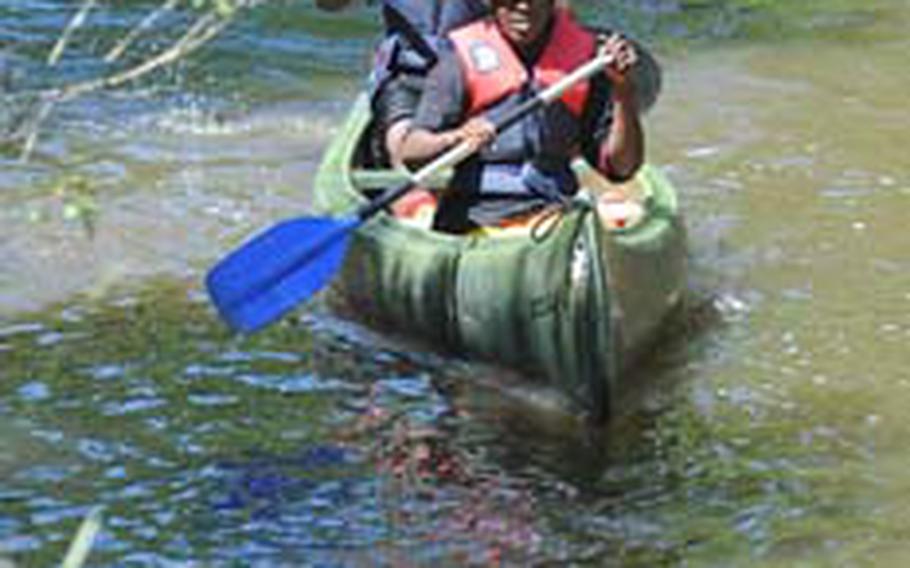 Rayshan Clark of Vilseck and Dimitri Clarke of Ansbach, paddle up the river during an outdoor education class. (Michael Abrams / S&S) 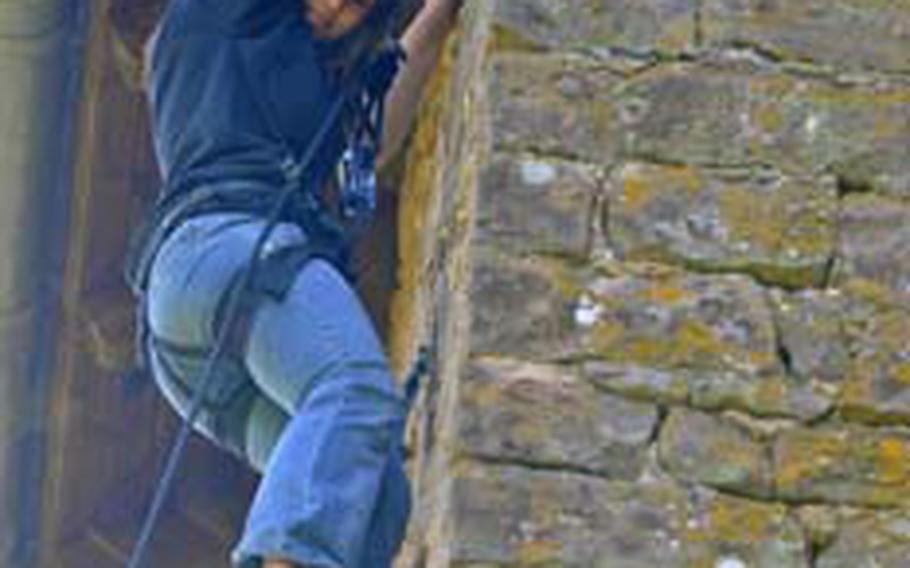 Kaitlyn Martin from Vicenza , Italy, looks for a foothold before making her way to the top of the building during a rock climbing session. (Michael Abrams / S&S)

BITBURG, Germany &#8212; Most of them had more cooking disasters to share than triumphs: blackened brownies, charred cookies, soupy banana bread.

But the teens working the kitchen at Camp A.R.M.Y. Challenge, a weeklong sports and fitness camp, had a motive to become better chefs. With many of their parents deployed, someone needed to know how to make a decent sandwich.

Teaching the camp&#8217;s first cooking class was Sgt. 1st Class Howard Shakespear, who has fed hungry soldiers for 16 years. He admitted to his students that in his early days in the mess hall kitchen, he ruined about $300 worth of turkey and gravy.

Then he set a golden-brown, gooey Monte Cristo sandwich before them. Hands shot up to be the first to try it. A self-described sandwich connoisseur, Shakespear wanted to teach the kids ways to liven up boring cold cuts.

"With just a few ingredients," he said, "they now know how to make a warm Monte Cristo or a sweet-and-spicy turkey sandwich."

About 140 youths from 16 bases around Europe attended the camp, which was being held in Bitburg. The culinary class was, by far, the most popular, getting more participants than soccer, basketball, or track and field, said Joe Marton, Child and Youth Services specialist and Camp A.R.M.Y. Challenge director.

Austen Clark, 14, had traveled all the way from Sigonella, Sicily, to take part. The best part was "making your own food and then eating it," Austen said, as he devoured a sherbet sundae. He added that he would share his newfound culinary skills with his parents and friends.

Many of the more experienced cooks worked their way around the kitchen with aplomb, cracking eggs with ease and effortlessly flipping sandwiches on a hot griddle.

With moms and dads deployed, many of the camp&#8217;s coaches and counselors find themselves giving quasi-parental advice.

Track coach Darryl Jones recalled talking with a young man about whether he should try out for wide receiver on his high-school football team.

"That&#8217;s a conversation he would normally have with his dad," Jones said.

Besides the cooking class and sports programs, campers also took part in an outdoor adventure program. They paddled canoes, climbed rock walls and tiptoed across high wires in the treetops.

Climbing the face of a brick building, 13-year-old Kaitlyn Martin of Vicenza, Italy, struggled to find one last nook for her foot. "This is so scary," she yelled down to the crowd watching her. But still she made it to the top of the 35-foot wall.