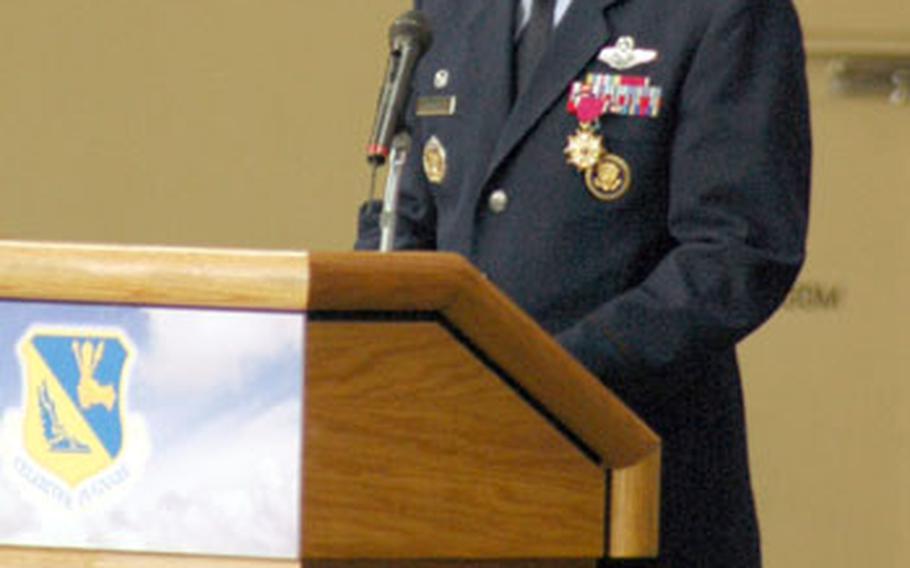 YOKOTA AIR BASE, Japan &#8212; Thanking the community for its hard work and support, Col. Jeff Newell bid farewell to the 374th Airlift Wing and Yokota during a change-of-command ceremony Tuesday.

Newell handed over command of the wing and the base to Col. J. Marcus Hicks during a ceremony presided over by Lt. Gen. Edward A. Rice Jr., commander of U.S. Forces Japan and 5th Air Force.

"By any measure and every measure the wing has enjoyed success for the last two years," said Rice.

Accomplishments during Newell&#8217;s tenure included providing 100 percent of Pacific Command&#8217;s C-130 commitment to the Central Command area of operation, assisting in the airlift of cyclone relief supplies to Myanmar, and providing airlift support for the 2008 Beijing Olympics.

"Colonel Newell was selected for a short-notice assignment as the Director, Secretary and Chief of Staff Executive Action Group, Headquarters, U.S. Air Force, at the Pentagon in Washington, D.C.," she said in an e-mail to Stars and Stripes.

Hicks comes to Yokota from Joint Base Balad, Iraq, where he served as the commander of the Combined Joint Special Operations Air Component. Bryan said Hicks was slated to attend C-130 requalification training at Little Rock Air Force Base and will return to Yokota in June.

In his absence, Col. Frank Eppich, the 374th Airlift Wing vice commander, will assume the responsibilities of the commander, she said.