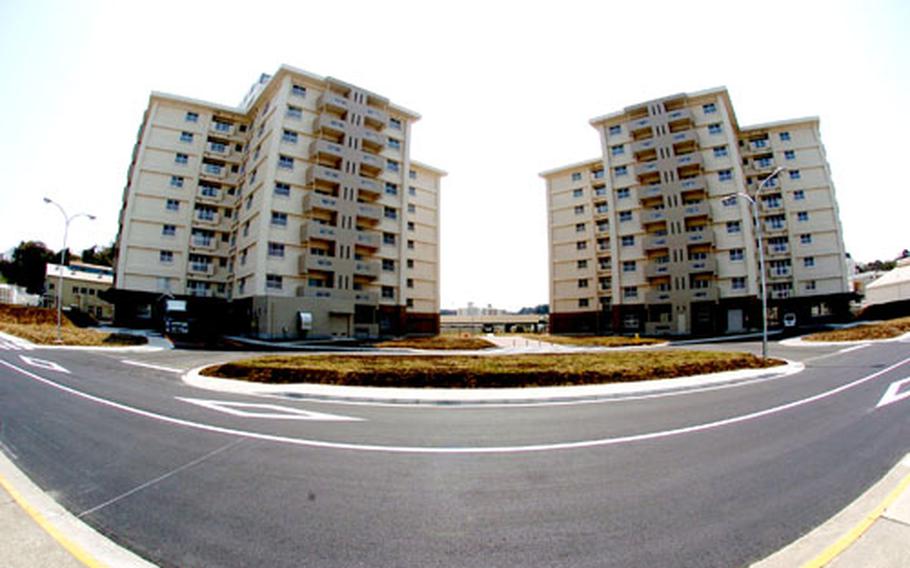 These two new towers opened Friday at Yokosuka Naval Base, Japan. The towers add another 136 units for family housing at the base. (Jim Schulz / S&S)

YOKOSUKA NAVAL BASE, Japan &#8212; Armed with a giant pair of scissors, base officials and the first couple selected to move in cut the ribbon inaugurating two new base housing towers at Yokosuka on Friday.

The nine-story Bara Heights and Ume Heights towers, named after seasonal Japanese flowers, have been under construction since about 2001.

They add 136 new units to the nearly 3,000 the Navy has available at Yokosuka and at Ikego and Negishi, the two housing areas that fall under Commander, Fleet Activities Yokosuka.

Like many base housing towers across Japan, the apartments feature three bedrooms, two baths, a spacious kitchen, porch and laundry room. They also have wooden trim and doors, a new feature to the towers.

The two new buildings and a parking structure, across the street from the Navy Lodge, will be available for families currently on the housing waiting list, said Ellen Spirito, director of Yokosuka&#8217;s Housing and Welcome Center.

Some families on the list have been waiting for as long as a year for an on-base apartment.

&#8220;We tried to meet the needs of the waiting list,&#8221; Spirito said. The most need has been for three-bedroom apartments, she said.

The apartments will go to junior and senior enlisted families, officers and civilians GS-12 and higher, she said.

The first to move in will be Senior Chief Petty Officer Scott Summerour, his wife, Cris, and two daughters.

The family waited about two years for a townhouse last time they lived in Yokosuka, from 1995 to 2001. They were holding out for a townhouse this tour as well, when the housing center told them about the new tower.

Summerour said he was just about to move from the Navy Lodge off base when they told him, &#8220;Have we got a deal for you&#8221;: Not only could he live on Yokosuka, but he could be the first to move into the new buildings.

The advantage of living on base is access to facilities and better heating in the winter, he said. He turned down housing at Negishi and Ikego to avoid a long commute to work.

The Summerours and other new residents were expected to begin moving in Saturday.

A number of agencies were involved in the project, including Japanese contractors, the Japan Engineer District of the U.S. Army Corps of Engineers, Naval Facilities Engineering Command Far East and Yokosuka&#8217;s facilities management office.

The buildings cost about $70 million, which was funded by the government of Japan under the Japan Facilities Improvement Program.

At the grand opening, Capt. Thomas Arnold, chief of staff for Commander, Naval Forces Japan, said the towers symbolize the strong relationship between Japan and the United States.