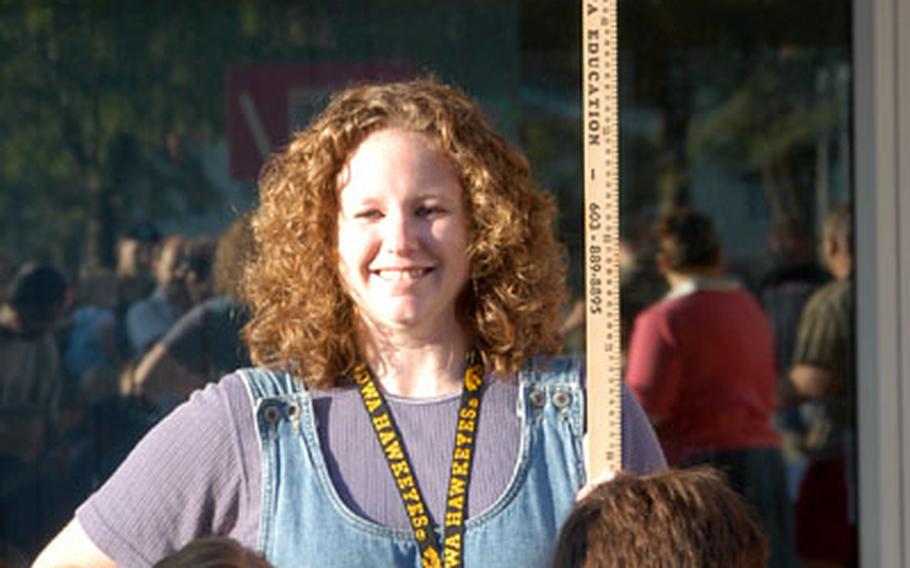 Jennifer LeVier, a multiage first- and second-grade teacher at Mannheim Elementary School, smiles as she welcomes pupils lining up for class on the first day of school. (Michael Abrams / S&S)

Jennifer LeVier, a multiage first- and second-grade teacher at Mannheim Elementary School, smiles as she welcomes pupils lining up for class on the first day of school. (Michael Abrams / S&S) 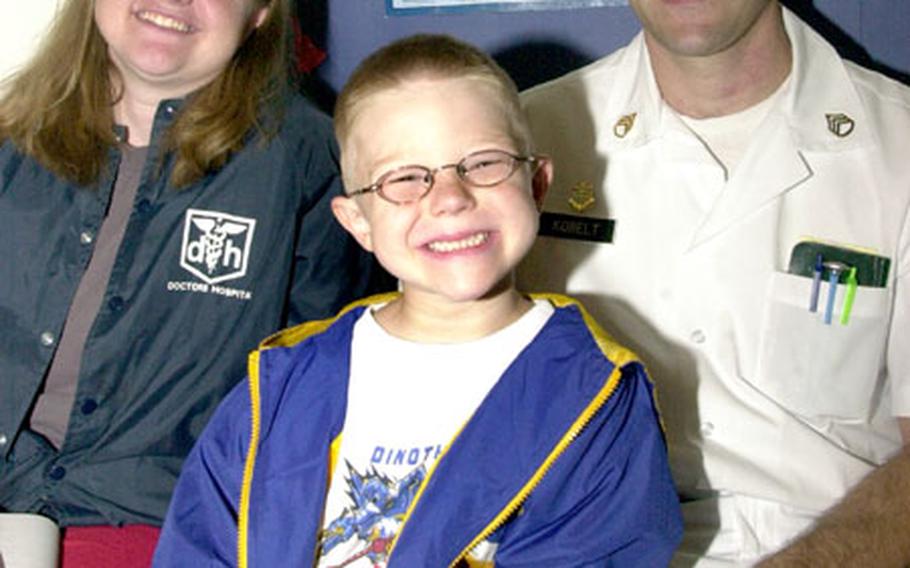 The megawatt smile says it all — he&#39;s ready for kindergarten, says Matthew Kobelt, 5. His parents, Staff Sgt. Richard Kobelt and Angela Kobelt, agree. But Matthew won&#39;t start kindergarten until Monday after a visit from his new teacher while other kindergartners started mix-grade classes Tuesday. This is the second year for home visits at Neubruecke Elementary in Baumholder, part of DODDS&#39; full-year kindergarten initiative. (Terry Boyd / S&S) Sgt. 1st Class Hinton Allred gives his daughter, Savannah, 7, a big hug before she marches off to class on the first day of school at Mannheim Elementary. Savannah is in a multi-age first- and second-grade class. (Michael Abrams / S&S)

BAUMHOLDER, Germany &#8212; Ah, the devil is in the details, even at the schoolhouse.

Teachers and administrators at Neubruecke Elementary were explaining new policies and fine-tuning enrollments Tuesday as several Department of Defense Dependents Schools initiatives come on line for 2004/2005 at all schools at U.S. military bases across Germany.

It&#8217;s all part of life at small elementary schools trying to comply with new DODDS requirements for full-day kindergarten and decreased class sizes.

But some details hadn&#8217;t filtered down to parents, such as Staff Sgt. Richard Kobelt and Angela Kobelt, who said they weren&#8217;t clear why their son Matthew, 5, wouldn&#8217;t be starting class until Sept. 13, rather than going Monday to a kindergarten class that&#8217;s split between first-graders and kindergartners.

By contrast, Katy Alden, 5, started kindergarten Tuesday, going to a multiage class with both kindergartners and first-graders, said her mother, Dr. Carol Joriman, who called the mixed class concept &#8220;an excellent idea.&#8221;

The differing schedules for children in the same grade at the same school allow small schools such as Neubruecke, with only 185 total enrollment, to offer full-time kindergarten &#8212; now mandated by DODDS.

Matthew will have an experience very different from Katy &#8212; his teacher will visit him at his home this week, a part of the DODDS full-day kindergarten initiative.

Crystal Newby, who will be Matthew&#8217;s kindergarten teacher at Neubruecke, and her assistant, Heidi Smith, will spend 20 or 30 minutes at each child&#8217;s house getting to know the pupil and the family.

The idea is to alleviate the child&#8217;s separation anxiety at leaving parents for school, Newby said.

If parents prefer that the teacher not visit the home, meetings take place on neutral ground.

Both Katy and Matthew&#8217;s parents say their children are ready for school. It&#8217;s up to DODDS officials to mix and match to get representative classes while trying to keep kindergarten through third-grade classes at a target of 18 children, said Beverly Erdmann, instructional systems specialist, early childhood education, at DODDS&#8217; Bavaria District Office in Kitzingen.

The new school year is the fifth and final year for implementation of two major initiatives, said Frank O&#8217;Gara, spokesman at DODDS headquarters in Wiesbaden. They are:

The reduced pupil/teacher ratio initiative calls for a target ratio of no more than 18 pupils per teacher for kindergarten through third grade, O&#8217;Gara said.The full-day kindergarten initiative established full-day programs at all elementary schools. Only Aviano, Italy, will not offer the program, because of construction delays, O&#8217;Gara said.A related &#8212; though separate &#8212; initiative is multiage classrooms, where mixed-age groups of children remain with the same teacher for several years, a teaching philosophy increasing in popularity in the United States, O&#8217;Gara said. Children are randomly selected and balanced by age, ability, special-needs children and gender. These groupings are designed to benefit pupils, not for reasons of economics, curriculum, or convenience, according to the DODDS Web site.

However, O&#8217;Gara said, at small schools such as Neubruecke, mixed classes may be a necessity if there are too few children to make single-grade classes impractical.

An informal teacher review of the home visit program received an &#8220;overwhelmingly&#8221; positive response, Erdmann said. DODDS has not surveyed parents on the visits, she said. But DODDS officials, she said, found in preschool classes that children often talk about the visit &#8220;all year long. &#8216;Remember that time you came to my house &#8230;?&#8217;&#8221;