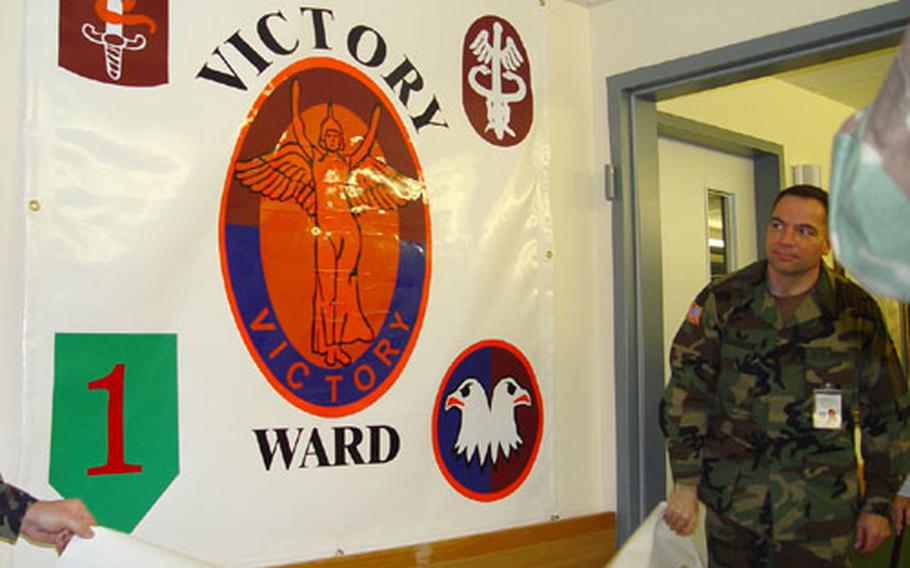 Staff Sgt. Ralph Castillo of the 12th Chemical Company in Kitzingen, Germany, reads a newspaper in the computer lounge of Würzburg Army Hospital&#39;s new Victory Ward, where 1st Infantry Division soldiers injured in Iraq now can be treated. Castillo, 35, broke both wrists a month ago in a fall from a truck at a base north of Tikrit. He has been staying in the ward since it opened in mid-April. (Steve Liewer / S&S) Hospital officials last month consolidated two medical/surgical wards totalling 15 beds, and moved it onto the fourth floor in place of a warren of former offices.

The new unit, christened Victory Ward at a ceremony last week, holds up to 24 patients.

While Landstuhl Regional Medical Center remains the first stop for most troops evacuated from the Middle East, April&#8217;s massive influx of casualties in Iraq put W&#252;rzburg into the picture.

Teel said for now the hospital is not handling seriously wounded soldiers, such as recent amputees or those with brain injuries. But 1st Infantry Division soldiers with broken bones or shrapnel wounds are being treated closer to home at W&#252;rzburg after brief stays at Landstuhl.

The hospital bought four televisions and DVD players for the ward, and the W&#252;rzburg Spouses Club donated $500 to purchase DVDs. The hospital also built a comfortable lounge with four computers connected to the Internet.

A local VFW post donated phone cards for each soldier. The hospital also gave each $250 to buy clothes and personal items.

Staff Sgt. Ralph Castillo, 35, of the 1st ID&#8217;s 12th Chemical Company, arrived April 8, four days after suffering a noncombat injury at his base north of Tikrit. As he was climbing out the back of a five-ton truck, the latch on the rear door broke. He fell to the ground, breaking both wrists.

After three days in combat hospitals in Iraq, Castillo flew to Landstuhl with two other 1st ID soldiers. A liaison officer sent them to W&#252;rzburg.

With both arms in casts to the shoulders, Castillo at first could do little for himself. The ward in W&#252;rzburg hasn&#8217;t yet topped eight patients, so he&#8217;s received plenty of personal attention. His wife, a W&#252;rzburg native, is in the United States sorting out immigration issues for his stepchild, but his in-laws have been able to visit him frequently.

Castillo said he likes both being with other soldiers injured in Iraq and being close to home. Although he can now do most things for himself, he still faces eight months of occupational therapy.

Teel said as hard as the staff worked to get the ward running, no one forgets it is a grim reminder of the sacrifices 1st ID soldiers are making in Iraq.