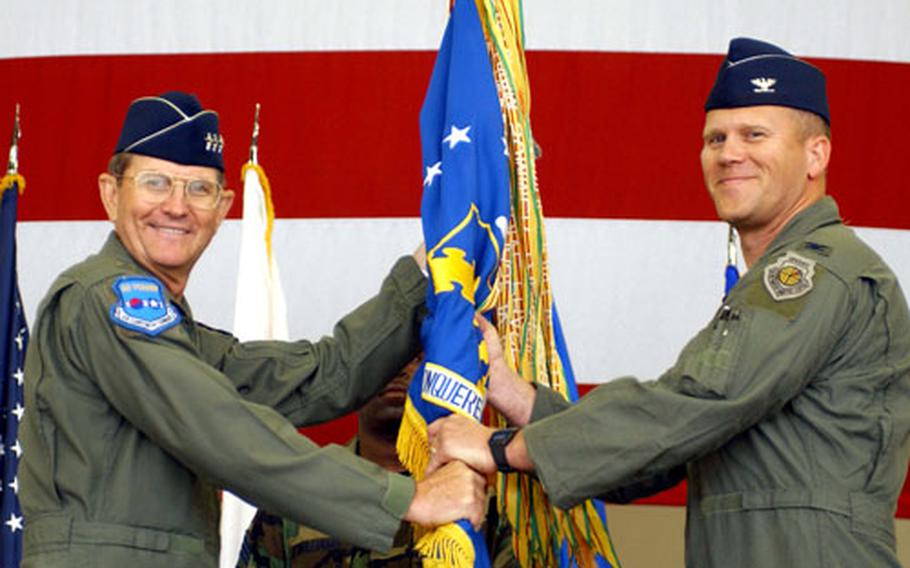 Lt. Gen. Garry Trexler, left, 7th Air Force commander, hands the 8th Fighter Wing’s guide on to Col. Jeffrey G. Lofgren during a change-of-command ceremony Monday at Hangar 3. Lofgren is the 45th Wolf — the name traditionally given the leader of the 8th Fighter Wing, which is known as the Wolf Pack. (Joshua DeMotts / U.S. Air Force)

He succeeds Col. Brian T. Bishop, who moves to a new Air Force assignment at the Pentagon.

The wing also is known as the Wolf Pack, and by tradition its commander is referred to as The Wolf. The tradition dates to the Vietnam War, when Col. Robin Olds gave the unit its nickname.

He was promoted to colonel in June 2004. His previous assignment was as commander of the 388th Operations Group, 388th Fighter Wing, at Hill Air Force Base, Utah.

Kunsan Air Base runs along South Korea&#8217;s western seacoast and has a reputation as an austere assignment with a high training tempo and few off-base recreational opportunities. Most of its 2,600 airmen serve one-year tours unaccompanied by family members.