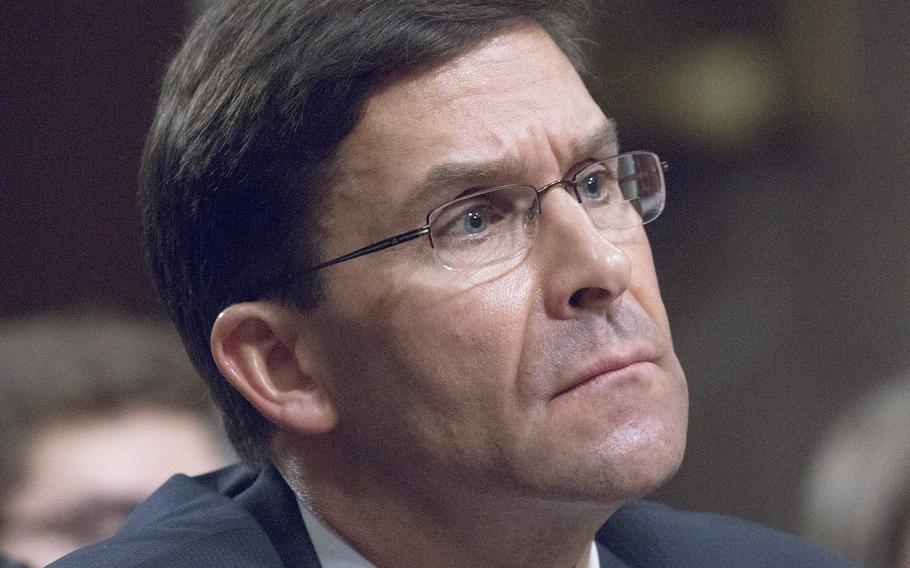 WASHINGTON – A Senate panel on Tuesday approved a new wave of President Donald Trump’s nominees for top military leadership posts, ending a long running drought for the administration to fill a slew of Pentagon vacancies.

The Senate Armed Services Committee on Tuesday confirmed four nominees, including former Raytheon lobbyist Mark Esper as Army secretary, in another sign of growing cooperation between congressional defense hawks and the Pentagon.

Sen. John McCain, R-Ariz., chairman of the Armed Services Committee, has said concerns of a revolving door between the Pentagon and the defense industry were compounded in recent months by a lack of transparency on many issues.

The committee voted for the confirmations during a Tuesday hearing for a new slate of Pentagon nominees.

“By the way, we had some difficulties” with the confirmation process previously, McCain told the new nominees Tuesday. “We will not stand for a lack of communication, a lack of responses to questions or we will exercise our constitutional responsibility, which is not moving forward with your nominations.”

For about three months, the committee only held one renomination hearing for Marine Gen. Joseph Dunford, chairman of the Joint Chiefs of Staff. That changed Thursday with Esper and three other nominees.

The nominations were initially held up over concerns the Trump administration was pushing for too many defense industry executives for top Pentagon posts, such as in Esper’s case, McCain had said.

Esper, for his part, has committed to recusing himself from Raytheon-related matters and submitted a letter to that effect, McCain said. Esper reportedly drew a total annual compensation of $1.5 million from his recent work for Raytheon Co., one of the country’s largest defense contractors. McCain signaled that under his watch, Esper would be among the last ex-defense executives to make it through the Pentagon nomination process.

Concerns of a revolving door between the Pentagon and industry were compounded in recent months by a rising conflict with top Trump defense officials over a lack of transparency about some issues. McCain had confirmed he was holding Pentagon nominations hostage as a result of the disconnect.

McCain railed the officials, including Defense Secretary Jim Mattis, a longtime friend, were not forthcoming on two deadly Navy ship collisions during the summer, a change in war strategy under loosened rules of engagement and the deadly Niger ambush last month.

But in a recent turn of events with several hearings on those matters and a personal visit from Mattis on Capitol Hill last month, McCain said he and other Armed Services Committee members were pleased with the new level of cooperation from the Pentagon and would lift the holds.

McCain said following Thursday’s hearing that his committee is moving forward with a backlog of nominations.

“We are moving forward with the nomination process thanks to the negotiations and communications with Secretary Mattis,” he said last week. “We have resolved our differences.”

The nominees faced a tough grilling in the wake of Sunday’s deadly church shooting outside San Antonio. The Air Force has said it failed to report to a national database the criminal domestic violence convictions of Devin Kelley, the man who opened fire on the congregation at the church, killing 26 people. The apparent failure allowed him to buy his weapons. Kelley was also court-martialed and received a bad conduct discharge.

“In this instance, there are 26 people who might well be alive,” Sen. Richard Blumenthal, D-Conn., told the nominees. “We will never be sure.”

All four are expected to be confirmed by the Senate panel on Thursday, during another hearing of a new slate of nominees, McCain said.