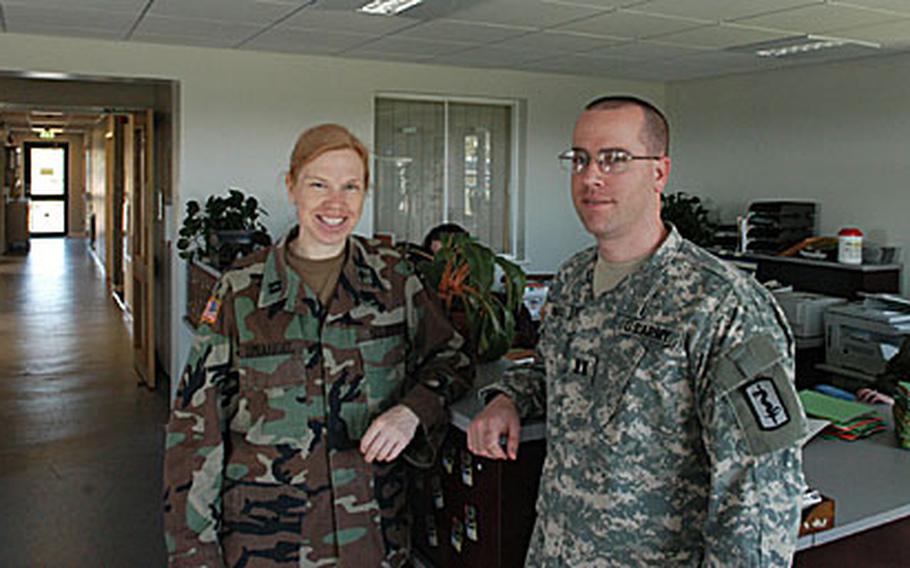 With the opening of an expanded and renovated veterinary clinic at RAF Feltwell, Army Capts. Mary Sprangel and Jeremy Bearss are ready to assist with all pet-related maladies. (Geoff Ziezulewicz / S&S)

RAF FELTWELL &#8212; It&#8217;s funny how some complications of overseas living never occur to you until they rear their ugly and inconvenient heads.

One night you&#8217;re home, the U.K. power adapter is humming along, your car is parked in that tiny driveway, and everything is assimilated and as it should be.

But then Teddy, your black Lab, starts whimpering and moaning, or Mittens the calico kitten has something funky running out of her eye. And overseas living bites you in the keister as you realize: Oh no, I need a vet.

In England, it&#8217;s a bit easier, no language barrier to surmount. But medical care for your pet can still be yet another daunting and expensive task to overcome.

Thankfully, the resources for Air Force pet owners in England just got upped a bit, with the opening last week of a new and expanded veterinary clinic at RAF Feltwell. Attached to the facilities for a military dog team, the clinic now features more space and amenities than previously were available for the handful of staff that cares for Air Force pets in the U.K.

The old facility down the street didn&#8217;t have much space at all, said Capt. Mary Sprangel, the officer in charge of the clinic, which falls under the Army&#8217;s U.K. branch of the Northern Europe Veterinary Detachment.

&#8220;The two exam rooms were the hallways, so people were tripping over the animals,&#8221; Sprangel said.

But now, the days of room shortages and other veterinarian requirements are gone. The new clinic boasts rooms for radiology and surgery, among other things.

The new clinic, which involved adding on to the military dog facility and renovations over the past two years, cost $160,000 and roughly doubles the amount of space the vets will have for their work, according to Capt. Jeremy Bearss, the branch chief. The new clinic also features a larger lobby to accommodate larger pets.

It also puts various care capabilities under one roof. Before the new facility was opened, animal care services were spread out around Feltwell.

While the veterinarians here do their best in the facility, they also make mobile visits to more remote locations such as RAFs Alconbury and Croughton, Sprangel said.

And while helping pets is a large part of the job, maintaining the military dogs for their mission is primary and local hires are not easy to acquire, Sprangel said, so folks with sick animals are asked to be patient.

For more information on the new animal clinic at RAF Feltwell, or when a military veterinarian will be visiting your installation, log on to www.48servicessquadron.com and click on the &#8220;veterinary clinic&#8221; link in the left column. Or, e-mail the clinic at: nevd.uk@lakenheath.af.mil